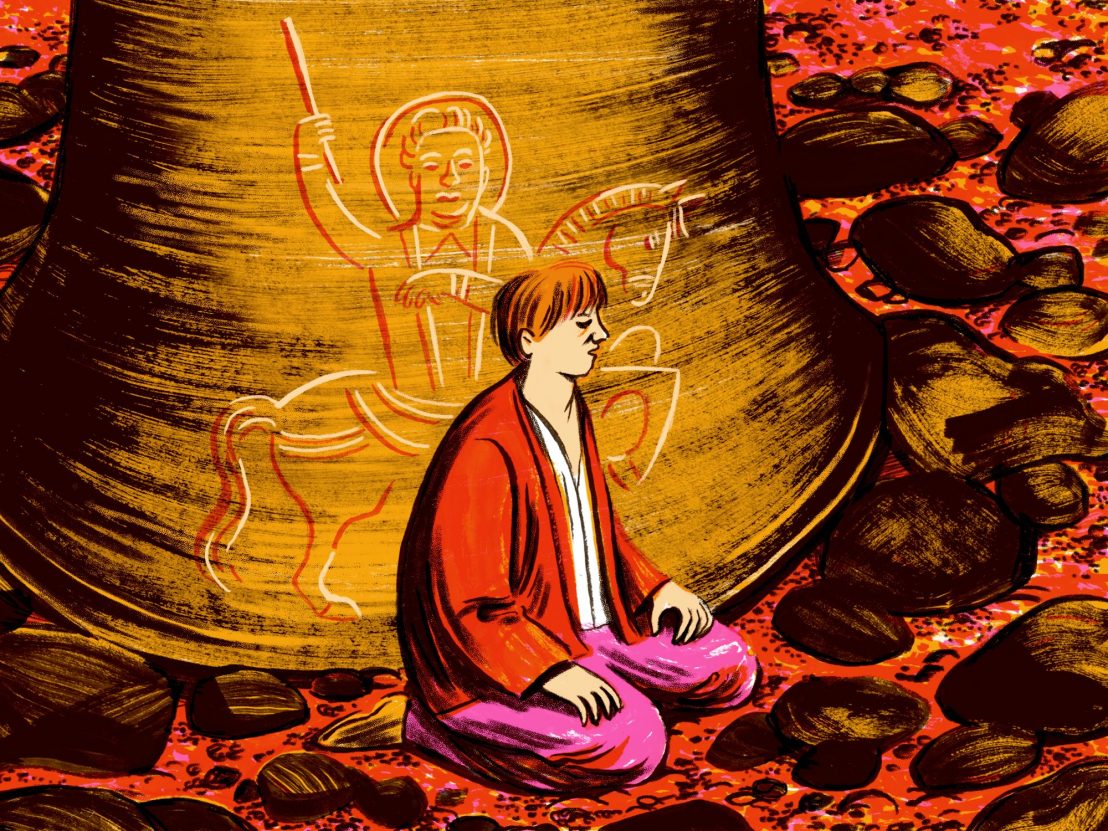 When singer-songwriter Julia Holter suddenly became obsessed with the sound of church bells back in 2010, a friend recommended she watch legendary Russian director Andrei Tarkovsky’s stirring 1966 film Andrei Rublev. It’s fair to say the film, which depicts medieval Russia as a brutal, uncompromising place, isn’t the easiest watch. Yet Holter instantly fell in love with its persistent use of bells and how they mark the passing of time, with their ethereal chimes powerfully cutting through the struggle of 15th century Russia.

“It’s a film that’s got a lot of suffering in it, but whenever the bell rings out it feels like Tarkovsky is showing that there is still a glimmer of hope on the horizon,” says Holter. “There’s something about the way the bell functions that is so spiritual to me, as the bell’s counting of time signifies something very poetic. I love that this one musical instrument could represent something so important.”

She continues, “There’s a scene at the end of the film where all the people erect this bell tower. The way the rope bluntly stretches symbolises the collective pain of the Russian people. When you hear the bells’ percussive clinking, you also hear a woman’s chanting, and it is so haunting and powerful; the way the non-diegetic and diegetic sounds work together is so genius.”

Holter’s music has long been described as avant-pop, with her albums known to switch unpredictably between gentle introspection and organised chaos – she’s just as inspired by Gyorgy Ligeti as she is Joni Mitchell. Holter believes this kind of juxtaposition is also present in composer Vyacheslav Ovchinnikov’s score for Andrei Rublev. “It’s obviously a very fragmented film that’s more about emotion than plot, and his score speaks to this, but very subtly,” she explains. “You can feel the sounds right in the pit of your stomach. I like that the score can create this atmosphere of dread but then knock you away with a gorgeous choir or string section. It has an element of unpredictability.”

A street jester dances with his last ounce of energy in the hope of being given some vegetables by admirers; starving, shivering peasants desperately eat snow as ants crawl across their bodies; a woman delicately braids her murdered friend’s hair; hungry dogs violently fight for just a morsel of food. These are all horrifying images, impossible to erase from the memory, but Holter says the way Ovchinnikov’s sparse score cuts through them is “deeply beautiful”.

“Ovchinnikov and Tarkovsky were great believers that film music should dissolve into a film and become an organic part of it.”

Tarkovsky’s film is loosely based on the life of painter Andrei Rublev, showing how religion and war forced Russia into revolution across his lifetime, and why his art was ultimately a great triumph over such pain and turmoil. But one of the reasons the Tarkovsky’ masterpiece, which for many years was banned by the Soviet Union, still packs such a visceral punch is down to the bold way in which it shows how the poor inevitably suffer the most whenever society undergoes a cultural metamorphosis. It’s a prescient idea. “This idea that it’s always the poor that struggle more deeply whenever there’s a revolution says so much about our world right now,” Holter agrees.

The way the film, and its music, shifts between light and darkness reminds me of Holter’s own work. “Everything is just vanity and decay,” Theophanes the Confessor tells Rublev in one memorable sequence, which encapsulates the themes of the morose lullabies present on Holter’s 2018 album ‘Aviary’. She even confirms that one of her more experimental songs, ‘Underneath the Moon’, was directly inspired by Tarkovsky’s film; its dream-like lyrics (“Writhing in the laughter like / The jester’s high”) directly reference the film.

Throughout Andrei Rublev, there are moments of thick electrical synths that don’t seem to go anywhere. However, Holter says this speaks directly to Tarkovsky’s vision for the future of film scoring. “In his book, ‘Sculpting in Time’, Tarkovsky says that electronic music has the ‘right capacity to be absorbed by a film’s sound’,” Holter recalls. “‘It can be hidden behind other noises and be distinct. It’s like the voice of nature. It can be like something breathing.’ The fact he was instilling this vision way back in 1966 is so clever.”

In recent years Holter has started scoring films herself, including the 2016 boxing documentary Bleed for This and 2020’s critically-acclaimed abortion drama Never Rarely Sometimes Always. She says she’d love to score a horror film next, which makes perfect sense: check out the surreal romance of ‘Hello Stranger’, a song that sounds like it was made with David Lynch in mind.

She admits film scoring requires, “a lot more restraint. I can’t go as crazy with the music as I don’t want to detract from the film, which I am in service to.” Yet you sense her admiration for Ovchinnikov’s work on Andrei Rublev has greatly helped her with this transition. “Ovchinnikov and Tarkovsky were great believers that film music should dissolve into a film and become an organic part of it. That even if something is dark, it should still be intimate and have a romanticism to it,” Holter adds, “I think they were on to something, don’t you?”