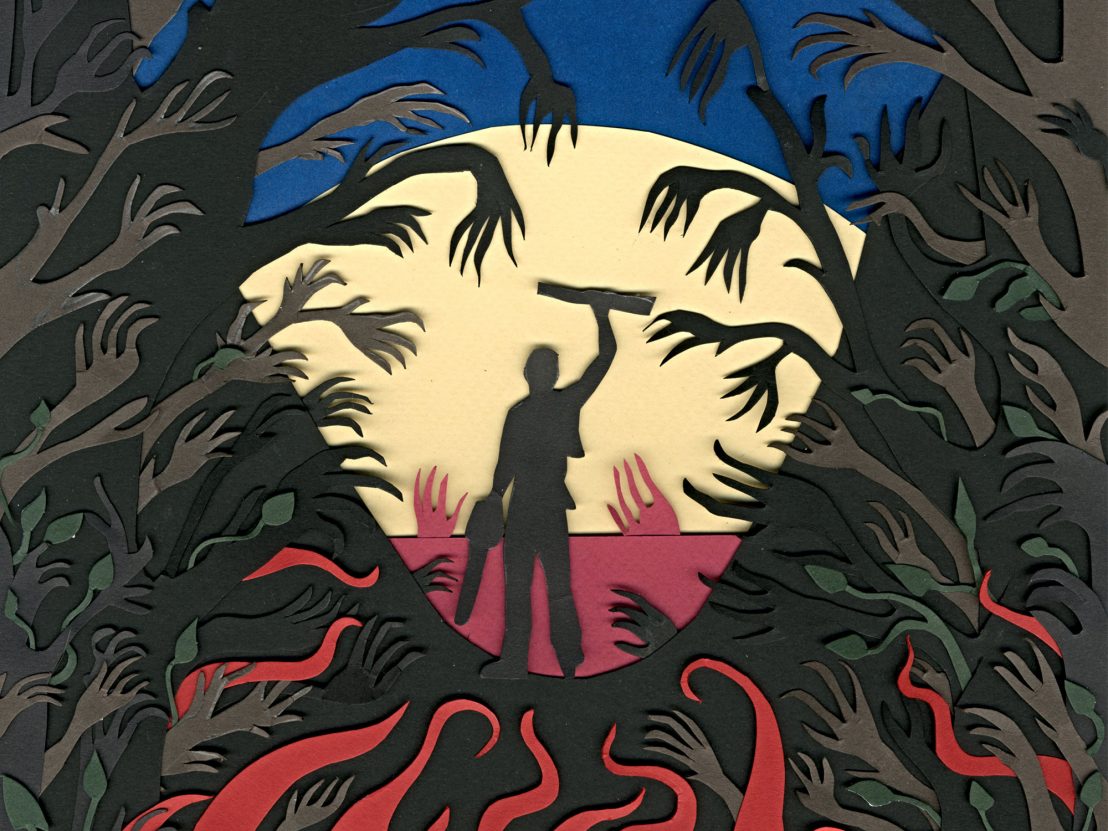 During his formative years, Sam Raimi spent much of his time making amateur Super-8 films with childhood friend Bruce Campbell. Raimi had just turned 20 when, in late 1979, shooting began on his feature debut, The Evil Dead. He and Campbell raised the budget themselves, begging friends, family and anyone who would listen, with only the $1,600 prototype short Within the Woods to establish the credibility of their intent.

The total outlay initially came in at $90,000, though it would eventually reach $350,000, accounting for post-production and marketing. What followed was, by all accounts, an arduous six-week shoot in and around an abandoned cabin during the Tennessee midwinter, with long hours, primitive facilities, multiple injuries, dwindling funds and frozen equipment that would have to be thawed at the derelict building’s fireplace.

The rest, as they say, is history. As well as bringing in a healthy return on investment ($29.4 million at the box office), The Evil Dead has variously been praised by Stephen King, vilified by Mary Whitehouse, cut to ribbons and banned in several countries (incredibly, until as recently as 2016 in Germany); it has become a home video best seller, spawned multiple sequels (both official and unofficial), a remake, a musical, a TV spinoff series, video games and comic book crossovers; it has secured lasting careers for Raimi and Campbell, and a permanent place for itself in popular culture. It is now frequently recognised as one of the all-time best entries in the horror canon.

This passage from tiny indie production to genre great is partly down to Raimi’s great ambition and energy as a filmmaker who, instead of allowing a lack of funds to get in the way of his vision, let necessity be the mother of invention. His frequent use of heavily canted angles, shooting characters and their environment from seemingly every which way except dead-on, brings a (crucially affordable) sense of skew-whiff unease to the film’s visual style. Unwilling to restrict himself to tripod or handheld shots – the defaults for low-budget filmmaking – Raimi improvised cheap alternatives to expensive rigs, all in the service of ensuring that The Evil Dead looked a whole lot better than its modest budget promised.

Cabin-in-the-woods was born of camera-on-the-wood: a dolly cam effect was realised by slathering vaseline on a plank of wood and literally sliding the camera along it; and the effect of a ‘low mode’ steadicam, recently developed and popularised in Stanley Kubrick’s big-budget The Shining, was simulated by having two operators run along on either side of a two-by-four on which the camera had been mounted.

The opening, disembodied ‘track’ across a misty lake’s surface was created by Campbell, in the water, pushing a dinghy in which Raimi held the camera. For the final shot, the camera was fixed to a speeding bike. It was precisely because these ‘shaky cam’ shots never came close to achieving the smoothness of genuine steadicam that they evoke the POV of something otherworldly, beyond not only the sightline, but also the experience, of the viewer.

Of course, what is good for the viewer need not be good for the cast. The cheap, thick contact lenses used to give the characters a demonic appearance took 10 minutes to put in, and could only be worn for 15 or they would damage the eyes; the dyed karo syrup in which Campbell was regularly spattered took hours to remove. Towards the end, the practical effects that show two characters melting on-screen are very obviously claymation.

Yet Raimi has three techniques which he deploys together to help his viewer overlook the cracks and seams in some of his more obviously bargain-basement effects work. First, there is the punchy pace of Edna Ruth Paul’s editing (with assistance from a young Joel Coen), which never gives viewers breathing space to dwell too long on anything. Second, there is the sheer relentlessness of the blood and gore that Raimi throws at the screen, stunning us into submission.