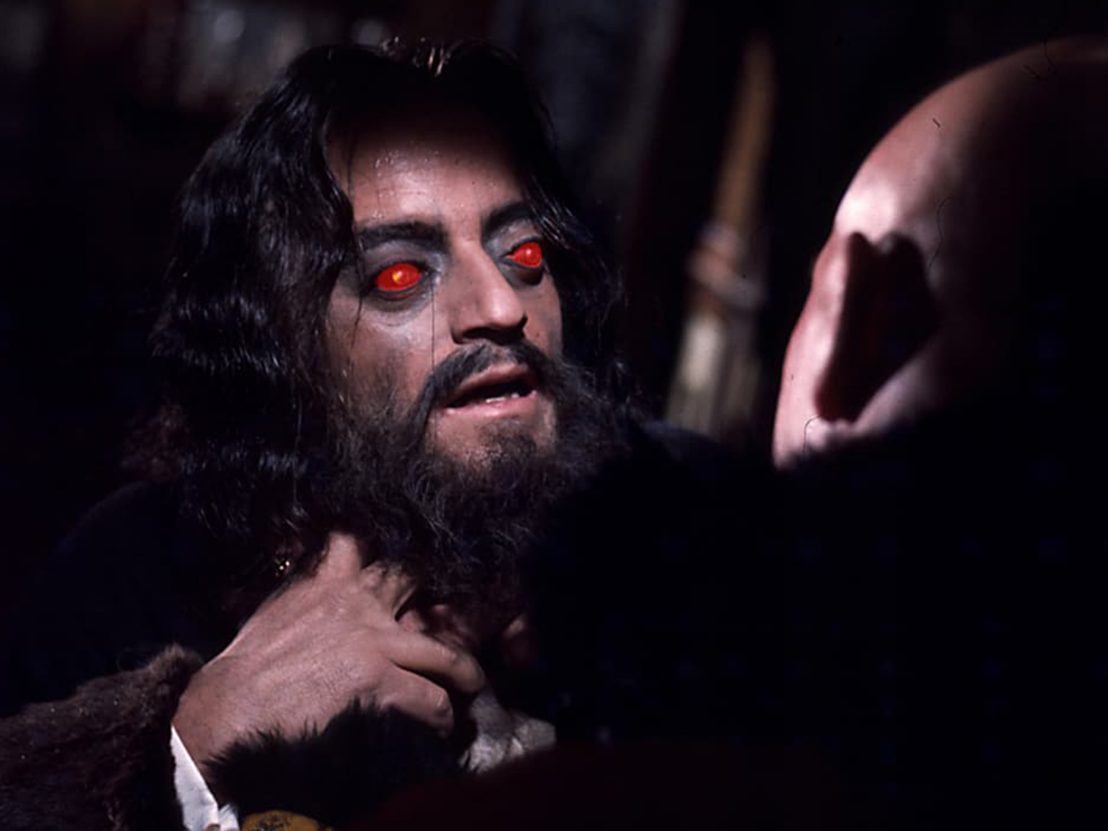 The novella ‘Who Goes There?’, published in 1934 by John W Campbell Jr under his pen name Don A Stewart, has left a considerable mark on cinema. First there was Christian Nyby’s loose adaptation, The Thing From Another World, and then John Carpenter’s much closer version, The Thing, which has gradually come to be regarded as one of the most important and influential sci-fi/horror films of all time. Yet in 1972 came Horror Express, which despite being set on the Trans-Siberian Express in 1906 rather than on a contemporary research base in Antarctica, clearly takes its cue from Campbell’s writing.

Directed by Spanish genre journeyman Eugenio Martín, and reusing train sets and models made for Martín’s spaghetti western Pancho Villa from the same year, Horror Express is a story of two rivals from the British Royal Geological Society who must work together when the ancient ape-like ‘missing link’ found frozen in a Manchurian cave by one of them comes back to life while being transported to England for study.

The creature is familiar enough from ‘Who Goes There?’: a body-hopping alien that is playing a very long game in seeking to advance parasitically up Earth’s evolutionary ladder until it can build a space craft to return it home, and that is more than happy to inhabit or kill the humans through whom it easily moves undetected. At the same time, these deaths on a train filled with multinational passengers is more suggestive of Agatha Christie’s ‘Murder on the Orient Express’, while the casting of Christopher Lee and Peter Cushing, as heroes Professor Sir Alexander Saxton and Dr Wells respectively, lends it the feel of a Hammer production.

With its locomotive-load of Polish nobility (Silvia Tortosa, George Rigaud), a Rasputin-like mad monk (Alberto de Mendoza), a dry-humoured bacteriologist (Alice Reinheart), a Russian police inspector (Julio Peña), a chess-playing engineer (Ángel del Pozo), an international spy (Helga Liné), and a cigar-chomping, whip-wielding Captain (Telly Savalas) and his band of Cossacks, there is, putting it mildly, a lot to take on board.

Barrelling along with the pace of a speeding train, Horror Express looks back not entirely nostalgically at British imperialist values from the turn of the century, when the world was a treasure trove for civilised-seeming English adventurers to plunder, and their finds were valued over the lives of foreign locals. These attitudes are embodied by arrogant, aloof, rapacious Saxton, who, as the film’s narrator, invites us from the outset to form a ‘judgment’ of his dubious conduct, while the benign Wells anticipates a kindlier, less colonial relationship for Britain with the rest of the world.

When these men end up working together as a team, we can see reflected in the combination of their two very different characters all the contradictions in Britain’s 20th-century foreign policy. The alien is at first opportunistic but eventually strategic in its choice of human targets for takeover, and one of the film’s most delicious ironies is that for all the cultural and intellectual superiority that Saxton likes to project, his mind is far less attractive to the evolution-leaping alien than that of Rigaud’s scientist.

The other tension in Horror Express is between religion and science, the former championed by de Mendoza’s wide-eyed zealot Father Pujardov, the latter by practically everyone else. A religious fundamentalist who rejects the theory of evolution, Pujardov naturally regards the red-eyed, brain-sucking alien as Lucifer fallen to Earth. Yet while he never abandons this interpretative frame, Pujardov is surprisingly quick, once he sees that ‘evil’ is in the ascendant, to change sides and make himself a servant to ‘the unholy one’.

Curiously, the alternative, rationalist view of what’s going on is never quite fully endorsed by the film itself. Saxton and Wells’ determinedly empirical approach to solving the mysteries on board the train may get them all the way to the end of the line, but it does not quite explain the effect that the alien’s presence seems to have on a religious icon in the Polish couple’s quarters. It is something of a mixed message, but perhaps that is only to be expected in a film so driven by the rattle and clank of different cultures, ideologies and genres clashing together. It’s a fun ride while it lasts, even if few of its images are likely to remain imprinted on your retina.

Horror Express is released by Arrow on Blu-ray in a brand new 2K version from original film elements on 11 February.