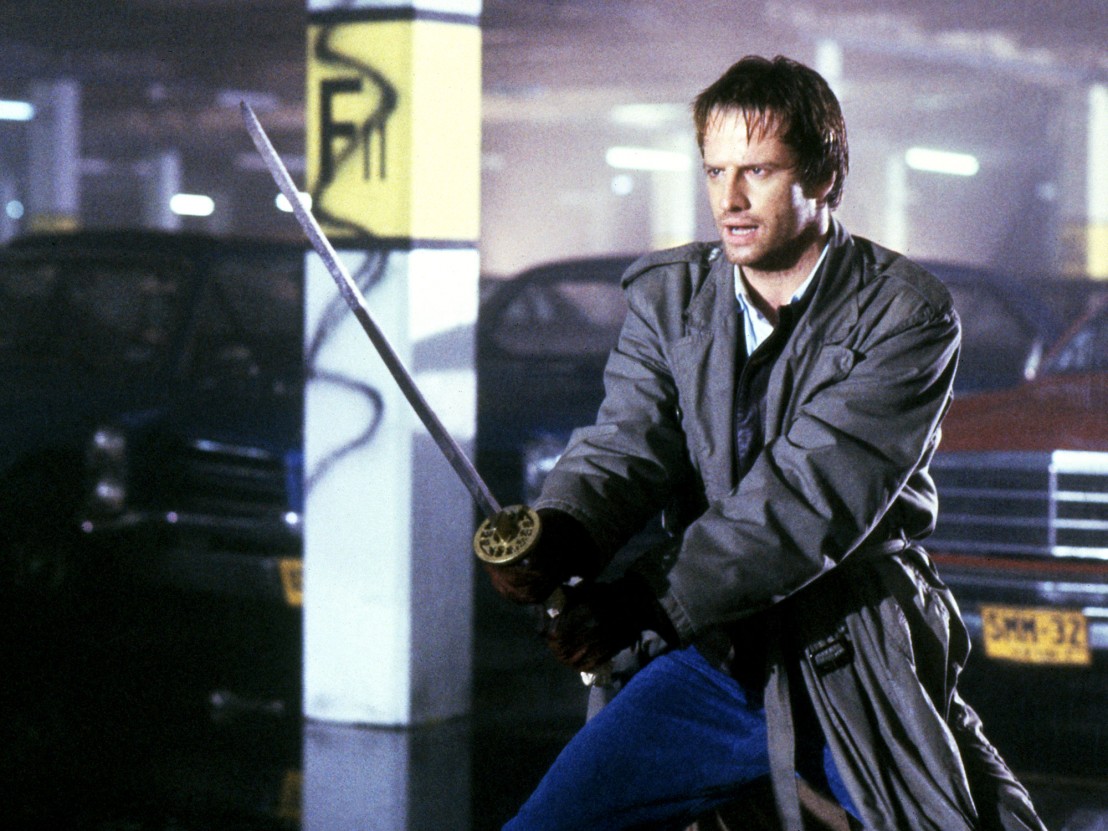 It may seem a bit dated 30 years on, but at the time of its initial release Highlander marked the culmination of many firsts. It was the first major feature film made by Australian music video director Russell Mulcahy, who used the opportunity to inject fast-paced flash-cutting techniques which gave Highlander a fresh and exciting visual narrative. The script was a college assignment written by UCLA undergrad Gregory Widen – his first sale – and it was also only Christopher Lambert’s second English-language feature after Tarzan epic Greystoke.

Highlander was also among the first films to employ Garrett Brown’s cutting-edge Skycam technology – what could easily be mistaken for drone footage today was in fact shot by a computer-operated camera suspended on wires. This new technology coupled with Mulcahy’s innovative approach meant that Highlander looked as stylish as one of his music videos without lacking in substance.

The film’s core theme – immortality – is universally appealing and brings with it a host of potential scenarios which have been extensively explored throughout cinema history. But in Widen’s unique take on the subject, Highlander is, in the end, a story about love and its existential flip-side, loneliness; which might just be the key to the film’s multi-generational appeal. At a recent screening of a stunning new 4k restoration of the film, Christopher Lambert said that over the years, people have come up to him saying how their father showed them Highlander, and they in turn introduced their sons to the world of Connor MacLeod and The Kurgan.

Despite spanning hundreds of years and various global locations, Highlander is predominantly set in 1980’s New York City and 16th century Scotland, where Lambert’s Connor MacLeod discovers that he is not like other men. Mentored by Sean Connery’s Juan Sánchez Villa-Lobos Ramírez, MacLeod learns the art of sword fighting and the secret to harnessing his special powers. With a Frenchman playing a Scot, and a Scot playing an Egyptian, it stood to reason that American Clancy Brown should play the Russian villain, The Kurgan. One of cinema’s all-time great bad guys, Brown’s turn as the twisted killer spawned two of the film’s greatest lines, which along with the iconic tagline ‘There can be only one!’ are still quoted with relish by fans today.

The immortals must battle until only one remains, and to them go the spoils of ‘the prize’. If The Kurgan is the last man standing the world is doomed, and so it’s up to MacLeod to ensure Kurgan’s defeat and his own salvation. Lambert and Brown were dangerously involved in the special effects that were used to create the electrified sword fights. The swords were rigged up to hidden batteries so that when the blades clashed, sparks (and a few shocks) literally flew.

Though it represented new ground for many, Highlander was not a first for rock group Queen. The band had previously provided the soundtrack to Flash Gordon, and had promised Mulcahy one track for Highlander. The offer to contribute music for the film was originally turned down by Marillion due to their touring schedule, but the opportunity was not wasted by Freddie Mercury and co. In fact, the band were so impressed by the rough cut that they decided to make music for the entire film, which ended up forming the basis for their top-selling album ‘A Kind of Magic’. With a total of eight Queen tracks, Highlander also featured a score by Michael Kamen (Die Hard, Robin Hood: Prince of Thieves); no doubt one of the contributing factors to the film’s enduring success.

Electric sword fights, ancient battles and tragic love; what’s not to love about Highlander? A hearty blend of action, fantasy, romance and humour, Widen’s screenplay contains authenticity and wit in good measure, matched by Mulcahy’s fearless filmmaking. It may have spawned a wave of carbon copies and a few inferior sequels – not to mention long-standing rumours about a remake – but the original fully deserves its legacy as a seminal piece of action fantasy.

A new 4K restoration of Highlander is available on Blu-ray/DVD 11 July.