The likes of A Nightmare on Elm Street and Scream owe something to Robert Deubel’s co-ed carve up Girls Nite Out. 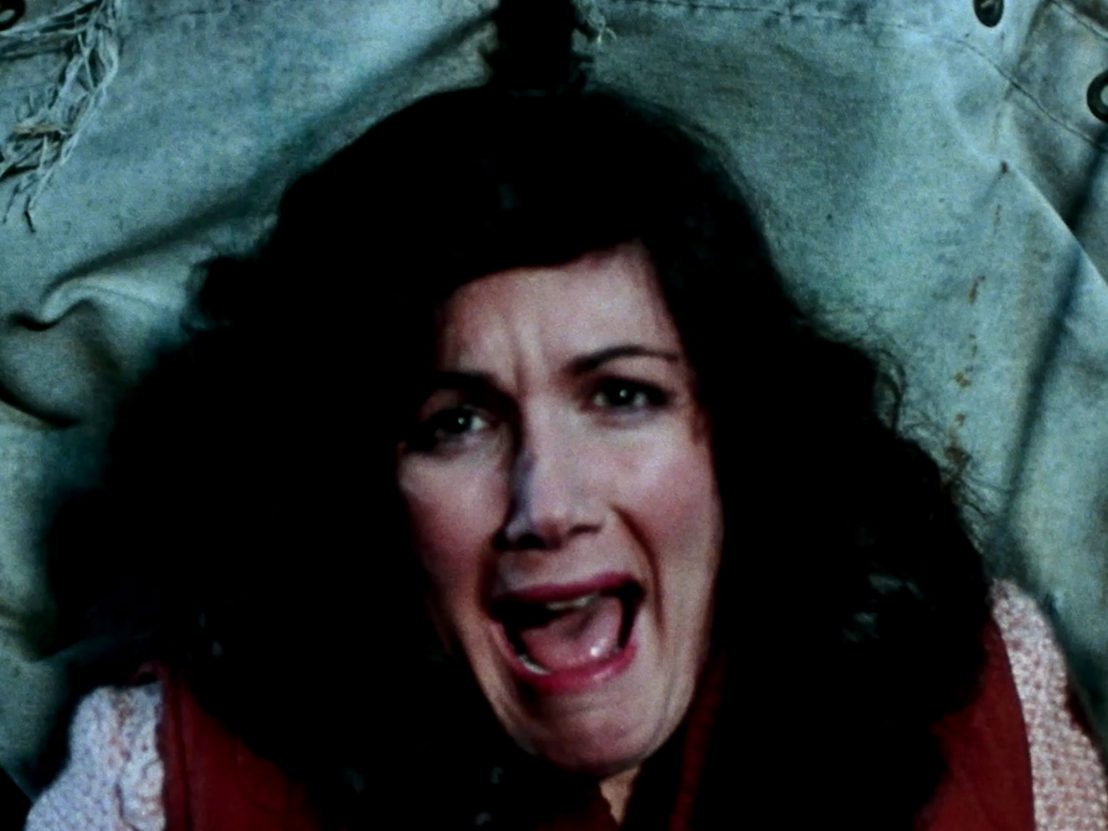 “You know it’s not enough that the school tries to screw you. Everybody else has to screw around with everybody else. Sometimes I think Lynn is the only loyal person left.”

This is some way into Robert Deubel’s Girls Nite Out, and the speaker is Teddy Ratliff (James Carroll), a charming basketball jock at Dewitt University. Barney (Tutanya Alda), the older woman who runs the campus diner, agrees that Teddy’s girlfriend Lynn Connors (Julia Montgomery) “is a really nice girl, and there’s not too many around anymore.”

Indeed, this institution in Westville, Ohio is full of randy co-eds keen to play the field, and for all of Teddy’s moral posturing, his eye too has recently been wandering from his beloved, loving Lynn to Dawn (Suzanne Barnes), who is herself otherwise attached but not uninterested. This is one of the innovations of Deubel’s slasher. For while by 1982 the subgenre already had a well-established convention whereby a killer’s victims were typically being punished for their entry into the world of adulthood, here it is not loss of virginity that guarantees their expedited mortality, but erotic betrayal – and there is no shortage of those betrayed.

When we first see Teddy’s basketball team the Bears in action near the film’s beginning, the game of his friend Pete Krizaniac (Mart McChesney) is off, because he has just been dumped by his long-term girlfriend Leslie Peterson (Lois Robbins). “I never could compete with Jack Daniels, basketball and Teddy Ratliff,” Leslie tells Pete later at the post-game celebration party, hinting that Pete’s friendship with his teammate might be more than merely homosocial.

At the same party, Mike Pryor (David Holbrook) gets increasingly riled as his girlfriend Sheila Robinson (Lauren-Marie Taylor) barely conceals her attraction to Michael Benson (Matthew Dunn). Mike eventually storms off in a rage, declaring all at the party ‘whores’. Lynn is advised by Sheila to try out other partners herself, on the grounds that Teddy is no doubt doing the same – and Teddy indeed has a subsequent fling with Dawn, leading Dawn’s boyfriend Bud Remington (Tony Schultz) to kick her out in anger. Evidently Dewitt’s campus is a place where these young people are learning not just their coursework, but also cruel lessons in love’s merry-go-round.

There is also a vengeful killer on the loose, who dons the bear costume of the basketball team’s mascot for a disguise, starts taking out members of the student body one by one as they participate in the annual scavenger hunt, and leaves cryptic, taunting messages for campus DJ Charlie Kaiser (Larry Mintz) and for the security guard Jim ‘Mac’ MacVey (Hal Holbrook, in one scene appearing with his actual son David) about these murders.

“The killer’s weapon of choice anticipates by two year’s Freddy Krueger’s bladed glove in A Nightmare on Elm Street.”

The most obvious candidate for killer would be Dickie Cavanaugh, who years ago had murdered his then girlfriend – and Mac’s daughter – Patty during a similar scavenger hunt at Dewitt. The problem, though, is that Girls Nite Out begins with Dickie found hanging in his room at the Weston Hill Sanitarium, so unless he has miraculously come back from the dead, someone else must be responsible. Amid all the jealousy, indignation and vindictiveness on campus, it could just be just about anyone.

The killer’s weapon of choice, a set of four knives strapped to the bear costume’s hand to form claws, anticipates by two year’s Freddy Krueger’s bladed glove in Wes Craven’s A Nightmare on Elm Street, while a certain self-consciousness about horror tropes looks forward to the postmodernism of Wes Craven’s New Nightmare and Scream by over a decade. Pete Krizaniac goes by the rhyming nickname ‘Maniac’, evoking the title of William Lustig’s 1980 slasher, and in Barney’s diner, in the scene where we first learn of this nickname, Pete also expressly does an impression of the late Mrs Bates from Alfred Hitchcock’s mother-loving ur-slasher Psycho.

Teddy too conjures the most famous scene from Psycho, as well as the Italian gialli that intervened between Hitchcock’s film and the slasher, by approaching a naked Dawn in the bath while himself wearing black gloves. In one further nod to the evolution of the subgenre, the killer will both make weird phone calls and leave a victim’s corpse in an attic, just like Bob Clark’s seminal early slasher Black Christmas. Girls Nite Out certainly knows its place in the horror tradition, and showcases that history while ringing its own small changes.

First released to regional US cinemas in late 1982 under the title The Scaremaker as a double feature with Jeffrey Bloom’s Blood Beach, and then re-released as Girls Nite Out in late 1983 with Juan Piquer Simón’s Pieces, Deubel’s debut feature initially made less of an impression than the more extravagant films with which it was paired. Yet it is respectful of slasher history, offering an ensemble of characters too messily complicated to be mere caricatures, and it locates its maddening trauma – unusually for the genre – in the amatory infidelities of its ‘players’. The final twist makes it less a descendant of, than a complementary twin to, Psycho, as once again a genetic/generic tradition is preserved by a murderous maniac.

Girls Nite Out is released on Blu-ray via Arrow Films on 16 May.