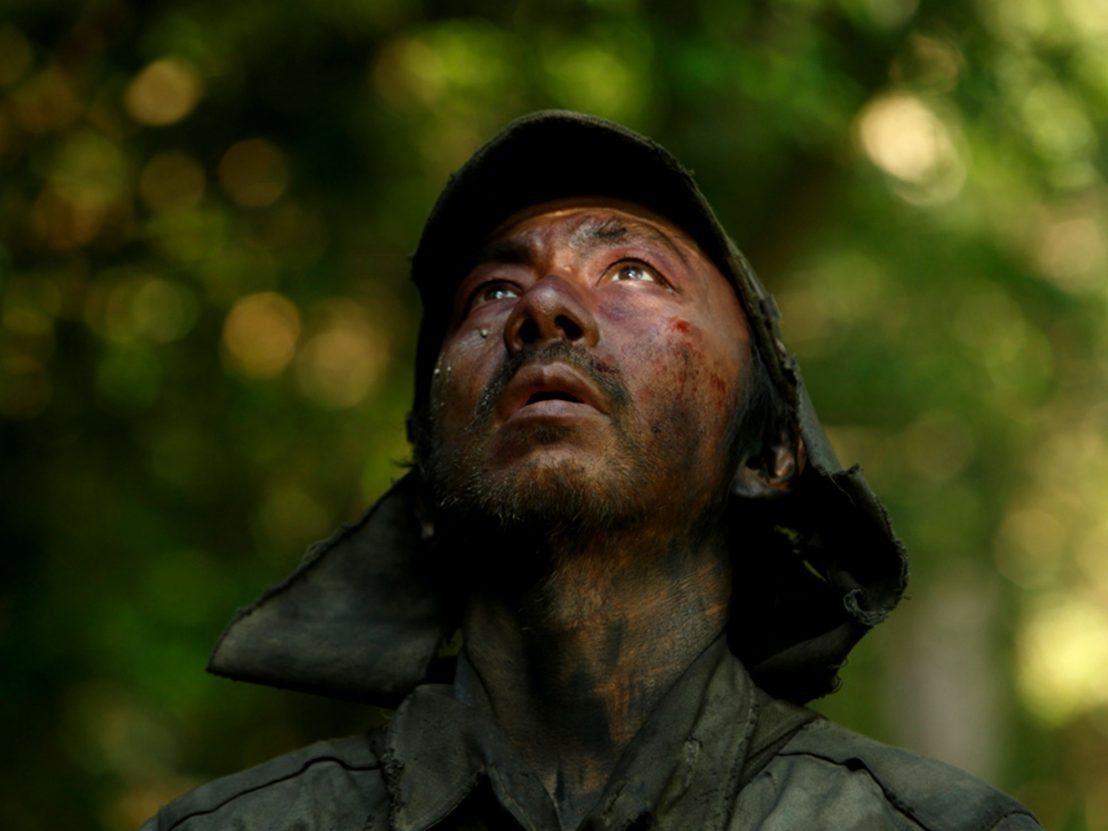 In Elem Klimov’s extraordinary anti-war film Come and See, the toll of Nazi outrages in Byelorussia is reflected on young protagonist Florya’s face, shown often in harrowing close-up and seeming to age visibly and dramatically in the small span of time during which the film is set, so that by the end all his youthful innocence has been replaced with wizened catatonia.

There is no such progression in Fires on the Plain (aka Nobi), a film set near the end of the same conflict but on the other side of the world, as retreating Japanese infantrymen face starvation, disease and defeat on the Philippine island of Leyte. For although it begins and ends with a close-up of the accidental protagonist Private Tamura (played by director Shinya Tsukamoto), from the very outset he looks like little more than a zombie.

“You have TB and you can’t even forage for food,” his commander declares contemptuously in the film’s opening words, before sending the private off to the nearby hospital with three yams intended to serve as five days’ rations. Tamura is a dead man walking, or slowly shuffling, his doom seemingly already sealed – and his slow round journey from base to makeshift hospital and back to base and back to hospital again, gruffly spurned by all he encounters, is like a circular tour of hell. “I don’t know which is better,” comments one of the comrades whom Tamura leaves behind to dig a trench, “to go or to stay.”

These words capture the impossible dilemma facing all these men, where any effort they make seems to bring them closer to death, whether from exhaustion, enemy fire, lack of food, suicide or even cannibalistic marauding by their fellow soldiers. After the hospital is bombed, Tamura eventually join a loose-knit exodus of men headed to Palompon, from where they have been told they will be evacuated – but along the way he must contend not only with threats from invading Americans, vengeful locals and maddened Japanese, but also with his own nightmarish traumas.

Based on the 1951 novel by Shohei Ooka (himself a survivor of conscripted service in the Philippines) which also inspired Kon Ichikawa’s 1959 film of the same name, Tsukamoto’s Fire on the Plains confronts us, from beginning to end, with reminders of the futility and madness of war. Like the passage from the Book of Revelations which gave Klimov’s film its title, Tsukamoto invites the viewer to ‘come and see’ the infernal ruin of the Apocalypse in the form of military experience.

Even its final sequence, so very different from the ending of Ichikawa’s film, shows a man who, having survived and returned to his wife and to his writing and to a life where regular meals are served in a bowl, still has the vivid memories of war etched on his face (again seen in close-up). From beginning to end, Tsukamoto confronts us with the horrors of war while refusing to countenance any notion of heroics – and the results, though not at all as pretty as the jungle landscapes, are unflinching, devastating and hard to forget.

Fires on the Plain is available now as a Dual Format Blu-ray/DVD courtesy of Third Window Films.