It’s been two years since the stop-motion masterminds over at Aardman Animations released their last feature, the Shaun the Sheep Movie, and we’ve been pining for more of their clever clay-based adventures ever since.

Luckily, they’ve just dropped a teaser for their next project, Early Man, which drags us back to the “dawn of time”, when Neanderthals wandered the earth alongside a host of prehistoric creatures.

The trailer shows Dug (Eddie Redmayne) and his trusty tusked sidekick Hognob on a hunting trip, ruthlessly pursuing their prey – a rabbit – as a suspenseful score drums up the tension.

In a trademark Aardman twist, their target bares its fangs and turns to chase the cavefolk instead. Considering the plot of 2005’s The Curse of the Were-Rabbit, we’re beginning to wonder whether director Nick Park has some unresolved bunny issues.

Redmayne and Hiddleston are joined by a tribe of top names, with Timothy Spall, Maisie Williams and Richard Ayoade all sharpening their spears.

Early Man looks set to have all the well-crafted design details and comic touches that we’ve come to expect from the studio. We still have a while to wait yet, though – it isn’t released until 2018 AD. 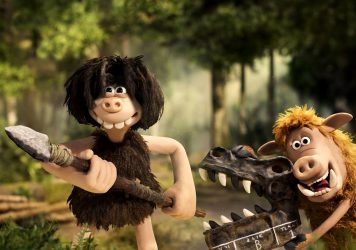 The Game of Thrones star will voice a character in Nick Park’s upcoming claymation caper.