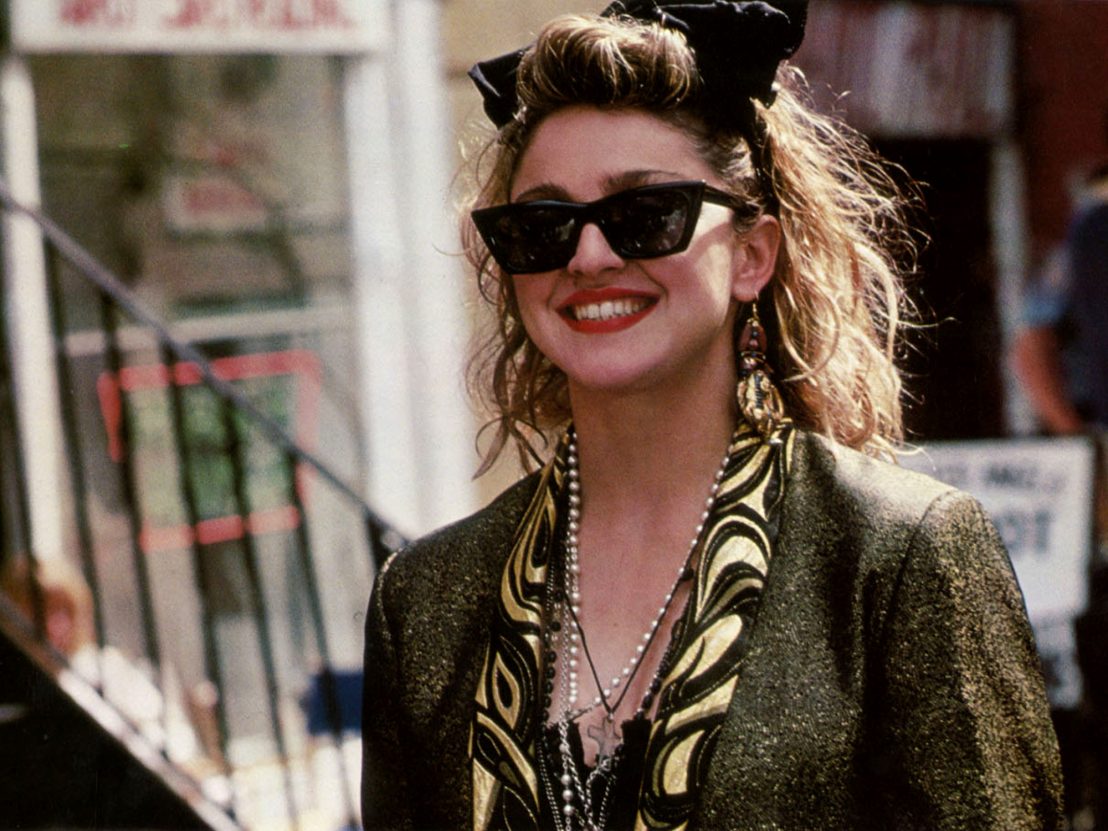 Director Susan Seidelman’s second feature, Desperately Seeking Susan, had various big names attached to it in preproduction. At one point Diane Keaton and Goldie Hawn were in talks for the lead roles. Melanie Griffith, Jennifer Jason Leigh and singer Susanne Vega were also considered for the role of Susan, before the part eventually went to the biggest female pop star on the planet, Madonna, with Rosanna Arquette chasing her coat tails as Roberta.

As with Seidelman’s debut feature, Smithereens, Desperately Seeking Susan focuses on a female protagonist living in New York City. Applying spit and polish to her gritty aesthetic and adding some star quality to the mix, the director was able to confidently shift from a work that sat comfortably alongside Jim Jarmusch’s early films to create something more mainstream and digestible while successfully capturing the zeitgeist of the early ’80s. This is the story of two women whose worlds collide amid marriage trouble, memory loss and a pair of valuable missing earrings. At the time many critics labelled the film a ‘screwball comedy’, but beneath its surface there are further dimensions to explore.

As the title suggests, Susan is both needed and wanted, whereas Roberta is locked into a stagnant marriage. Her personal desperation is evident in the opening sequence, where she sits in a salon surrounded by a gaggle of housewives. Roberta’s eager rediscovery of Susan in the classifieds gives her a glimpse of a life beyond the constraints of traditional wedlock. Later, when celebrating her husband’s career successes at a house party, Roberta catches her pathetic reflection and is met by the image of a mundane, trapped Fort Lee housewife. But then, as New York City glistens in the distance, she experiences a premonition of a new life, and her reflection becomes an alternate identity, one void of the restrictions of marriage. After the party she sits alone in the kitchen watching Alfred Hitchcock’s Rebecca, and recognises herself in the fatal tale of a wife unable to live up to her husband’s expectations. 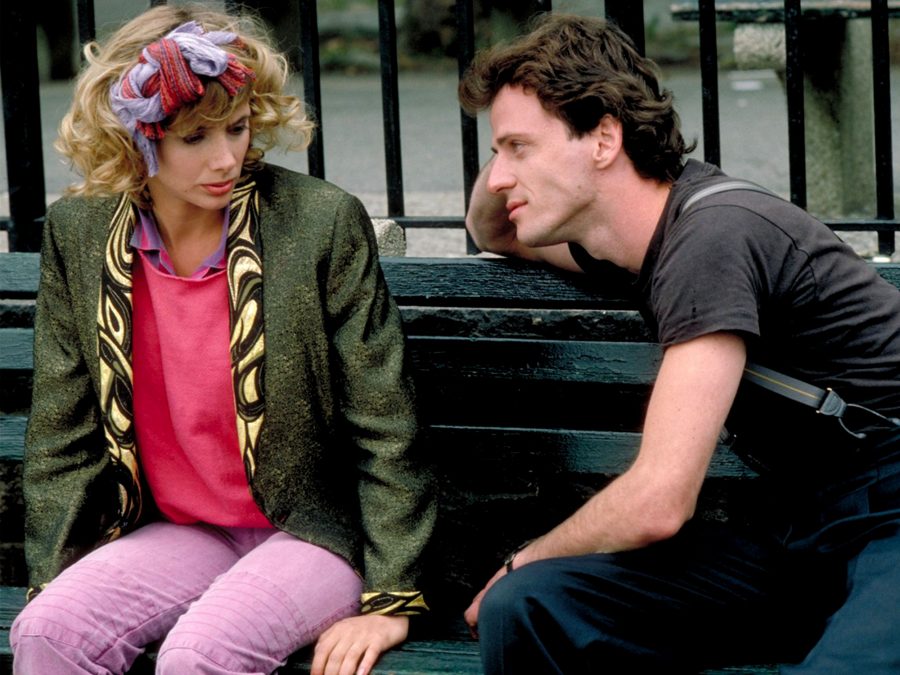 Madonna was a huge star in 1985, and the role she plays in Desperately Seeking Susan is not too far removed from the persona she adopted throughout the decade. It is likely that a large portion of the audience were Madonna fans and Roberta, like them, is kept at arms length, first glimpsing Susan through a coin operated telescope before candidly stalking her across the city. This is where Roberta’s character becomes relatable as her position mirrors that of a mildly obsessive fan. Roberta then proceeds to mimic her idol, until her amnesia enables her to become Susan completely.

Susan is a strong, sexual and self-confident woman. We are introduced to her as she rolls around on a hotel bed taking pictures of herself with a polaroid camera. She tucks a selfie into her jacket pocket, before pinching some valuable earrings and taking off in her hat and sunglasses, as though the paparazzi waiting for her outside. She steps off the bus as if she expects to be mobbed by a screaming crowd, and while treating the public toilets as her personal dressing room, manoeuvres herself with the self assurance of a woman who wants for nothing.

However, we soon find out that Susan doesn’t even have a bed to sleep in. Later, upon discovering that the vanity case containing her only belongings has been stolen, she shows no sign of being a broken woman; the same can be said when she finds out that her former lover has been murdered. Her formidable bravado adds to her appeal and fuels Roberta’s obsession. Such a character could simply not exist in the age of social media. Susan is independent and self-sufficient to the extent that although she has a boyfriend, she shows no real commitment to him. She is fully in control of her life, going where she wants, when she wants, taking what she wants (earrings, newspapers, cigarettes, clothes and cab rides) and answering to no one. 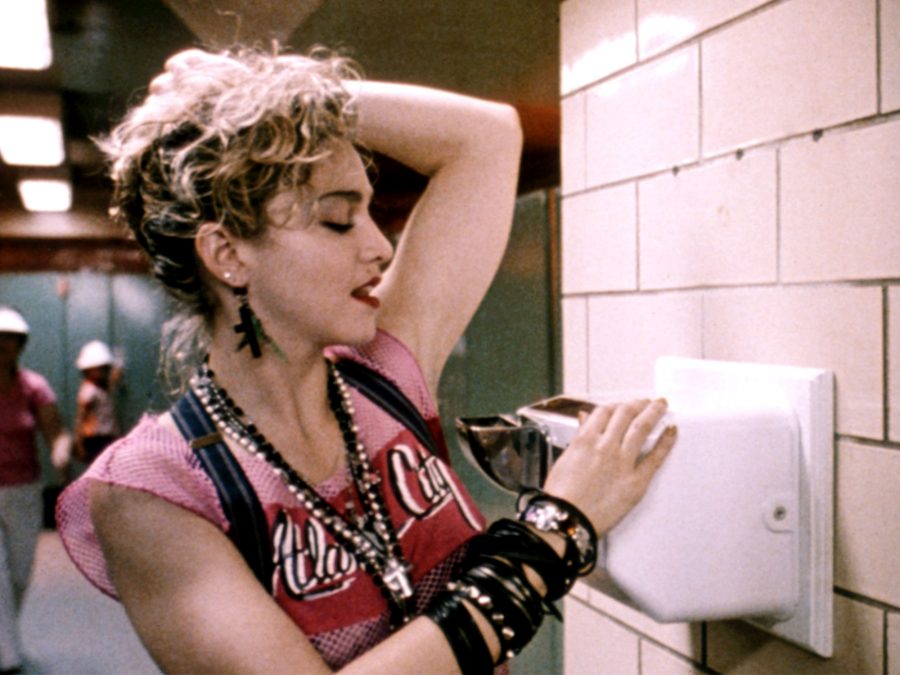 Seidelman has spoken about the influence of Jaques Rivette’s Celine and Julie Go Boating on Desperately Seeking Susan, which she also noticed in Leora Barish’s screenplay. The pair pay homage to Rivette throughout the film, most notably with the identity switch, the Magic Club and in the sequence where Roberta initially follows Susan in the same quasi farcical way that Julie (Dominique Labourier) trails Celine (Juliet Berto).

In the original ending (which can be found on certain DVD versions of the film), Roberta and Susan are seen riding a pair of camels across a barren desert, which only really makes sense with Celine and Julie in mind. Out of context this final shot makes little sense, yet in light of Rivette’s influence it is somewhat justified when you consider the significance of the pyramid embroidered on Susan’s jacket – crucially worn in the scene not by Susan but Roberta. The pyramid is Desperately Seeking Susan’s figurative White Rabbit and with Susan now following, it appears the pair have switched roles and are delving deeper into their own rabbit-hole.

Following poor audience test screenings, the camels were left on the cutting room floor. The final version of the final ends in a cinema where Susan and Jim (Robert Joy) watch Ib Melichor’s The Time Travellers, in which the characters travel through time and incidentally create multiple selves. The rabbit-hole theory is again subtly alluded to as the film on the cinema screen burns out, creating its very own visual portal, perhaps inviting us to look further into the film, or, as Susan finally demonstrates, to just sit back, put your feet up and enjoy it.