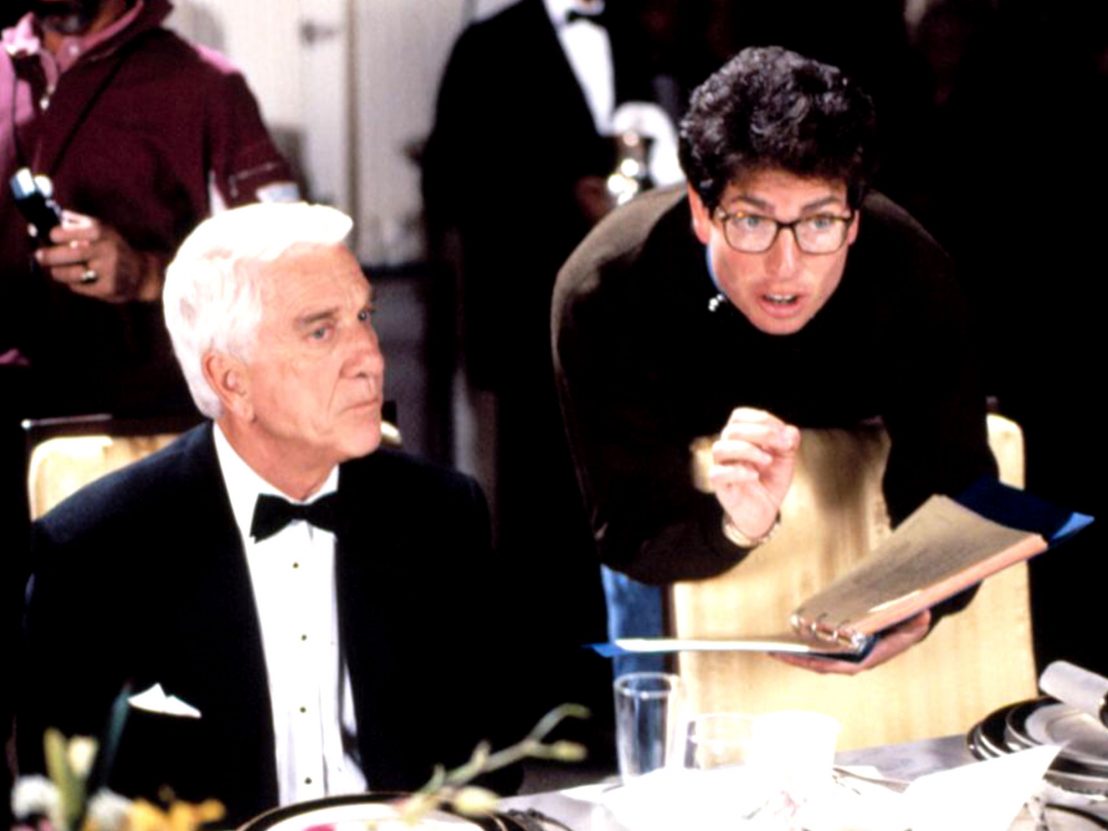 The writer/director reflects on the origins and legacy of his most beloved comic creation.

“When I see it again, I still laugh,” admits director David Zucker, reflecting on the legacy of his 1988 crime comedy The Naked Gun. The filmmaking team known as ZAZ – comprised of Zucker, his brother Jerry and frequent collaborator Jim Abrahams – first introduced the world to the comedy genius of Leslie Nielsen in 1980’s laugh-a-minute disaster flick spoof Airplane!. However, it wasn’t until the Forbidden Planet star stepped into the squeaky gum-shoes of Lt Frank Drebin and thwarted a plot to assassinate the Queen that Neilsen’s true comedic potential was realised. As The Naked Gun turns 30, Zucker reflects on his first solo directing gig and how he birthed one of the most quotable comedies of all time.

“We tried writing The Naked Gun as a movie but had trouble figuring out how to do it in three acts,” recalls Zucker. “Michael Eisner, then at Paramount, said he could get us on ABC and suddenly we were doing it as a series – but it was a lot of material to pour into a television series. I always thought our kind of humour works better on a big screen where people really have to pay attention.” Written and directed by ZAZ, 1982’s Police Squad enlisted Nielsen for six episodes but was ultimately axed by ABC later that year. “The president of ABC at the time said to a press conference of news outlets disappointed about Police Squad’s cancellation that the show didn’t work because you had to watch it,” laughs Zucker. “In those days, they didn’t really give things enough time to find an audience.”

Undeterred, ZAZ poured their collective energy into 1984’s Top Secret! and 1986’s Ruthless People – yet there was still unfinished business as far as Frank Drebin was concerned. “We really wanted to do Police Squad as a feature,” Zucker says, “and it was an easy pitch because by that time Frank Mancuso Jr was the head of Paramount and essentially, he just said yes. He didn’t say you’re out of your mind or ask how we intended to take a failed TV series and convert it into a movie.” With the go-ahead secured, work on Drebin’s first big-screen outing began – but not before a quick title change. “By then, Police Academy had been released which was created by Pat Proft, our Police Squad writing partner,” remembers Zucker. “The Paramount marketing department gave us a list of about 50 titles to choose from and The Naked Gun stuck out as something which appealed because it promised a lot more than it could ever deliver.”

Next stop: the cast. Priscilla Presley joined as Drebin’s on-off love interest, Jane; OJ Simpson was recruited as wrongly accused clutz Officer Nordberg; and Zucker even managed to secure Oscar winning actor George Kennedy as Drebin’s boss Ed Hocken. And contrary to what you might have heard, studio insistence had nothing to do with it. “There’s no truth to that,” confirms Zucker. “We wanted George for Airplane! and Universal wouldn’t give him to us because he was in all those airport movies so we jumped at the chance to cast him in The Naked Gun. We thought OJ would be good to round-out the cast,” he adds. “He was a celebrity, a sports hero – not a great actor but he did improve with every movie.”

And then there was Leslie. “At the time Leslie said he was a closet comedian and was itching to do comedy. We didn’t know that but he was so serious and good at what he did that we thought he was perfect.” In fact, Nelsen’s lengthy career in drama only added to his comedy chops. As Zucker points out: “Not only were we doing a failed television series and converting it into a feature but Leslie had a long history of doing serious movies. He was part of a greater ensemble in Airplane! but made his mark and had some of the best lines. He delivered them so straight and that was the style we were going for: to not have a comedian deliver them. He was a natural choice for Frank Drebin.” 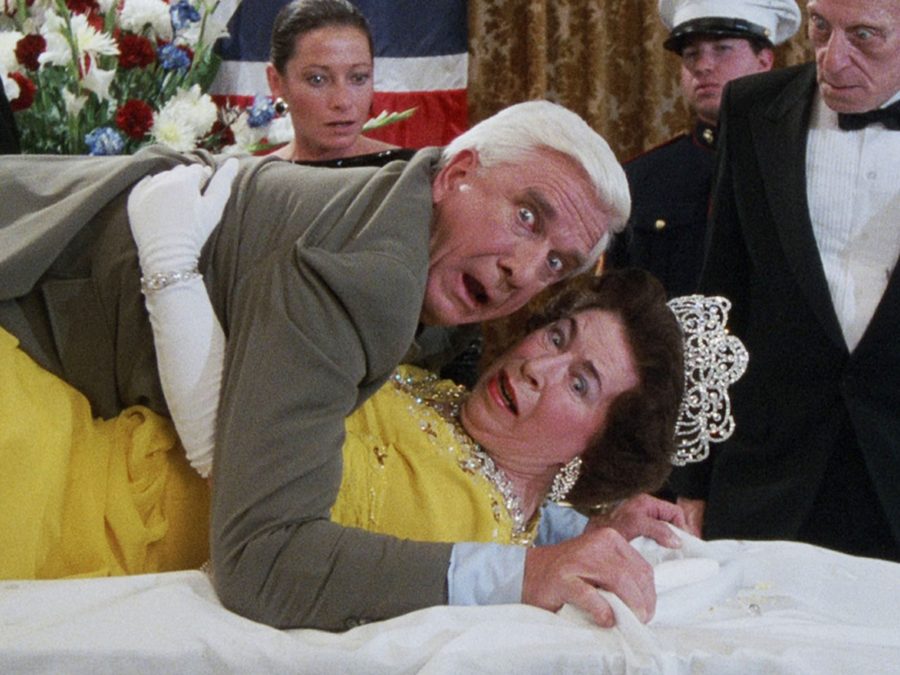 Despite being known as an on-set prankster, Nielsen was a true professional when cameras rolled. “He had a great sense of humour but he didn’t write his own lines,” Zucker says. “There was no improvising on set. He knew where the joke was and knew better than to mess with the style, try to wink or be funny. He absolutely trusted me and never tried to gild the lily. We purposely used straight actors in all roles and the humour came from behind the camera. Jerry, Jim and I would fight over every word and if you look at the speeches in the script, there’s nothing over six lines. There’s a certain rhythm to them. When Leslie died, they quoted dozens and dozens of great lines and they were all written by Pat Proft.”

Unlike many ZAZ-inspired spoofs, The Naked Gun made a point of choosing genre over specific titles as its main source of fodder, a technique which slowed its ageing process. “The genre was police movies and melodramas,” recalls Zucker. “Police Squad was based on a 1958 series called M Squad. We also tried to make jokes plot points and plot point jokes. We didn’t like to pause to do plot, we always had to have a joke involved if we could. By the time we got to The Naked Gun, we broadened it to include the Dirty Harry movies. Leslie’s character was a combination of Lee Marvin and Clint Eastwood. I later met Clint at a function and asked him if he knew that Lt Drebin was based on Dirty Harry. He didn’t really care – he just smiled and nodded.”

The Naked Gun’s deadpan humour was so infectious it even bled into its soundtrack and end credits, as Zucker explains: “Elmer Bernstein was the composer of the film’s theme and he’d done classics like The Magnificent Seven. We showed him the movie and he thought it was hysterical so we asked him to write a B-movie theme. Fortunately he didn’t take that as an insult and proceeded to write this great, overly serious B-movie score. We continued the jokes into the credits which were always taken seriously. We couldn’t wait to explode those cliches and other movies have since copied.”

Zucker believes that the experience of bringing The Naked Gun to audiences was not only a necessary career step but something that paved the way for future ZAZ features. “We use The Naked Gun as a rulebook. In all the movies I’ve done since we ask, ‘What’s the driving instructor?’ For example, we do a typical car chase in The Naked Gun and when Leslie jumps into a car, it’s a driving school car – that’s what made it funny. Do that and the jokes write themselves. The Naked Gun was the first film I did on my own and that was really significant for me because I had to get my sea legs. It was an experience I had to go through.” 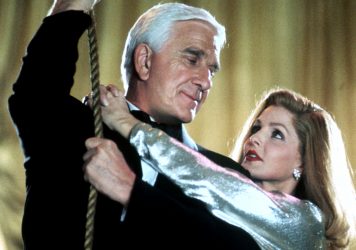 David Zucker confirms a Naked Gun reboot is in the works

The director teases a new addition to the series, which will follow the exploits of Frank Drebin Jr.