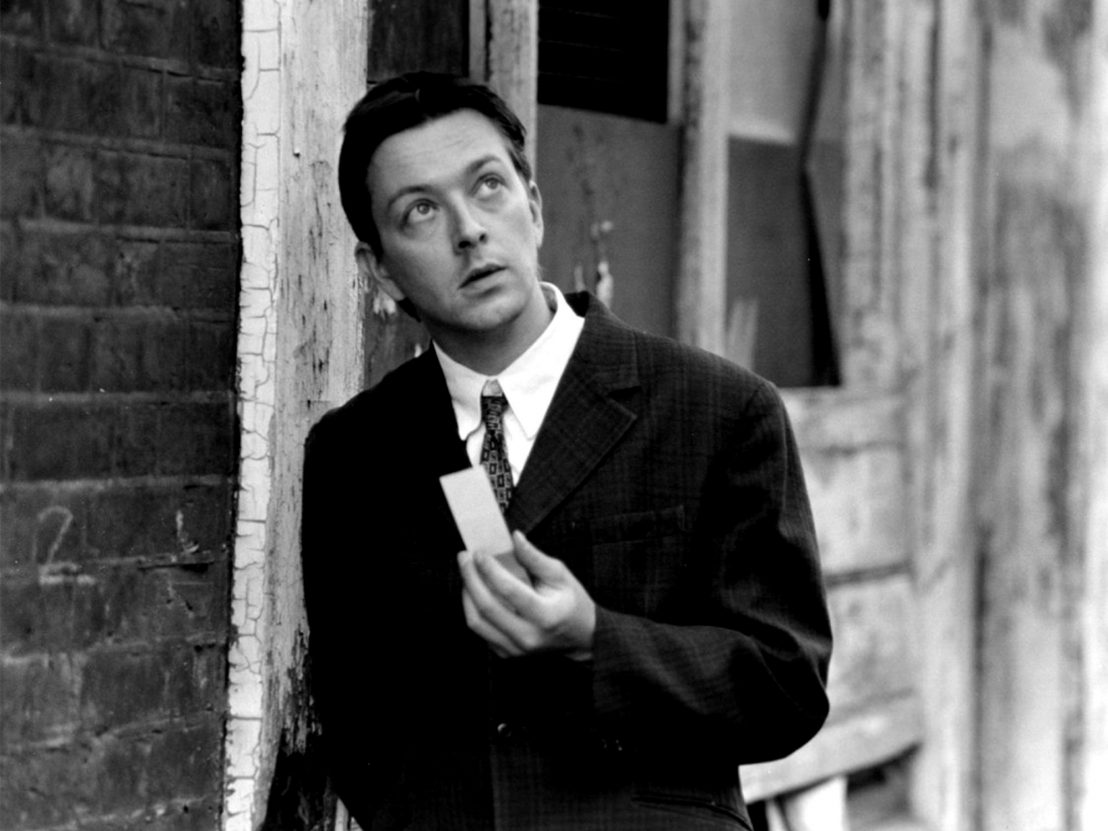 “Everyone has a box,” lectures Alex Haw’s Cobb while mentoring The Young Man (Jeremy Theobald) on how people are inclined to keep possessions that represent them most truthfully as an individual. In a similar sentiment, Nolan’s directorial “box” includes several notable features that define his style – all of which are on grand display in this neo-noir chef-d’euvre.

Following sees The Young Man pick people out of a crowd and study them as a form of creative voyeurism. This pushes him into the smarmy hands of Cobb who has a similar obsession with anonymous members of the public, only his infatuation manifests itself in low-level sociopathic burglary. It’s no surprise, then, that the film frequently draws attention to specific objects, as is typical of Nolan’s style – whether it be the missing earring or stolen credit card.

These items all play a subtle part in the conclusive double-twist and are made to feel significant through inserts, whereby the shot is a close-up drastically different to the master shot. Nolan uses this technique excellently in Following and indeed in the rest of his canon, think of the rubber ball in The Prestige or Inception’s iconic totems.

By including these significant objects, Nolan allows his characteristically non-linear narrative to switch from time periods flippantly, whilst keeping the order of events relatively clear in the audience’s mind. For example, the varying placements of The Blonde’s (Lucy Russell) earring indicates the stage of the story and slowly unravels The Young Man’s turbulent journey. Now synonymous with the director’s style, this early attempt at a jumping chronology is executed precisely despite budgetary restrictions (a mere $6000).

We flash forward to our protagonist being interrogated in the early stages of the film, which is where the narrative eventually ends up via a series of tension-building burglaries, fights, and double-crossings. In a 2014 Vice interview Nolan spoke of the “heightened naturalism” that exists in Following, which is achieved by the genre-specific noir style, set against the backdrop of a familiar London setting. This creates an intense atmosphere with a relatable yet melodramatic string of events which are typical of noir and also have a taut documentary feel, courtesy of the low-budget handheld cameras used to film almost all of the scenes.

The frenetic energy that anchors the film is also achieved by cross-cutting several scenes together, a technique perhaps most famously used by Nolan in the falling minibus scene in Inception. However, it is also deployed to great effect in Following without the technology available. He seamlessly merges events from different stages of the narrative to show the interconnectedness of the characters’ actions. Possessions are knocked over or moved only to be picked up by other characters, or to appear unmoved in other scenes to reinforce the muddy timeline. This is often incriminating, with a miniature wooden mannequin being key when understanding the order in which The Young Man’s dingy apartment is entered.

The score is also quintessentially Nolan and adds to the fast-paced action of the film, with long-time collaborator David Julyan (who worked on Memento, Insomnia and The Prestige) using a scintillating mix of harsh reverbs and gentle piano. Cobb himself plays the ivories with gloved hands, which feature ubiquitously throughout. The film opens with its most iconic shot of hands fondling through a box of possessions – an image Nolan frequently uses to introduce his characters, be it the bird-cradling fingers of Michael Caine in The Prestige or Leonardo DiCaprio’s safe-cracking mitts in Inception.

The intricate plotting is standard Nolan and despite some wobbly acting in parts of the film, his script reigns supreme with an enticing mentor dynamic, a smattering of romance, and a compelling, rule-breaking protagonist. Nolan often has his characters lay out rules for themselves only for them to be broken later – in this instance The Young Man’s story gains momentum when he breaks his cardinal rule: don’t follow the same person twice. It’s testament to Christopher Nolan’s genius that his directorial hand is so visible, regardless of the financial and technological constraints he was working under, throughout this masterful monochrome thriller.