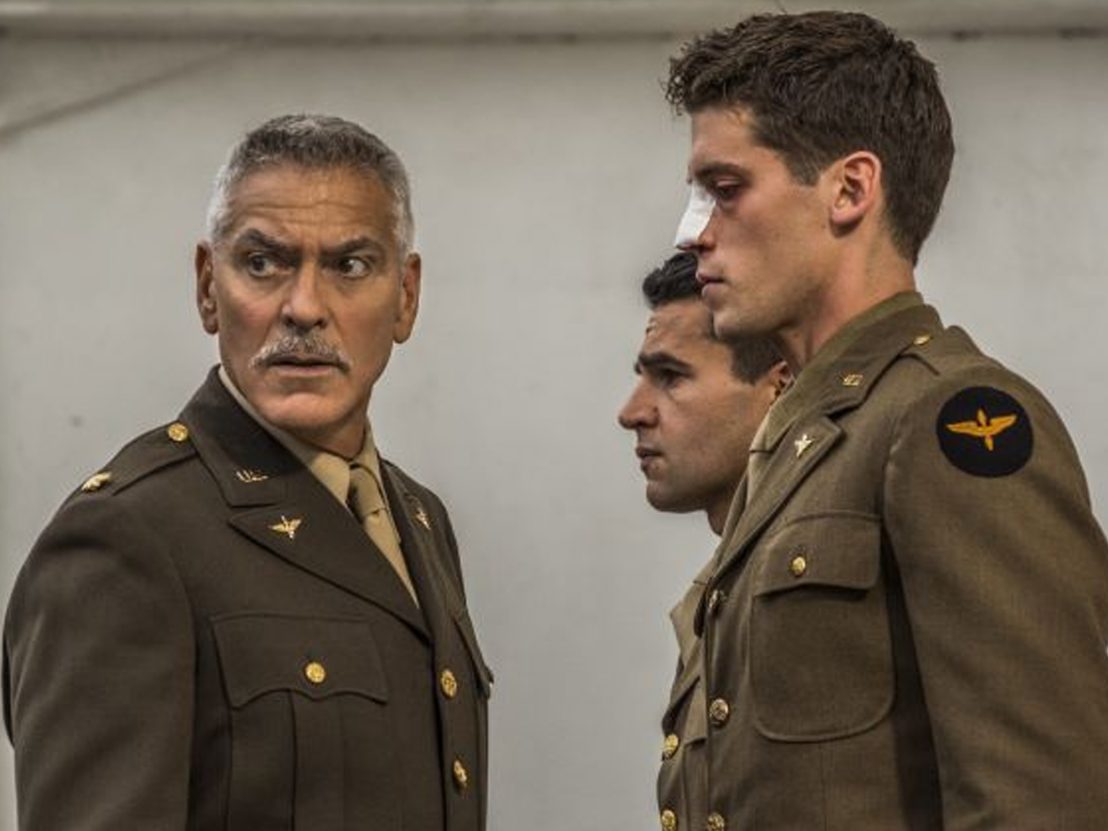 This year sees the hotly-anticipated return of Game of Thrones and Stranger Things, but there’s sure to be a lot of excellent new television to sink your teeth into as well. Here are 20 upcoming shows that have piqued our interest – let us know what you’re looking forward to @LWLies. 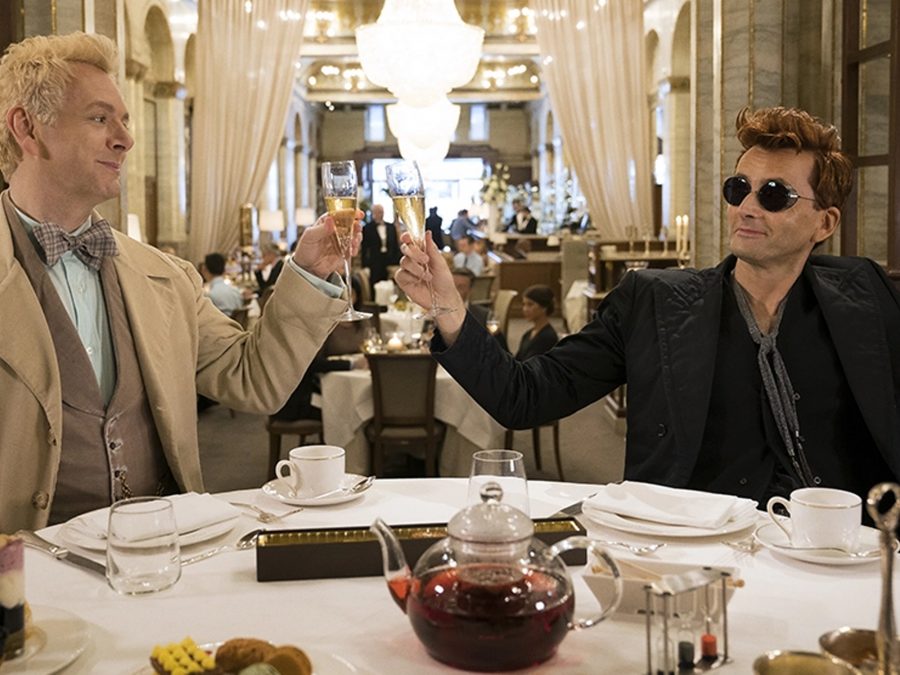 Adapted from the novel written by Terry Pratchett and Neil Gaiman, Good Omens is the story of how two old friends – an angel and a demon – attempt to avert the apocalypse. It’s been in development hell for years, but finally has a home thanks to the BBC and Amazon, and an all-star cast to match. David Tennant and Michael Sheen play Crowley and Aziraphale, the demon and angel at the centre of it all, with Anna Maxwell Martin, Jon Hamm, Nick Offerman, Frances McDormand and Miranda Richardson also joining them. Gaiman himself has written the script for this six-part series, so we’re expecting big things.

Based on the successful Israeli drama of the same name, Euphoria follows a group of high school students as they navigate sex, drugs, identity, and the many other facets of being a teenager in the modern world. That might not sound like much, but it’s a HBO and A24 production starring Zendaya, Storm Reid and Maude Apatow, so don’t write it off just yet… 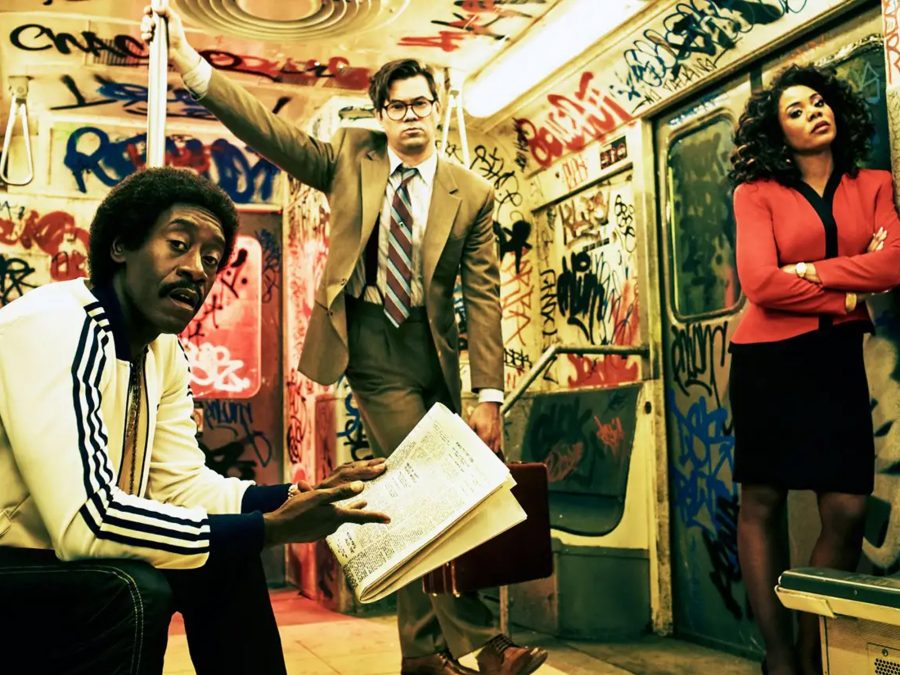 Don Cheadle, Andrew Rannells and Regina Hall star as a band of outsiders who inadvertently cause havoc on Wall Street in this 80s dark comedy about the years leading up to the 1987 stock market crash. Creator David Caspe is best known for helming sitcom Happy Endings and writing the Sandler-Samberg vehicle That’s My Boy, but hey – Don Cheadle!

Richard Gere stars in his first major television role as Max, a media tycoon, joined by Helen McCrory as his estranged wife Kathryn in this new drama, written by Tom Rob Smith, who co-wrote the acclaimed FX series The Assassination of Gianni Versace. Billy Howle stars as their son, who is a threat to his father’s empire, with Ciaran Hinds and Sarah Lancaster also slated to appear.

Bob Fosse is a musical theatre (and musical film) legend, so it’s nice he’s finally getting a television tribute – but what’s most exciting about this miniseries, centred on the romance between Fosse and Broadway dancer Gwen Verdon, is the casting. Sam Rockwell seems like the perfect choice to play Fosse, while Michelle Williams stars opposite as Verdon. We’re highly anticipating the dance sequences. 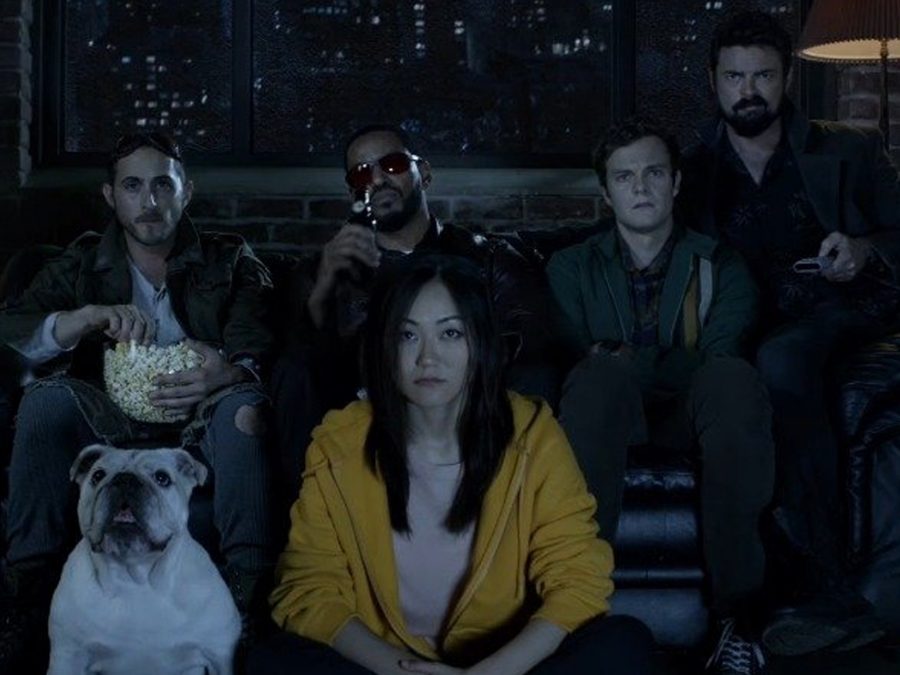 You might be sick of superhero content by now, but on the off chance you’re still on board, this Seth Rogen and Evan Goldberg-produced adaption of Garth Ennis and Darick Robertson’s dark comic book of the same name might be worth a look. Starring Karl Urban and Elizabeth Schue, it’s set in a world where superheroes embrace the darker side of their celebrity and fame. The titular Boys are a team tasked with taking down corrupt superheroes, and given how obscene the comic book is, it’ll be interesting to see the on-screen version.

If you were glued to your Netflix account binge-watching The End of the F***ing World earlier this year, you’ll be pleased to know that a new series from creator Charlie Covell is on the way. Kaos is a dark, comic modern reimagining of Greek mythology.

2019 is shaping up to be a big year for Jordan Peele. While his second directorial project Us will hit cinemas, on the small screen he’s behind the reboot of iconic sci-fi series The Twilight Zone. The anthology series has an all-star cast, but we already know Adam Scott will star in a remake of Nightmare at 30,000 Feet, the iconic episode which saw William Shatner wrestling with an airborne gremlin only he could see (later parodied on The Simpsons, of course). 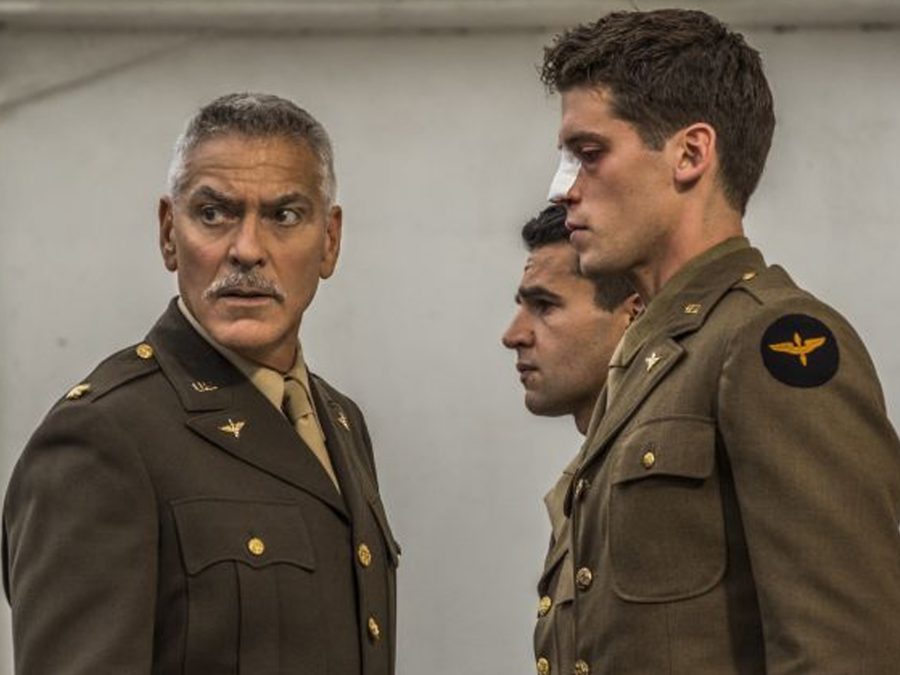 George Clooney directs and stars in this six-part adaptation of Joseph Heller’s blistering satire of the same name. Given how dire Clooney’s last directorial effort was, perhaps a little apprehension is fair, but he’s always been quite competent when handling history (see Good Night, and Good Luck) so this will still be worth checking out. Christopher Abbot stars as US Air Force bombardier Yossarian, with Kyle Chandler, Hugh Laurie and Giancarlo Giannini also on the roster.

A prequel to the Jim Henson’s 1982 cult classic, this Netflix series will explore the world of Thra, following three Gelflings – Rian, Brea and Deet – as they attempt to start a rebellion which could save their world. Of course the main selling point of this series will be whatever incredible puppets are cooked up by the Henson Creature Workshop, but the voice cast is pretty phenomenal: Taron Egerton, Anya Taylor-Joy, Helena Bonham Carter, Harrison Dickinson, Mark Hamill, Jason Isaacs, Andy Samberg, Simon Pegg, Mark Strong and Alicia Vikander are all on the call sheet.

Too Old to Die Young (Amazon)

Another good get for Amazon, this is Nicolas Winding-Refn’s pet project, starring Miles Teller, Jena Malone, John Hawkes and, uh, Billy Baldwin. Refn has kept schtum on key details so far, but we know it’s set in Los Angeles and follows a grieving police officer who finds himself embroiled in an underground world occupied by hitmen, Yakuza soldiers, cartel assassins, and “gangs of teen killers”. Sign us the hell up.

Russell T Davies is back with a new series, but this time he’s brought Emma Thompson with him. She stars at Vivienne Rook, an outspoken celebrity turned controversial political figure, in this family drama.

David Attenborough fans will get their fix from Netflix this year – Our Planet is a new documentary series filmed over the past four years in 50 different countries. Attenborough narrates, and it’s from the team behind Blue Planet and Planet Earth, so expect visual excellence too. 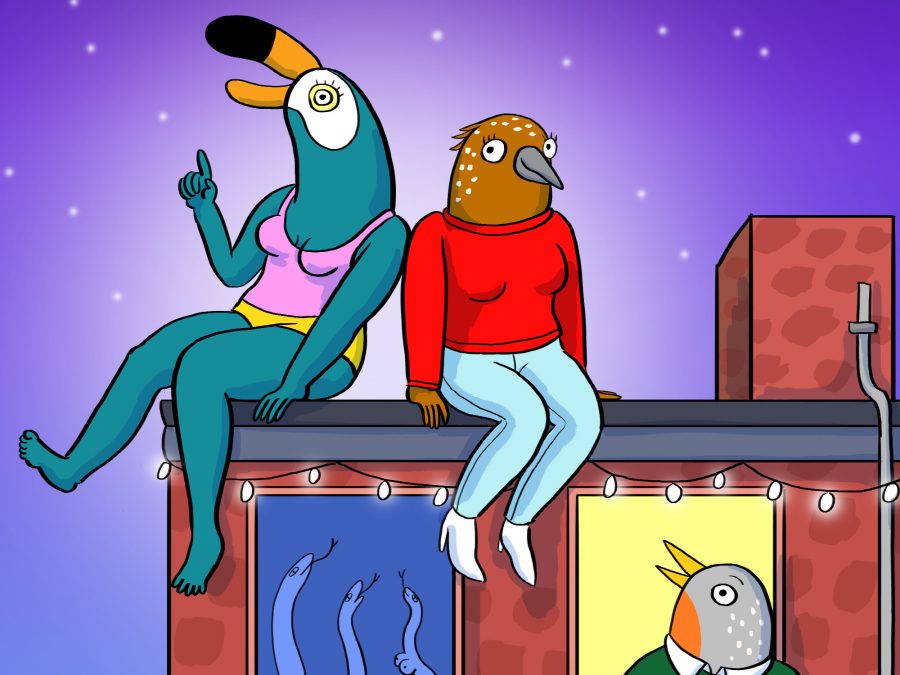 If you love BoJack Horseman, prepare to make room in your schedule for another anthropomorphic animal animation. Tuca & Bertie stars Tiffany Haddish and Ali Wong as two thirtysomething birds who live in the same apartment building, and it’s created by Lisa Hanawalt, who worked on BoJack. The dream team of Haddish and Wong along is enough to ensure our viewership.

This miniseries examining the 1986 nuclear accident at Chernobyl power plant is sure to be a harrowing watch, but will shed light on the man-made disaster which still affects Ukraine today. Emily Watson, Stellan Skarsgård and Jared Harris star.

Damien Chazelle’s back with another musical – sort of, anyway. Taking place in Paris, The Eddy centres on a jazz club threatened with closure. It’s scripted by British screenwriter Jack Thorne, who started out on Shameless and Skins before gaining critical acclaim for This is England ’90 and National Treature (the Robbie Coltrane miniseries, not the Nicolas Cage film). American music legend Glen Ballard (who co-wrote and produced Alanis Morissette’s ‘Jagged Little Pill’) has written the music, but there’s no word on casting yet.

What We Do in the Shadows (FX)

Following the same premise as the 2014 film, this mockumentary follows three vampires who are roommates – and have been for hundreds of years. Although Jermaine Clement and Taika Waititi executive produced, they won’t be starring; this time the action’s in New York City, with Matt Berry, Kayvan Novak and Natasia Demetriou leading the cast.

Can you believe Zak Snyder’s much-maligned adaptation of Alan Moore’s celebrated graphic novel happened ten years ago? Seems like a good time for a do-over – courtesy of The Leftovers creator and Lost co-creator Damon Lindelof. Regina King, Don Johnson, Tim Blake Nelson and Jeremy Irons star – which is a predictably stellar line-up for this HBO series.

Ava DuVernay’s latest project follows the true story of a horrific attack on a woman in Central Park in 1989, and the media frenzy that ensued. Five young black men were wrongfully convicted as the perpetrators, and it took 25 years to clear their names. There’s a good cast too, including Michael K Williams, John Leguizamo, and Vera Farmiga. 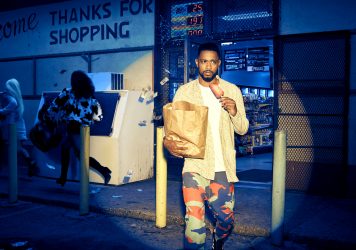 From Atlanta to The Deuce and Doctor Who to Derry Girls, here are our small-screen highlights from this year. 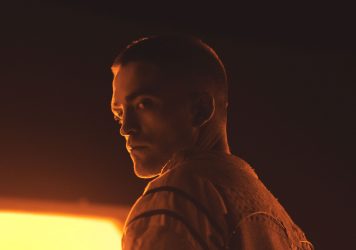