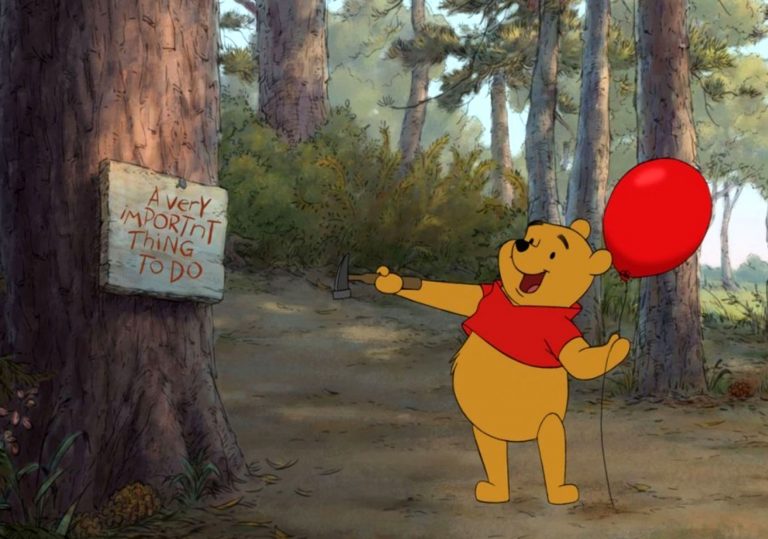 A new Winnie the Pooh cartoon! Hope it’s not too new-fangled.

Honey and spice and all things nice.

Pooh’s return will no doubt charm both older and younger audiences.

After 85 years you’ll be pleased to see that very little has changed in dear old Pooh.

Disney’s Winnie the Pooh follows the bear who’s always got his mind on his honey and his honey on his mind back into the Hundred Acre Wood; introducing him to a whole new generation of kids. Because, unlike most children’s films of the post-Shrek movement, this story really is one tailored for a bumper-seat audience.

Weaving seven classic AA Milne stories into one feature-length yarn, the film pivots around Eeyore’s missing tail. With a pot of honey as the reward for the best make-shift replacement, Pooh and friends try everything – from an umbrella to a cuckoo clock – to pin the tail back on the donkey. Meanwhile, the not-so-wise Owl misreads a misspelt ‘back soon’ message left by Christopher Robin, sending the gang on a wild-goose chase for a creature called a ‘Backson’.

Staying faithful to EH Shepherd’s original watercolour drawings, directors Stephen Anderson and Don Hall have reanimated Pooh with a bit more gloss, but not too much glitter. From Rabbit’s carrot patch to the ubiquitous floating red balloon, the film is sure to evoke a sense of nostalgia in bigger kids and adults too.

Even the more ‘modern’ sequences stay true to character; as in the cabaret song, ‘Everything is Honey’, we see Pooh dressed in a bee-striped swim suit and a boater hat and diving into a bottomless landscape of his favourite golden nectar.

Helped along by John Cleese as narrator, the whimsical – quintessentially British –film also allows its characters to interact with the story itself: getting tangled in its lines and bouncing off the punctuation marks on the page.

After all, after spending 85 years not growing up in the Hundred Acre Wood, it would be implausible to expect Pooh to be brought back to life anywhere other than from the heart of the storybook.

A new Winnie the Pooh cartoon! Hope it’s not too new-fangled.

Honey and spice and all things nice.

Pooh’s return will no doubt charm both older and younger audiences.