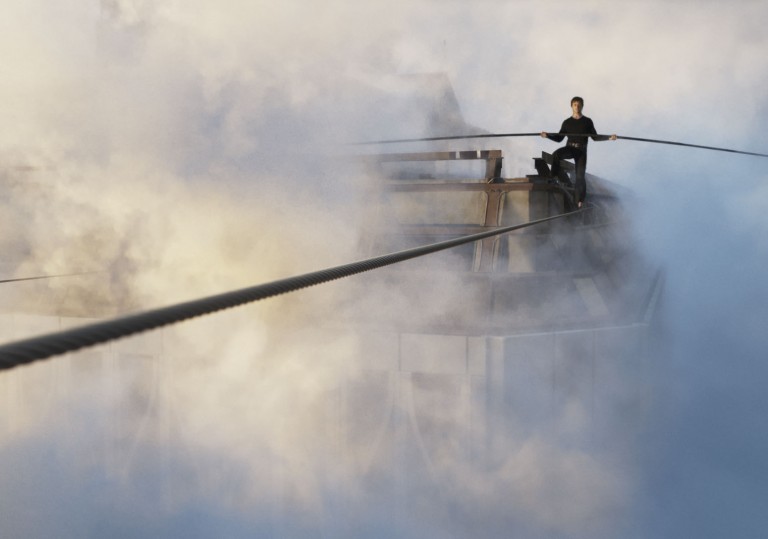 Is there really anything more to say after Man on Wire?

A random act of real-life intransigence rendered as a cartoon.

If you see it, best to see it big to appreciate the technical wizardry.

It’s in the interest of cinema that the wire walk undergone by French philosopher-acrobat Philippe Petit during the wee hours of 7 August, 1974, between the not-quite-completed twin towers of the World Trade Centre, is deemed a beautiful, intellectually-driven act of dizzy-headed public performance art and not one of unalloyed narcissism. We can never truly know the nature of Petit’s impetus, nor whether it can be reduced to such simplistic binary definitions. Yet those who have chosen to tell this story do have the habit of nudging the conversation towards quixotic profundity and away from something that we could never hope to understand. Or, at least, they don’t see the beauty inherent in uncertainty.

In James Marsh’s 2008 documentary, Man on Wire, which detailed the planning and execution of this sky-high “be-in”, the walk itself (depicted via photographic stills) was presented to the strains of Erik Satie’s ‘Gymnopédie No 1’ – a sterling post-production co-mingling of sound and visuals, but one which muddied the emotional resonance of the information on screen: were we weeping because of the man or the music?

Robert Zemeckis’ The Walk lays on the cartoon gloss like Vaseline before a marathon, transforming what some may have chalked up as one man fulfilling an incomprehensible life’s calling into a case of wishy-washy daredevilism, a disaster movie with little at stake. The film never questions why someone would do something like this, only why someone wouldn’t do something like this. In Zemeckis’ buttery paws, Petit becomes a stock action hero, a twinkle-toed dreamer who is powered by nuggets of old-timey wisdom (c/o Ben Kingsley in a pork-pie hat) and screwball serendipity that he acquires along the road to infamy. The moral ambivalence that is the trademark of someone such as Jean-Pierre Melville – cinema’s grand master of depicting the cold process of “crime” – is sorely lacking.

From the off, a tone of light comedy prevails, with Joseph Gordon-Levitt prancing around on the torch of the Statue of Liberty and teeing up his tall tale like a court jester above his station. There’s the feeling that Zemeckis is in constant doubt that his audience might dismiss this story as whimsical and inconsequential, and so his screenplay – co-written by Christopher Browne and based on Petit’s book, ‘To Reach The Clouds’ – employs a narration whose purpose appears to be to make sure that even a scintilla of ambiguity is neutralised on sight. Salient details are repeated on numerous occasions, and Petit says things like “we ran up the stairs” as characters are seen running up some stairs. The gang refers to the scheme as a “coup”, mentioning the term over and over during their planning procedure. Misty-eyed Zemeckis sees no irony in their romantic descriptors, instead taking them at face value as a way to make his film appear more radical than it is.

The most bemusing aspect of The Walk, however, is how disconcertingly artificial everything looks, feels and sounds. There are even a couple of direct references to the Clock Tower finale of Back to the Future, as fallen cables need to be hastily re-hoisted as the sun rises and deadlines loom. Perhaps there’s a convincing counter argument to made to this suggestion, but Petit’s story is only incredible because it was a real thing that happened. Yes, a human person actually carried out that wacky stunt. The manner in which this material is presented, like a prestige fantasy on an expansive IMAX canvas and always recognisable as a piece of immaculately-polished screen fiction, removes that thrilling, dangerous link to reality. Zemeckis is a fabulist, not a realist, and as we saw with a film like Flight, he’s far more comfortable inventing reality than he is authenticating it.

The documentary version of this story presented a real person, and perhaps its own “coup” was cultivating a sense of life-or-death danger even though we could plainly see that this guy lived to tell the tale. Through the mire saturated colours, novelty camera moves, the 3D-enhanced birds’-eye views, Alan Silvestri’s all-the-feels score and Levitt’s Peppy le Pew accent, actual human danger never enters in to the equation. It’s so cartoonish that, if in this version Petit did lose his cool and plummet those 110 floors, the ground would’ve likely been revealed as rubberised – like something out of Who Framed Roger Rabbit – and vaulted him straight back up there.

Zemeckis has spoken about the desire to show this act that no-one bar its key participants got to witness from close proximity. He even wants to attempt to emulate what it felt like for Petit to be out there on the wire. And yet in doing so, he makes it seem less miraculous, transforming it into a banal act, achievable by mortals. Even the spectacle itself has its edges dulled, as once it happens, it’s then replayed (to exponential levels of tedium) over and over.

One pleasing trace of subtlety, however, is the decision not to directly allude to the eventual fate of the towers. In training the focus on Petit and his quasi-erotic relationship to these two urban totems (he certainly seems to prefer them to love-interest Annie Allix, played by Charlotte Le Bon), Zemeckis celebrates what these buildings meant then as a way to talk about what they mean now. His film is about duality of function – how two office blocks which came to exist as a symbol of western corporate malaise can be recontextualised as a gigantic circus big top for an escapist dandy. And that’s something you can never destroy.

Is there really anything more to say after Man on Wire?

A random act of real-life intransigence rendered as a cartoon.

If you see it, best to see it big to appreciate the technical wizardry.