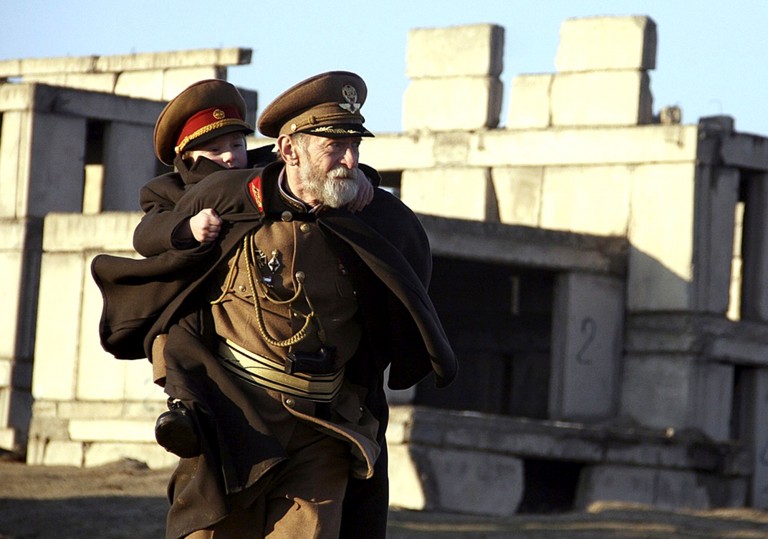 Lauded at its premiere at the 2014 Venice Film Festival.

Well made and thoughtful, while never demonstrating the director's unique touch.

Looks at the ugliness of the world, but attempts to ask why it's that way.

Mohsen Makhmalbaf explores life after revolution from the perspective of a dictator and his grandson.

Something a little unexpected from one of the key architects of the Iranian New Wave, Mohsen Makhmalbaf, especially considering his previous, ultra lo-fi film, The Gardener, involved him deep in philosophical discourse with a small boy while the pair played with some mirrors. In a garden.

The President casts aside the whimsical (albeit profound) poetics of classic titles such as A Moment of Innocence in favour of an allegory that’s far more caustic and defiantly outraged. It takes place in a grim, unnamed land, chronicling the swift deposition of a military dictator and his cute, ideologically brainwashed grandson, as they are forced to flee the confines of their plush palace and receive a first-hand view of the country they’ve decimated.

The film opens with the president demonstrating to his young charge the extent of his powers: they survey their land at night from a high vantage, and all it takes is a simple phone call to have all the lights switched off. Then one more phone call seconds later to have them all switched on again. This sequence is key, presenting the alleged romance of megalomania, that experiencing a moment’s magic at the expense of immense suffering is something a leader with that much political sway could never fully comprehend.

The President, as played by Georgian actor Mikheil Gomiashvili, knows that the end is nigh, but is confident that he’ll be spirited away to safety before it gets to the point where he comes to any physical harm. He is quickly proven wrong, as he and his grandson (Dachi Orvelashvili) are ambushed by the revolting guards in their employ, and are forced to flee into the countryside. Their ensuing journey allows them to survey the land once more, this time from dirt poor mining villages, brothels, decrepit shops, ditches, and finally a beach whose seafront prevents them from escaping further justice.

It’s strange to see Makhmalbaf making films with gun shots, blood splatters, special effects, helicopter shots, and all those techniques associated with the genre thriller, especially as he’s proven in the past that he’s more than adept at projecting these things in ways which aren’t so literal. The adult-child relationship at the centre of the film is its most interesting aspect, and Makhmalbaf manages to humanise these depots without necessarily asking us to sympathise with them.

The climactic suggestion that a grass roots democracy would be as corrupt and violent as a military dictatorship comes across as a mite cynical, the idea that we could ever achieve freedom and happiness a political myth used only to drive people further into the ground.

Lauded at its premiere at the 2014 Venice Film Festival.

Well made and thoughtful, while never demonstrating the director's unique touch.

Looks at the ugliness of the world, but attempts to ask why it's that way.