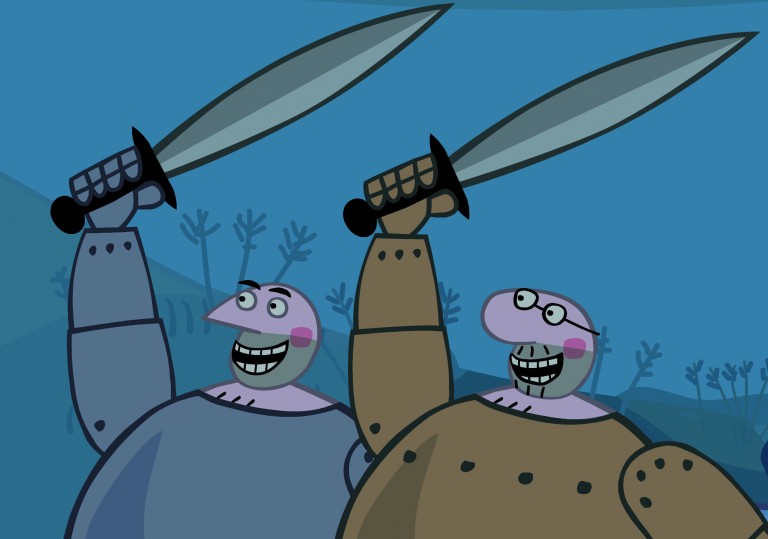 A rare chance to revisit an early animation by the team behind Peppa Pig? Pass, thanks.

Delightfully immature and, despite its innocence, sneaks in a fair few ruder jokes.

There is stuff here to rival the two later, altogether more successful franchises. Their demographic will love it.

A enjoyable portmanteau of animated shorts from the whimsical minds behind kiddie favourite Peppa Pig.

Rather than screening as a cohesive film, The Big Knights consists of compiled episodes from an animated children’s television series originally made for the BBC in 1999. Alexander Armstrong narrates the comical exploits of two clumsy, brash, oversized knights named Sir Boris and Sir Morris, voiced by David Rintoul and the booming Brian Blessed respectively. Each episode revolves around a self-contained adventure in which the knights, along with their giant pets Sir Horage the dog and Sir Doris the hamster, must perform some task or overcome some foe in order to help the residents of their homeland, the Mediaeval-looking Kingdom of Borovia.

The show is incredibly derivative, although not necessarily in a bad way. Despite taking features from ye olde Middle-Ages – such as horses, witches, kings and castles – there are also time machines, vampires, motor cars and hydroelectric dams. The sense of humour is immature and illogical, but in an innocent way, similar to children’s cartoons such as Spongebob Squarepants, with jokes that infuse parody and scattergun pop-culture references. The episodes themselves are pleasingly diverse, showcasing a range of imaginative episodes; for instance, a straightforward quest to deliver two princesses safely through the forest immediately follows a complex, physics-bending time travel caper.

You might recognise the distinctive, picture-book illustration style as coming from the same animation team who would go on to create Peppa Pig and Ben and Holly’s Little Kingdom. This is an earlier, cheaper attempt at similar themes, and there are a couple of fine-tuning issue, including instances where the animation looks cheap, or the same sequence has been reused over and over. However, there is a certain rawness to this early incarnation of this style, which complements the raucous mirth at the heart of the show.

A rare chance to revisit an early animation by the team behind Peppa Pig? Pass, thanks.

Delightfully immature and, despite its innocence, sneaks in a fair few ruder jokes.

There is stuff here to rival the two later, altogether more successful franchises. Their demographic will love it.