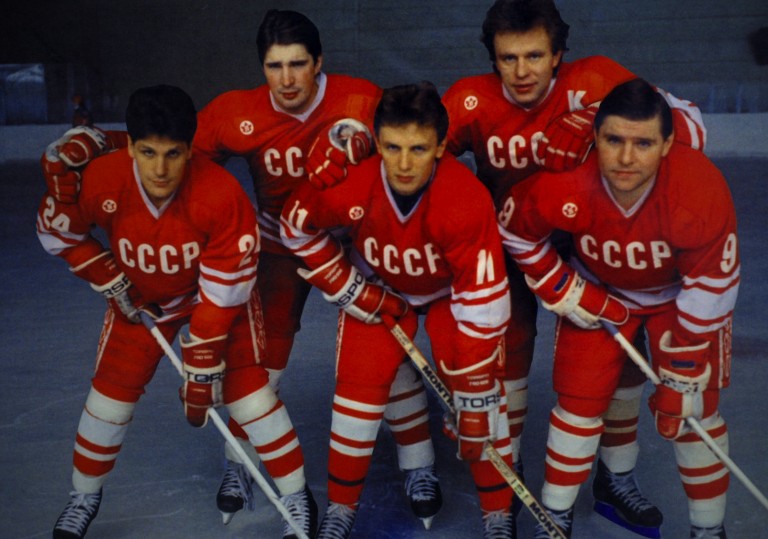 A documentary about Russian ice hockey was always going to be a hard sell.

The story of how the Soviet Union became an ice hockey powerhouse is weighed down by political subtext.

“I’m busy,” quips Slava Fetisov, defenseman, Soviet sporting legend and the subject of Gabe Polsky’s Red Army. He stares at his phone, lost in his emails (or perhaps taking a subtle selfie?). Fetisov’s ungainly attitude does nothing to undo tired stereotypes of Russian severity, his unshowy indifference playing into his veteran status. Fetisov proceeds by giving his interviewer (Polsky) the finger. Yet, there is a magnetism in his storytelling as he and his former teammates race through personal memories as players in postwar Russia.

Hockey, the film claims, served as “a demonstration of Soviet superiority,” created by Stalin in order to dominate the West. In detailing the turmoil that the titular ‘Red Army’ underwent, from their traumatising experiences under coach Victor Tikhonov to the exhausting psychological training received from poker-faced chess masters, Polsky takes great pains to humanise the unfair, American image of these players.

Polsky relies too heavily on subtitled exposition laid over gimmicky imagery of newspaper clippings, bombarding with graphics and facts. None of this is helped by Christophe Beck’s score (he of Frozen fame, now a go-to composer for ice-related feature films), which jockeys the film along at an uneven pace, dramatically under-scoring the film’s already-unbalanced and hyperactively edited emotional beats.

Moments of pathos exist within Polsky’s patchwork, and it’s refreshing to hear the praises of socialism sung. Fetisov’s parting words emphasises the importance of teammates, of doing stuff “collectively” and being “proud of what team you play in.” It all feels a little too on the nose. By focusing less on his characters and more on a supposed dark side of Russian hockey, Polsky’s film is less documentary than it is didacticism.

A documentary about Russian ice hockey was always going to be a hard sell.