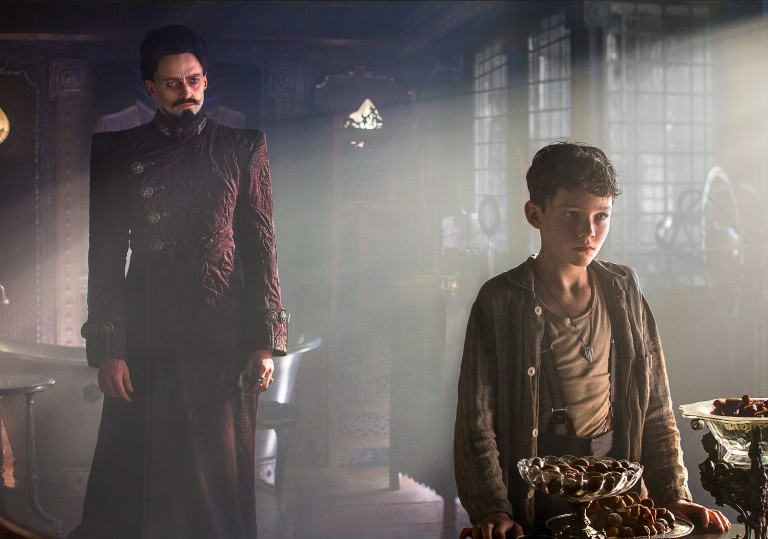 Can’t wait to hear the reason for casting a white girl as Tiger Lily.

Dear lord, it’s like Rooney Mara was crushed by a United Colours of Benetton ad.

How is this about Peter Pan, again?

Peter Pan, or the Boy Who Wouldn’t Grow Up. A title eventually settled upon by author JM Barrie as he diligently transcribed those stories which had once so enthralled the Llewelyn Davies children. ‘Wouldn’t’ being the operative word at play. Peter Pan personified the aching desire for an adulthood rejected, for youth and innocence eternal; for the protected childhood of Barrie’s brother, dead in an ice skating accident at 14.

That longing heart is muted now, lost within the clamour for cash money and forced whimsy, as Joe Wright’s blockbuster prequel to Barrie’s classic bellows: ‘But what if Captain Hook was once good? A grownup Tom Sawyer-type with the dashing looks of Garrett Hedlund?’ ‘What if pirate ships had flamethrowers that could scorch the wings off an entire flock of fairies in a single blast?’ ‘How could we work in an entire crowd of slave-miners singing Nirvana’s ‘Smells Like Teen Spirit’?’

Pan may be vibrant – fervently creative, even – but at the cost of so wilfully ignoring its own pedigree, there’s a heartlessness to it. The Boy Who Wouldn’t Grow Up is now the prophesised Chosen One, the saviour of Neverland, Jason Fuchs’ screenplay forcing Peter Pan into that archetypal journey of maturation and teaching him what he would loathe the most in this world, responsibility. Barrie’s intention was never for Peter to be a hero; he was obstinate, selfish even. He was merely a child revelling in childhood. His famous declaration that “to die will be an awfully big adventure” was spoken not out of bravery but, as the narrator explains, out of an ignorance of what a full life could be.

Barrie’s text isn’t sacred, nor should it be; Peter Pan’s legacy has thrived under the guidance of new voices and perspectives. It’s genuinely welcoming to see Neverland’s Native American tribe refigured into a cultural mix of every colour and creed, to deftly skirt the original’s implication that Native Americans were as fabled as mermaids and fairies. Goodwill, of course, immediately spoiled by the casting of a white woman (Rooney Mara) as Tiger Lily; dressed up like she’s headed to Coachella for a weekend spent culturally appropriating with wild abandon.

It’s one thing to play with detail, but it’s another to fundamentally alter the heart of your story. As enchanting as it may be to see a flying pirate ship take on a squadron of spitfires, even dragging Barrie’s Edwardian timeline into World War Two directly ties Peter to an era which has become a cultural shorthand for the loss of innocence. In that tumbling, chaotic rush to be at its most imaginative, its most magical, Wright’s Pan has somehow identified itself as completely antithetical to what Peter Pan should represent. It’s like rewriting Atlas Shrugged as a Communist pamphlet. It just doesn’t feel right.

Can’t wait to hear the reason for casting a white girl as Tiger Lily.

Dear lord, it’s like Rooney Mara was crushed by a United Colours of Benetton ad.

How is this about Peter Pan, again?