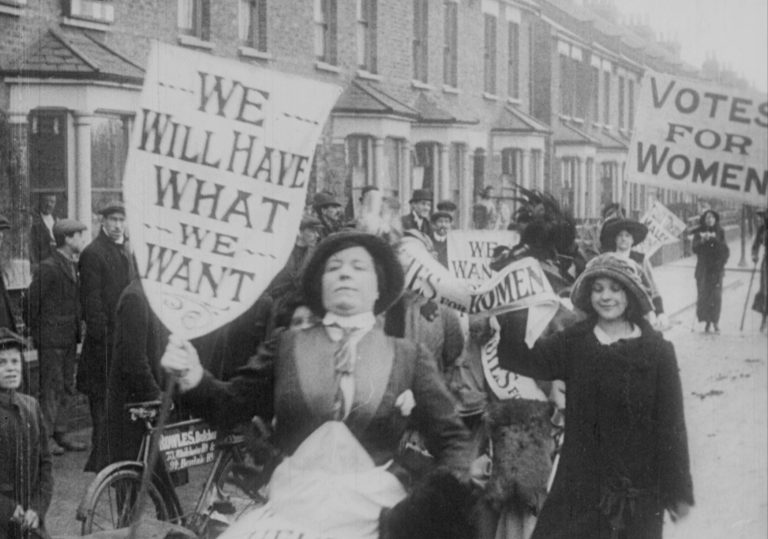 For educational purposes only?

Hit and miss, fun and serious, black and white.

Sarah Gavron’s Suffragette has brought Emmeline Pankhurst and her feminist foot-soldiers back into the limelight over 100 years on from their most prominent activities. As a complementary accompaniment to this release, Bryony Dixon and Margaret Deriaz have programmed a 75-minute collage of black-and-white, silent BFI archive footage of suffragettes in action. Mingled in and adding welcome dynamism are examples of cinema’s characterisations of women during that era.

These are stirring words. They are an incitement to do the opposite of what women have been advised to do since day dot. The battle cry is a deliberately puzzling pivot for a medium that is silent save for a jaunty piano score by Lillian Henley. There is a disconnect here between intention and result. While it is laudable and romantic to release old film galore, the material’s inherent inflexibility mean that although, at best, it is an energising tribute to liberation-driven women, at worst it’s a fusty old history lesson that exists purely because it existed, rather than because a storyteller moulded it into a shape. To those fascinated by history or archive film or the suffragette movement, this would be essential but to the casual moviegoer it’s a hard sell.

This isn’t the case all the way through. A jolly pinnacle comes with footage of little Did’ums, a comic anti-authoritarian character from 1912. She presents as a small girl with corkscrew curls, a lacy dress and a wide brim hat. ‘Did’ums Diddles The P’liceman’ announces the curlicued title card for her segment and so she does, giving him the runaround like a naughtier version of Raymond Compton’s creation, Just William. The police officer ends up covered in mud. Fellow officers arrive on the scene. Didums hams it up as a scared, wide-eyed child and the original policeman is reprimanded. What a manipulative terror! But what fun she has! The twist is that Did’ums is a little boy in drag. But if anything this only adds to the subversive fun occurring. It’s a thrill to see little Did’ums existing in a liberated space and not being punished for it.

There is much more to come in archive snippets taken from various uncredited directors. Within the fictional realm, there are caricatured depictions of suffragettes as harridans and in the ‘Tilly’ films fun-loving young women up to antics. Then comes the documentary material marking a slump in the narrative momentum. Angela Lansbury’s politician grandfather, George Lansbury is shown as an early male feminist, a historic march is Newcastle goes down and we are party to newspaper headlines detailing the arrest of Pankhurst. There’s Emily Wilding Davison’s tragic end and coverage of what the suffragettes did during World War Two, a riposte to anyone who would claim that feminism involves separation from outside concerns.

The Sisters Uncut at Suffragette’s BFI London Film Festival premiere is a sign – as if one was needed – that the suffragettes legacy is ongoing. It’s good that this documentary footage exists for those that want to see forebears in action. Title cards provide spare context for the images scurrying across screen but as a whole the collage is more impressionistic that instructional.

For educational purposes only?

Hit and miss, fun and serious, black and white.