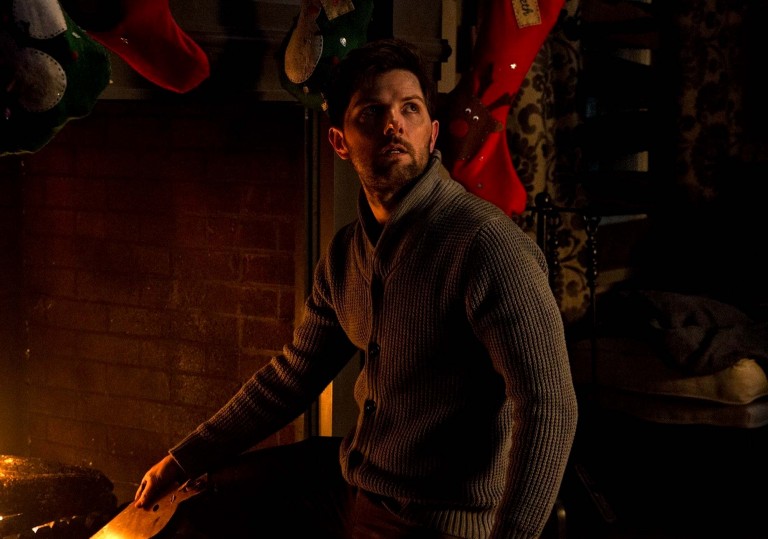 Fun while it lasts.

Can think of far better things than spending Christmas with the Krampus.

Adam Scott and Toni Collette have a Christmas to forget in this enjoyable creature feature.

In the spirit of Gremlins and other, lesser alternative festive fare, Krampus concerns a white bread family whose Christmas descends into chaos after they unwittingly summon dark forces. Though it lacks the ingenuity and wit of that particular cult classic, it’s a fun and occasionally thrilling seasonal stocking filler which boasts a game cast in the shape of Adam Scott, Toni Collette, David Koechner and Allison Tolman from TV’s Fargo.

According to ancient German folklore, the Krampus is a horned demon that visits naughty children on Christmas bearing not presents but punishment (think of it kind of like the anti-Santa). One issue with Krampus the movie is that the eponymous antagonist is largely restricted to the shadows – instead a small army of sadistic gingerbread men, bloodthirsty teddy bears and other anthropomorphised merry minions are sent to carry out its evil bidding. In principle this absence should create suspense and build intrigue; in practice it achieves neither.

The main problem here, though, is that it’s never entirely clear who the film is for. While older genre fans will most likely dig the Joe Dante vibe, Krampus is ultimately far too intense for younger viewers. A dash more comedy might have resulted in a solid piece of family entertainment. As it is, director Michael Dougherty has succeeded in delivering a curious creature feature that’s more unwanted gift than surprise package.

Fun while it lasts.

Can think of far better things than spending Christmas with the Krampus.