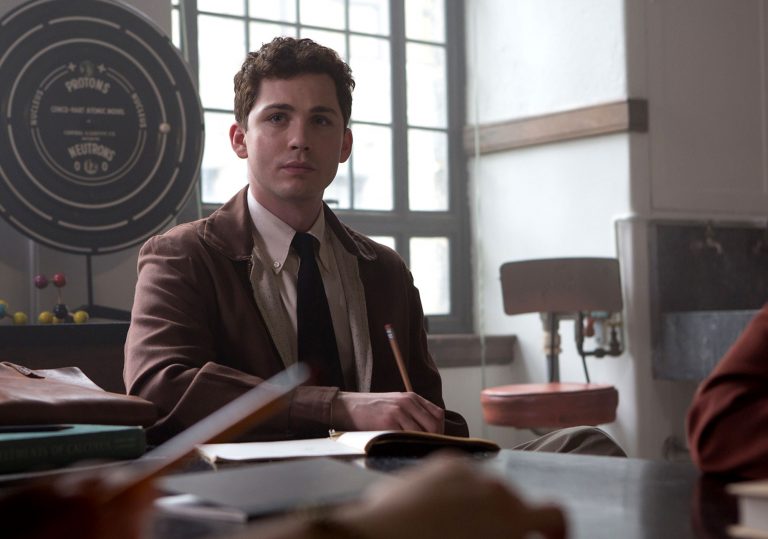 James Schamus is a major talent, so this should be of interest.

It's very solid and admirable, if hardly a fun time at the flicks.

It's a little too stuffy and fastidiously wrought to stick in the mind for long.

Philip Roth’s 29th novel is adapted to the big screen, with intriguing rather than supremely satisfying results.

Another week, another attempt to transpose the work of curmudgeonly literary sage Philip Roth to the big screen. To say that this is one of the better efforts (but is still not that great) goes some way to confirm what a confounding and complex writer Roth is. His genius prose creates no simple path from page to film, even with a veteran screenwriter (and occasional scholar) like James Schamus involved.

Indignation is the story of Marcus (Logan Lehrman), the intellectually gifted, emotionally oversensitive son of a Jewish, New Jersey butcher who is given the opportunity of transcending his working class lot by taking up a place at university. Yet, as much as he’s trying to distance himself from his salty economic background, he is also trying to break free from what he sees as religious cliqueism and the inward looking Jewish community. Even after renouncing his faith, he is forcibly thrown together with other Jewish students and is swiftly asked to join a Jewish fraternity. His only release from the the frustrations of spiritual identity is his relationship with Sarah Gadon’s Olivia, who further temps him down the path of idle transgression.

The film comprises of lengthy, elegantly executed dialogue sequences in which characters argue in detail about their frustrations and anxieties. The centrepiece of the film sees Marcus take up rhetorical arms against Tracy Letts’ Dean Caudwell, who appears to be victimising the student for not wanting to conform to his strict scholastic programme. Both actors charge at the scene with supreme confidence, and it seems that having them just speaking the words is the best and simplest way to channel the essence of Roth.

Yet the film never seems to be anything more than a series of learned discussions with no profound consequence. Confusion begets more confusion, and revelations and lessons are notable in their absence. Marcus’ sense of moral superiority is pounced upon for the sake of empathy, suggesting that he’s the enlightened one while Caudwell is his backward-thinking foil. And the effort the actors place on enunciation and dynamics often leaves the dialogue feeling like it’s being parroted rather than understood and expressed.

Bravo to Schamus for making something which is so focused on detail rather than big, broad drama, but too often the events in the film skirt the bounds of interest rather than break through to its core.

James Schamus is a major talent, so this should be of interest.

It's very solid and admirable, if hardly a fun time at the flicks.

It's a little too stuffy and fastidiously wrought to stick in the mind for long.