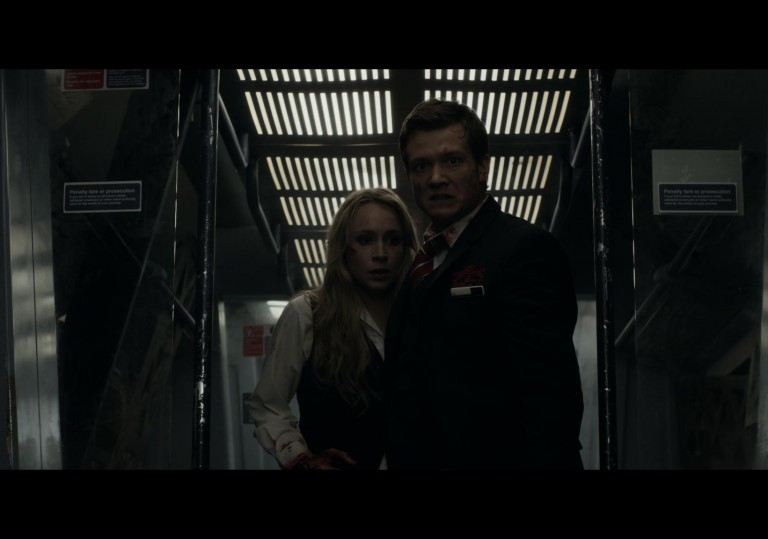 A straight-to-DVD genre film from an as-yet unproven director.

Better than your average B-movie, it strikes a sound balance between horror, drama and comedy, even if the monsters are a bit naff.

Auspicious directing and acting, but ends with a whimper.

Werewolves on a train is the simple concept behind this robust British genre work-out.

In Paul Hyett’s Howl, a werewolf terrorises stranded passengers on a broken down train. This can be condensed down to a distinct formula: monster terrorises victims in original setting. However, next to other films which follow a similarly simple structure – say Deep Blue Sea (B-movie about genetically modified sharks attacking a research centre) and Beyond the Rave (Hammer revamp in which the undead organise a bacchanal in the woods) – Howl seems relatively intelligent in comparison. There’s a full-moon and a spooky forest, but that’s it in terms of conventional genre iconography.

The film stars up-and-coming Ed Speleers as train manager Joe, who perfectly embodies the sympathetic everyman. After losing out on a supervisor position to a sneering colleague, Joe is sent to check tickets on a midnight service from London Waterloo to the fictional station of Eastborough. The only consolation is that the women he pines for, Ellen (Holly Weston), is pushing the refreshment trolley.

From Joe’s bemused perspective, we are introduced to the passenger-cum-victim stereotypes: an arrogant banker; a workaholic businesswoman; a broody delinquent; a nerdy accountant; a drunk football fan, replete with a kebab; a miserly old couple and a teenage girl who doesn’t understand the phrase “quiet zone”. On one hand these passengers are just unpleasant enough towards Joe that, when the werewolves descend, there is a vicarious pleasure to be had in watching them get picked off.

On the other hand, the film convincingly shows this motley crew’s transformation from strangers wordlessly sharing a commute, into a unified community fighting against a common foe. If only because of his conductor’s uniform, Joe assumes a leadership role, while Elliot Cowan’s banker character demonstrates how survival instinct can bring out the worst in some. The logo of the train’s manufacturer, Alpha, is a subtle comment on the situation that develops as the two vie to take charge of the pack, while the real big dog lurks outside the carriage.

The werewolves themselves are admittedly quite disappointing. Director Hyett has worked in various make-up departments before directing, so it seems incredible that he would be satisfied with these lacklustre CG monsters; they look more like humans who have been turned inside-out than the furry beasts we have come to expect. They certainly aren’t werewolves of the traditional sort. Once bitten, characters are transformed and don’t have the comfort of turning human again when morning arrives. Given this contagion element, it is worth wondering whether a zombie or vampire attack might have played out almost identically, if only with less howling.

A straight-to-DVD genre film from an as-yet unproven director.

Better than your average B-movie, it strikes a sound balance between horror, drama and comedy, even if the monsters are a bit naff.

Auspicious directing and acting, but ends with a whimper.