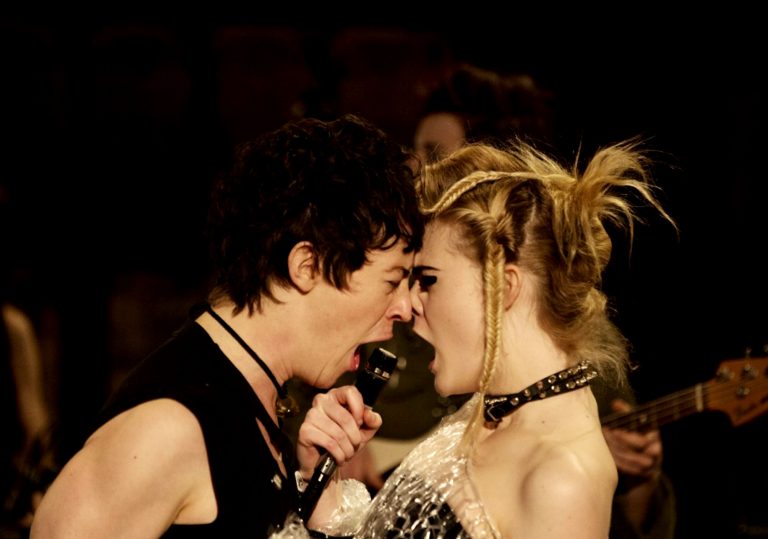 A much-welcome return to the big screen for John Cameron Mitchell.

Far less punk than it thinks it is.

At best a big screen version of a teenage boy’s fantasy, at worst, a misogynistic bore.

It’s been eight long years since John Cameron Mitchell’s Rabbit Hole landed Nicole Kidman an Oscar nomination. As such, the prospect of the director returning to his anarchic roots with a script based on a Neil Gaiman short story is – in theory at least – a welcome one. How to Talk to Girls at Parties sells itself as a cosmic coming-of-age story, concerning aliens, punk, and the transcendental nature of true love.

Awkward teenage punk Enn (Alex Sharp) encounters the mysterious Zan (Elle Fanning) after he and his rowdy friends accidentally crash a strange house party in Croydon. It’s revealed that she’s part of an alien enclave touring earth – not so much manic pixie dream girl as robotic alien dream girl – and (for some inexplicable reason) she becomes enamoured with Enn, absconding from her extra-terrestrial cohort to spend time ‘doing punk’ with Enn and his friends.

‘Doing punk’ is all very nice and friendly in this version of 1977 London – the teenagers listen to records, go to gigs put on by Nicole Kidman’s Queen Boadicea, who hams it up magnificently and style-wise, appears to be channelling David Bowie as The Goblin King in Labyrinth. At one point, Zan cuts her dress with a pair of scissors, and Enn exclaims excitedly, ‘Now that’s punk!’ There’s a cuddly, costumey sort of feel to it all, like watching an approximation of punk that’s been sanitised for mass-market consumption – but that doesn’t stop misogyny sneaking in through the lecherous teenage boys and patriarchal alien community.

The chief concern with How to Talk to Girls at Parties is it ‘feels like’ many things, but never an entirely original idea – certainly not in the way Cameron Mitchell’s past work has. Part Roman Holiday, part ET, part Vivienne Westwood market knock-off, it feels tonally mismatched, and it’s difficult to really invest in the romance at the heart of the story when there’s so little chemistry between Sharp and Fanning. In padding out the 18-page source material, Cameron Mitchell and his screenwriting partner Philippa Goslett overcomplicate the poetry of Gaiman’s original writing, and create something that doesn’t have anything interesting or memorable to say.

A much-welcome return to the big screen for John Cameron Mitchell.

Far less punk than it thinks it is.

At best a big screen version of a teenage boy’s fantasy, at worst, a misogynistic bore.