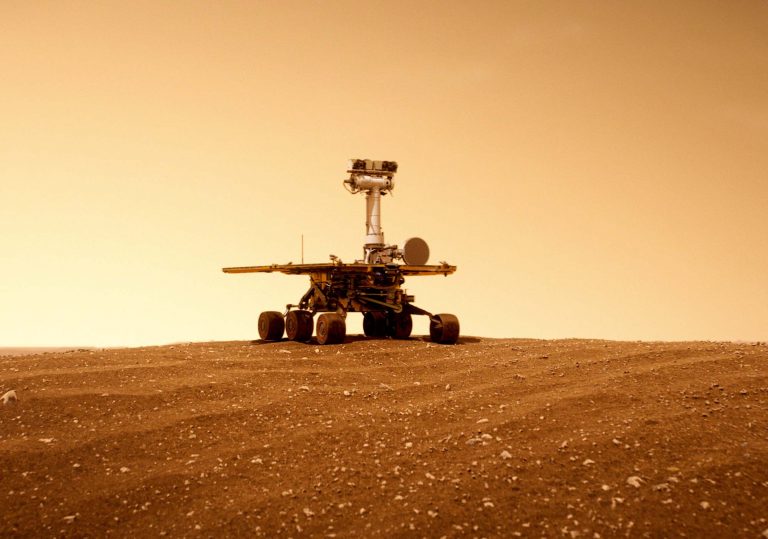 This film plays like a glossy promotional document of the (admittedly incredible) work undertaken by NASA’s jet propulsion engineers and robotics experts in sending two “rovers” to Mars in the name of old fashioned human endeavour.

Indeed, the angle here is to reframe Opportunity – the nickname given to one of two rovers blasted over 300 million miles to the Red Planet – into a cutesy robo pal who’s all alone and dealing with the manifold perils of a treacherous, sand-blasted wilderness.

Initially, the film is made up of talking head interviews with the various NASA nabobs involved in the project, and there’s much fascinating lab footage which does well to visually express the exacting toil of actually putting one of these toys together. And beyond the robot itself, there’s the unfathomable logistics of actually posting and dropping a fragile object like this on an inhospitable alien planet – a nuclear-sized version of airbag technology comes into play in order to ensure Opportunity and sister Spirit aren’t turned into space debris before their time.

Once the rovers have landed safely and have begun their pootling about, the film tails off somewhat as we’re then treated to scads of animated footage showing the pair just rolling across arid plains. There are attempts to force the viewer to invest in their fate – Rocky verge! Dust storm! Dinged-up wheel! – but it all feels a little false, and at the expense of the actual interesting question here: how was this all done?

Director Ryan White delivers an entertaining, albeit highly selective account of this project, brushing over any details that might lend this story a modicum of existential weight. The hows and whys are very much on the back-burner in favour of anecdotal accounts of Opportunity’s voyage and focus on the “emotional” aspects of keeping this bot alive and running.

It’s a head spinning to discover that Opportunity was up, working and collecting data for eight years – anything over 90 days was considered a win. Yet, it’s hard to inject excitement into a segment in which the rover travels 0.1 miles per hour between craters. The “fix” for this is Blake Neely’s bombastic and insistent score which clobbers the viewer with its feel good vibes. Sometimes, this music is so high in the mix that it’s impossible to hear what the interviewees are actually saying.

In all, it’s a decent account of an impossible dream made real, but it’s all far too watered down to have any impact beyond the inspirational piece of advertorial that it is. And as a piece of narrative, we were hoping for Silent Running, but got Short Circuit.