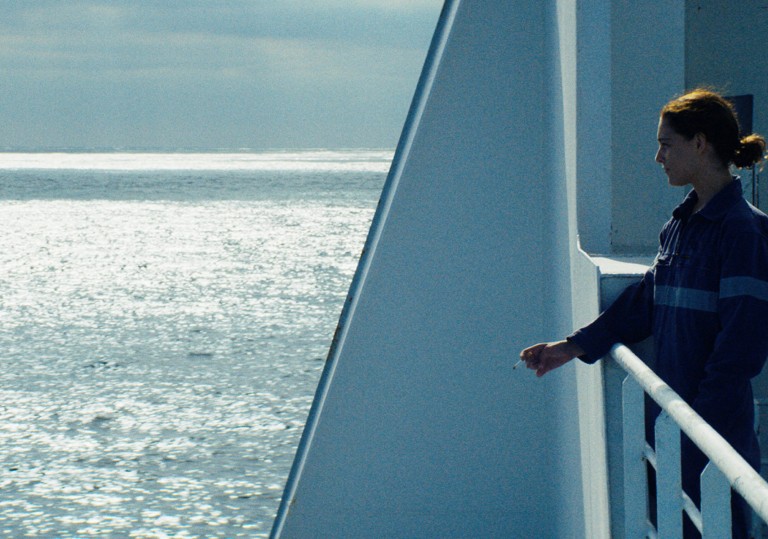 Always interested to see what Ms Labed is up to.

She's great in this, though towers above the material.

You can see Labed taking over the world in a few years.

If the quality of storyline and intensity of drama had been anywhere near the high level of its lead performance by the Greek actress Ariane Labed, then we really might have been on to something with Fidelio: Alice’s Journey. This sensible, sensual and slow burning romance is like an Emmanuaelle stripped of all its lurid passion, leaving little but cold intellectualising about desire, sex and the nature of long-term coupling.

Labed is Alice, the sole female engineer on a freighter who is forced into a long-distance relationship with her Scandinavian land-lubbing boyfriend (Anders Danielsen Lie). They email, they Skype, they pine for one another in various silly ways, but the fact of the matter is that neither party is being truly satisfied with this set-up, and so Alice decides to strike up an arrangement with the ship’s captain (Melvil Poupaud) where he regularly visit her quarters for dirty talk and all the rest.

Much of the film takes place on this ugly vessel, and director Lucie Borleteau and cinematographer Simon Beaufils, don’t come up with a way of imbuing this space with any real atmosphere or character. It even sometimes feels like they’re on a television set when they’re down conducting sexually frank chats in the mess hall. There’s some clunky plot foreshadowing in the early stages when we see just how dangerous working in a ship’s engine room can be, with lower-downs ordered into dangerous situations by unfeeling higher-ups. Indeed, the film opens on a death, which appears to resonate deeply with Alice and may be the reason that she decides to fulfil her insatiable sexual appetite while the getting’s good.

It’s all very middle brow, with much of the dialogue skewing away from naturalism in order to force direct discussions on the film’s broad themes. The remainder of the ensemble, who come from a variety of ethnic backgrounds, work well together, and they certainly help when it comes to making Alice’s decision-making process a little more fraught with social and physical peril.

Always interested to see what Ms Labed is up to.

She's great in this, though towers above the material.

You can see Labed taking over the world in a few years.