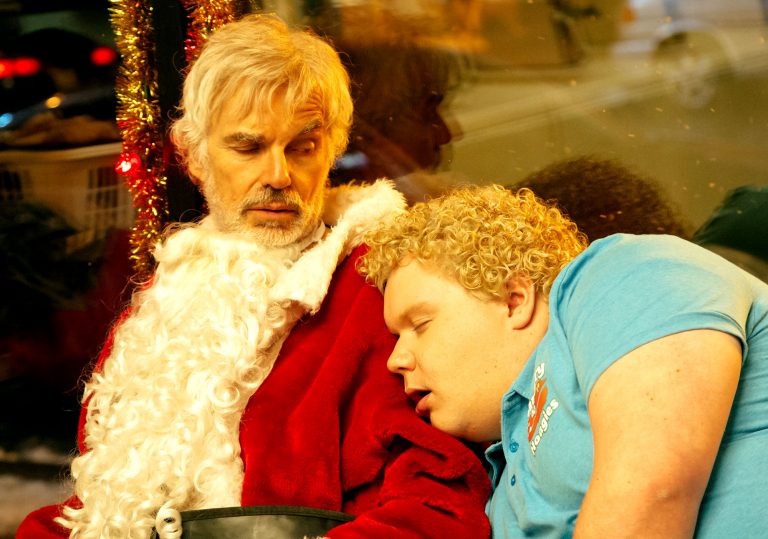 Maybe the 2003 original was an American comedy that actually did warrant a sequel.

This is the kind of film you could imagine a booze-soaked department store Santa Claus making in return for some pocket change and a soiled deck of Lucky Strike. It gets the job done on the thinnest of thin margins, but the fourth-rate handiwork is glaringly evident in every slapdash frame.

A gigantic (and slightly worrying) 13 years after Terry Zwigoff’s original lewd opus, southern silver fox Billy Bob Thornton reprises his role as said Christmastime curmudgeon, trundling through the exact same coarse repertoire as he did all that time ago, with involuntary urine once more dribbling into his fur-lined booties. Yet where the 2003 film drew on the tragic male self-laceration of Charles Bukowski and was, despite its superficially populist façade, an art movie, this one seems purpose primed to be screened on the back of an airplane seat with “Edited For Content” appearing as an opening inter-title.

Still, there is the feeling that no-one could play the unsmiling, nihilistic Willie Soke with the nonchalant relish of Thornton, his absolute commitment to suppressing meaningful human relations making him, if not the modern day Mr Scrooge we need, then the modern day Mr Scrooge we deserve. His dismal prospects and lack of humanity are explained early on when he is reconnected with his equally repulsive mother, played by Kathy Bates, who regales him with ribald tales of youthful indiscretion and sundry abuses chalked up as early days life lessons.

A Chicago children’s charity is the target of a shoddily executed heist, with Tony Cox’s double-crossing Marcus reprising his role from the first film as a violently dyspeptic helper elf. It really is the exact same jokes repeated over again, and no amount of inventive swearing can cover up for that. Maybe the extended hiatus between episodes is down to the fact that this is more of a remake than a sequel. The hope is we’d have forgotten everything from the first one, and would happily choke it all down once more.

Christina Hendricks turns up as the happy-clappy face of the charity, while her husband, played by Ryan Hansen, is tee’d up as the baddie of the piece (though never really materialises as such). The film is sadly driven by a smash-and-grab impulse, the quick laugh always trumping any depth, story, meaning, surprise, coherence or, whisper it, poetry. The biggest bust of all is the return of Thurman Merman (Brett Kelly), the tubby latch-key blockhead who is now as annoying a screen presence as his character is supposed to be to Willie.

If this thing does end up going on to make a ton of money at the box office (there really isn’t that much competition terms of holiday-themed comedies in 2016), the prospect of spending another 90-minute dirge with charming derelict isn’t an altogether unpleasant one. It would be nice to get some writers in with higher ambitions than racking up the very cheap cracks.

Maybe the 2003 original was an American comedy that actually did warrant a sequel.