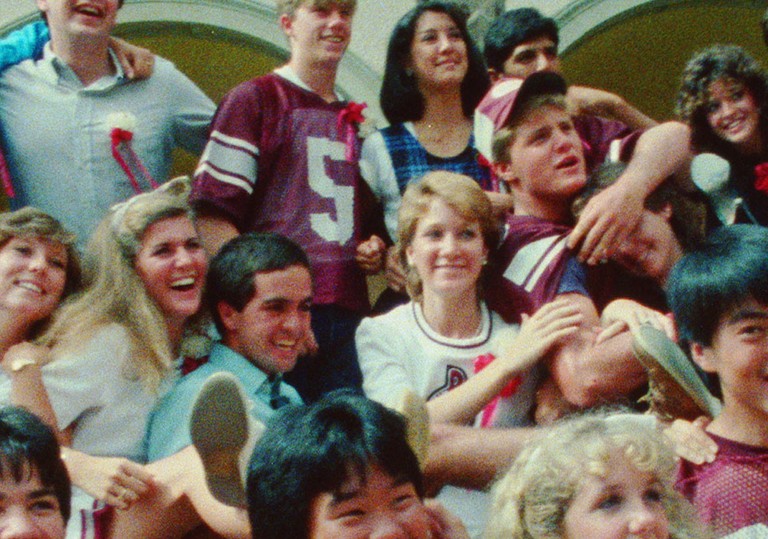 You probably don’t want to know what your own schoolmates are doing these days let alone a bunch of SoCal no-marks you’ve never heard of.

An enigmatic snapshot that loses its charm under too much scrutiny.

We all love a bit of Where-Are-They-Now?-ing. It’s the sort of idle puff that has filled the back pages of music mags for years. Who can fail to be moved by the deep and delicate intertwining of the multitudinous threads of our human tapestry that finds some frothy-haired bass player from a fey ’90s shoe-gazer band eventually designing bespoke inflatable kennels for minor Saudi royals, or the drummer from the Sneaker Pimps leading award-winning corporate hang-glider retreats off the Orkneys?

It’s something Keva Rosenfeld’s redux/extended/anniversary cut of his 60 minute 1986 High School documentary All American High exploits to breaking point when inviting us to check in with its cast of Modesto, Ca students a full 30 years after their school lives were committed to film. But before we get to find out where they are now, we need to know who they were then.

The main body of the film comprises Rosenfeld’s fly-on the-wall study of a bunch of well-fed Californian teens participating in a gloriously grim series of pastiches on best-forgotten ’80s Republican-Right banalaties that includes surfing lessons, mock weddings, a video arcade situated within the school, lessons on how to decorate an apartment and – with a cheerless nod to the in-built obsolescence of the one-size-fits-all pitfalls of Reagan’s American Dreaming – a ‘Survival of Singles’ class that teaches 15-year-old kids how to win a new partner after they get divorced. There’s even an a class in which an avuncular recruitment officer from the US Army shills five grand signing-on bonuses and constant water-skiing.

It starts brightly, with some bumfluff-tached Iron Maiden fan pontificating the ‘Punkers, Preppies and Metallers’ that make up the school’s ranks. Then we cut to some game female Finnish exchange student who gives us the outsider skinny. She’s chipper enough company, but when it starts to dawn that hers will be the only view of school life we will hear about for the rest of the film attention starts to drift. The Metallers and Punkers are shunted aside for Jocks and Cheerleaders, with only the odd fleeting shots of skinheads wearing Sid Vicious t-shirts and Judas Priest devotees leaning against chain-link fences to fill in the blank generation.

But if Rosenfeld misses a few narrative tricks, he makes up for them with grainy, half-remembered scenes of homecoming parades, keggers, dances and Friday night-football that belong between the lines of a song co-written by Bruce Springsteen and Stephen King. These vague, liminal interludes are welcome but can’t quite paper over the cracks at the core of a film that was hobbled by its initial choices.

The closing 20 minutes catches us up with the growed-up kids from the class of ’86, but because the original film took so little interest in anyone’s perspective other than its central subject a lot of this – while being generally interesting on a rubbernecking level – feels forced, arbitrary, underdeveloped and tacked on purely to make the original film up to feature length.

You probably don’t want to know what your own schoolmates are doing these days let alone a bunch of SoCal no-marks you’ve never heard of.

An enigmatic snapshot that loses its charm under too much scrutiny.