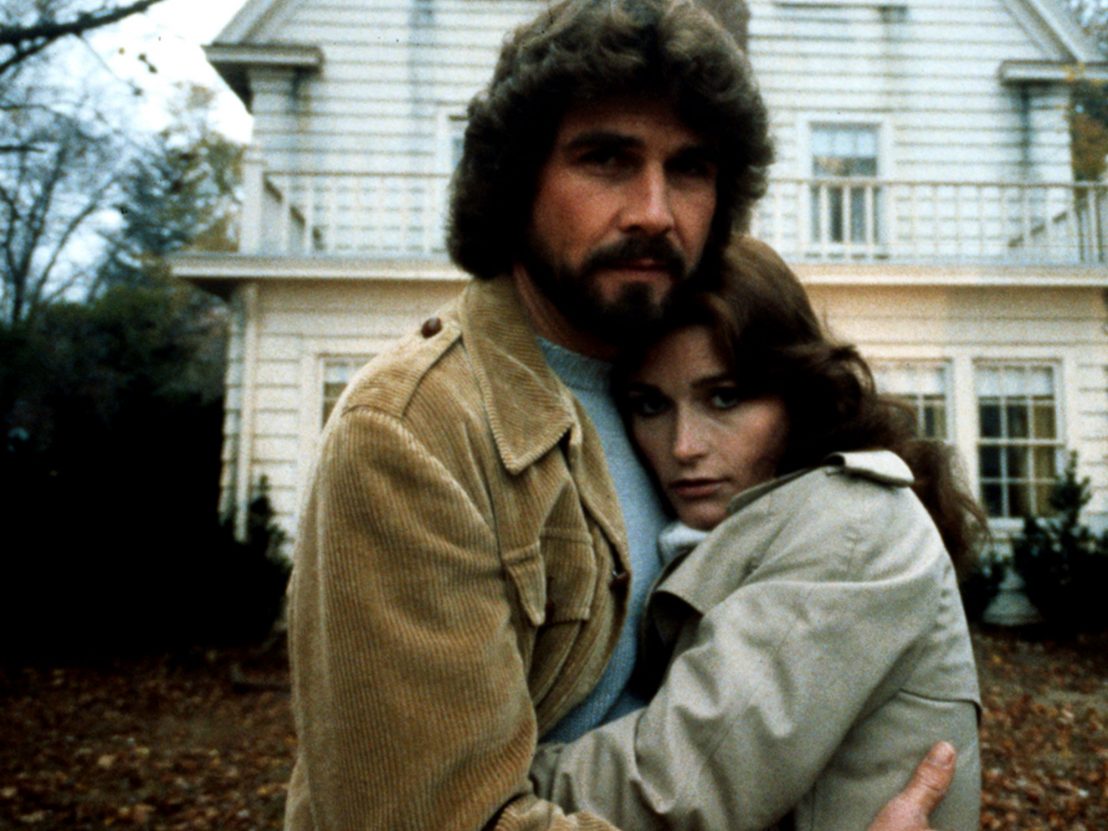 Stuart Rosenberg’s The Amityville Horror resides in a strange and ambiguous corner of US history. It was based on Jay Anson’s controversial 1977 book of the same name, which in turn was drawn from the equally controversial experiences of the Lutz family, who had by then become a cause célèbre in the media. Having fled their Long Island home only weeks after first moving in, the Lutzes were regarded by some as survivors of a paranormal encounter, by others as victims of their own dysfunction and delusion, and by yet others as manipulative, attention-hungry hoaxers.

It’s impossible to say where the truth lies, but that is not enough to prevent a good story being exploited both for genre thrills and for a snapshot of the fault lines in ’70s America. Despised by critics but loved by cinemagoers, the film grossed over $86 million at the US box office.

Right from the start, the iconic appearance of the house at 112 Ocean Avenue – actually a New Jersey home converted to resemble the original after the filmmakers were refused permission to shoot on location – comes to the fore, shown in an exterior wide shot with its two illuminated attic windows serving as the eyes for what is really the film’s main character. “Houses don’t have memories,” George (James Brolin) assures his new bride Kathleen (Margot Kidder) as she frets about the murders that took place there a year earlier. Yet Robert Brown Jr’s editing, violently intercutting present scenes in which the newlyweds view the house for the first time with past scenes of brutal slayings in those same rooms, suggests the contrary: that this house echoes with its own bloody history.

“I can’t get the story right,” says Sergeant Gionfriddo (Val Avery), as he tries to get to the bottom of what is going on. He was the investigator on the scene after the DeFeo murders of 1974, and now he has returned to the house after two of its doors were inexplicably blown off their frame from inside the house. While he tries to rationalise what is going on, his old friend Father Delaney (Rod Steiger), a priest but also a trained psychotherapist, has suffered one freak mishap after another since visiting the house to bless it.

The Lutzes too notice that something is not right about the house. The temperature keeps dropping. Windows open and close by themselves. Flies swarm out of season. A black goo floods the toilets. Money goes missing. The family dog digs obsessively at a basement wall. Strangers appear at the door – and then disappear. A cross on the wall inverts. Amy (Natasha Ryan), Kathy’s young daughter by a previous husband, acquires a new imaginary friend, Jody, whose presence Kathy herself begins to sense. And as illness (or worse) takes over, George, so loving at the start, becomes distracted, mean-tempered and even violent.

While Sandor Stern’s script certainly never shies away from the supernatural, it comes deliriously overdetermined with additional frames of interpretation to support its narrative structure. Delaney appears to be suffering a demonic attack instigated by the house, but it might just be a broader crisis of faith brought on by the collapse of religion in a secular age (the one time we see him preaching, it is to a conspicuously empty church), or even a mental breakdown (“I believe we create our own demons in our minds,” he is told by a younger, more sceptical colleague).

Meanwhile, George’s rugged beardy look places him somewhere between the masculine ideal of the 1970s and the unhinged appearance of Charles Manson (in a film where much is made of George’s close facial resemblance to a past psycho killer). It is of course not impossible that George becomes possessed by whatever bad juju there is in a house said to have been both the site of a Shinnecock tribal ‘exposure camp’ and of a Salem refugee’s Satanic rituals.

But it is also possible – indeed it is made explicit – that we are watching a man being torn apart by financial difficulties, impotence and the emasculating pressures of having to living with three children who are not his own. We certainly see the paranormal at work in the film, but its manifestation at one point as a literal flying pig hints at its proverbial implausibility as an explanation, casting prominence instead on interpretations of a more psychological or sociological bent.

The Amityville Horror is also trapped between two pieces of cinematic horror history. It bears the obvious imprint of William Friedkin’s The Exorcist from 1973, as little Amy falls under the malign influence of a friendly seeming spirit that seeks the family’s ruin, and the Catholic church struggles to determine its own position in the affair. Yet with Amy claiming that her playmate Jody “wants me to live here forever and ever”, and with George’s deterioration into a dead-eyed bad dad (even at one point taking an axe to the bathroom door where his family is hiding), it is clear that the film had its own influence on Stanley Kubrick’s The Shining, released the following year.

In truth, The Amityville Horror is not as good as either Friedkin’s or Kubrick’s film. Its pacing is off, there are too many go-nowhere subplots, and it seems just to come to a clunking halt at the end with little real resolution. At the same time, the film’s lack of commitment to any single reading of its narrative architecture is precisely, in the final analysis, what makes it so uncanny.

The Amityville Horror is released by Second Sight on Blu-ray in a Limited Edition Steelbook on 26 June.