As a restoration of the 1976 remake lands on home entertainment platforms, it's a fascinating insight into the on-screen story of this iconic feature creature. 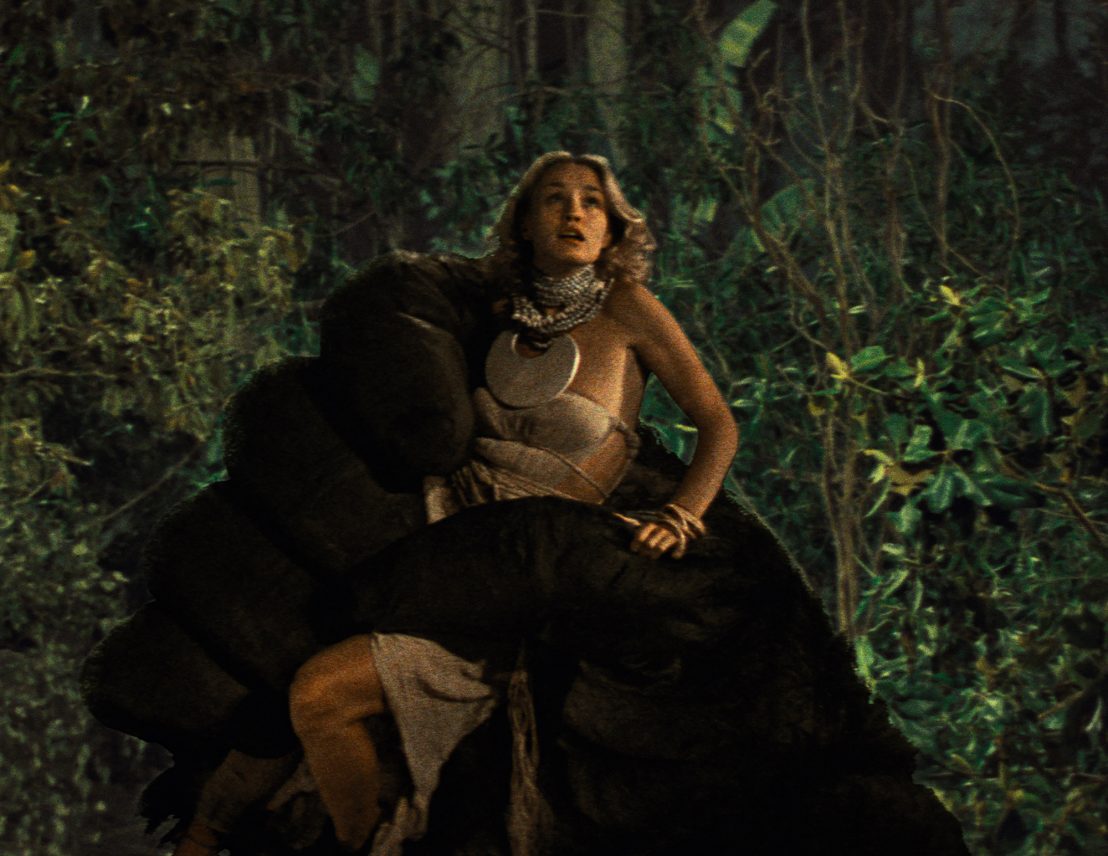 Unleashed in 1933, Merian C. Cooper and Ernest B.Schoedsack’s King Kong was one of the first purely cinematic myths. Although it made glancing reference to Gabrielle-Suzanne Barbot de Villeneuve’ 1740 fairytale Beauty and the Beast, the film was very much its own beast, made independently of any direct literary precedent, and the pithecoid monster of its title was a big-screen icon of the contradictions at the heart of twentieth-century man, elevated but also alienated from his own primal urges by the supposedly civilised edifices of modernity itself.

Cooper and Schoedsack’s Kong would quickly sire a sequel Son of Kong (also 1933, and also directed by Schoedsack), and would later be appropriated by Toho Studios for monster mash-ups King Kong vs. Godzilla (1962) and King Kong Escapes (1967) – but the first official remake would not come until 1976. Though Roman Polanski was first approached to helm (just imagine what he might have made), eventually director John Guillermin would step in, presumably chosen for his ways with dizzying blockbusters (he had just made The Towering Inferno).

An American expedition discovers a gigantic ape being worshipped as a god, rescues the female crew member whom the ape has snatched away for his own, and brings the captive ape back to exhibit in the concrete jungle of New York City where it breaks free, runs amok and has a resonantly tragic fall. All the essential story elements of the original remain present and correct in Guillermin’s revisiting, but there are also marked differences, to match the change in times.

Some of these differences are superficial, but significant. Kong himself is no longer rendered in stop motion, but is essentially Rick Baker in a gorilla suit composited into scenes, along with various masks fitted by Carlo Rambaldi with cables and animatronics to give Kong an expressive look, and even a 40-foot tall, 6.5 tonne mechanical ape which cost half a million pounds to create but was so unconvincing that it appeared in less than 15 seconds of the film. All this is to showcase the best that could be achieved by the special effects of the Seventies to make an entirely mythical creature look vaguely plausible in its interactions with a human cast. For better or worse, this is, for its time, cutting edge. Peter Jackson’s 2005 version would use CGI and mo-cap to bring even greater realism – but then, there never was anything wrong with the original film’s staggered modelwork.

Then there is the shift in politics. Where the 1933 expedition to Skull Island was led by an unscrupulous filmmaker looking to cash in on exotic locations, in the energy crisis of the 1970s, Fred S. Wilson (Charles Grodin) is a company man for Petrox, and hopes to plunder the oil reserves of the hidden island – “bringing in the big one”, as he has promised his superiors. It is only when Fred realises that the oil there is of an unusable quality that he turns his attention to that other big one, Kong himself, as a marketable asset, bringing the beast to New York to exhibit as a touring mascot for Petrox. 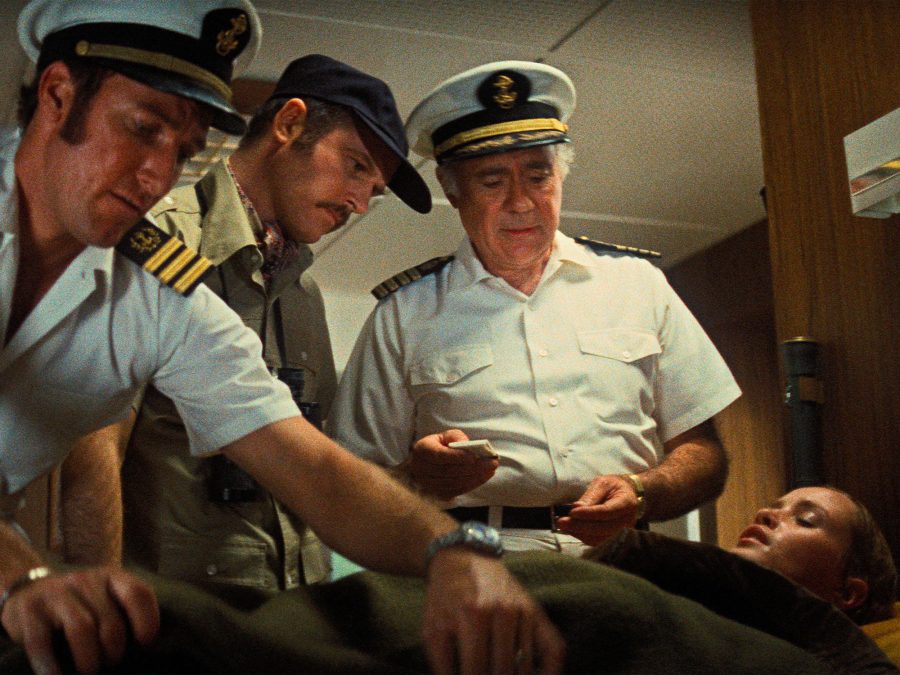 The allegorical equation of Kong and oil is spelt out in Kong’s first (and final) appearance on stage, where his giant cage comes covered in a tarpaulin decorated to look like a giant petrol bowser for Petrox. Both are of course exploitable commodities, with high risks attached, and those who try to harness their power must face the full force of nature. Fred’s insensitivity to the island’s natives (human and otherwise) might best be described as colonialist.

Indeed, he is the embodiment of American corporate imperialism, taking whatever he wants without consent. It is an argument articulated by Jack Prescott (Jeff Bridges), who stows away on the Petrox Explorer to pursue his academic interests in primate paleontology, and who is quick to recognise Fred as what he terms an “environmental rapist”.

The threat of rape is always in the air in King Kong, from the moment that the ship has picked up Dwan (model Jessica Lange, in her film debut), a would-be starlet set adrift on a lifeboat after her own vessel and its crew were blown up in an accident. Of her unusual name, Dwan states that it is “Like Dawn, except I switched two letters to make it more memorable.” It is also of course formed from four of the six letters that make up the name Ann Darrow, the screaming heroine (played by Fay Wray) of the 1933 film.

Dwan describes herself as “the all-American girl saved from an explosion by Deep Throat”, explaining that the only reason that she was alone out on deck when all hell broke loose killing her fellow passengers is that she refused to watch the notorious pornographic film with the film director who was her host and potential employer, but who was clearly trying to take advantage of her. Now as the only woman on board the Petrox Explorer, Dwan is subject to similar unwelcome male attention, even as she makes it clear that she would welcome rather more attention from genuine gentleman Jack, who had saved her life by spotting her afloat in the ocean, and whose hippie-ish long hair, unruly beard and habit of walking around shirtless all lend him a certain ape-like animal attraction.

It is just after this couple has at last made an assignation to get it on that the island’s natives abduct Dwan for a blind date with a much bigger ape. Later rescued by Jack, Dwan will object to Fred’s express characterisation of the creature’s conduct as ‘rape’. Though rough around the edges, Kong is also a gentleman. Indeed, his relationship with Dwan runs in parallel to Jack’s. Fred had earlier accused Jack of “spouting apeshit” – and just before the Jack finally shares his first (entirely consensual) kiss with Dwan, he will tell her: “I’m tired of thinking. The ape had the right idea.”

Another element that situates the King Kong remake in its Seventies setting is its updated location. While Dwan claims to have been made sick with vertigo as a child in the elevator ascending the Empire State Building – where the climax to the original King Kong took place – the new film goes bigger, relocating its final sequence to the then-brand-new Twin Towers (opened 1973), and even featuring Kong leaping from one to the other with Dwan in hand. Kong is attacked not with biplanes, but with flame throwers and military helicopters, evoking the imagery of the Vietnam War that had been playing out on America’s small screens till its end in 1975 – and that had divided audiences in their sympathies for ‘our side’ and ‘the Other’.

This Dino De Laurentiis production is lighter in tone than its predecessor, with more zingy lines and comic clowning from the characters, more focus on the romance between both Dwan and Jack and Dwan and Kong, less straightforward horror and no dinosaurs (although there is an outsized snake). Nonetheless, the values of our so-called civilisation are constantly interrogated. Despite the love triangle that develops between Dwan, Jack and Kong, when the army mobilises to down Kong, Jack will openly be on the side of his simian rival, even cheering him on as he downs a chopper.

And even if Kong repeatedly stomps in to interrupt Jack’s hesitant courting of Dwan, in the end it will not be the beast that stops Jack getting to Dwan, but rather another species more symptomatic of our age, a plague of paparazzi swarming over the dying monster and all around the traumatised woman. In the end, Dwan gets the celebrity that she had previously craved, but by now, as Jack earlier observed, farce has turned to tragedy.

King Kong has been restored in 4K for the first time, and will be released by StudioCanal on 4K UHD Blu-ray, Blu-ray, DVD and Digital as well as a 4K UHD Steelbook from 5th December 2022.