60 years since its release, this strange quasi-monster flick is a reminder of cinema before the IP wars began in earnest. 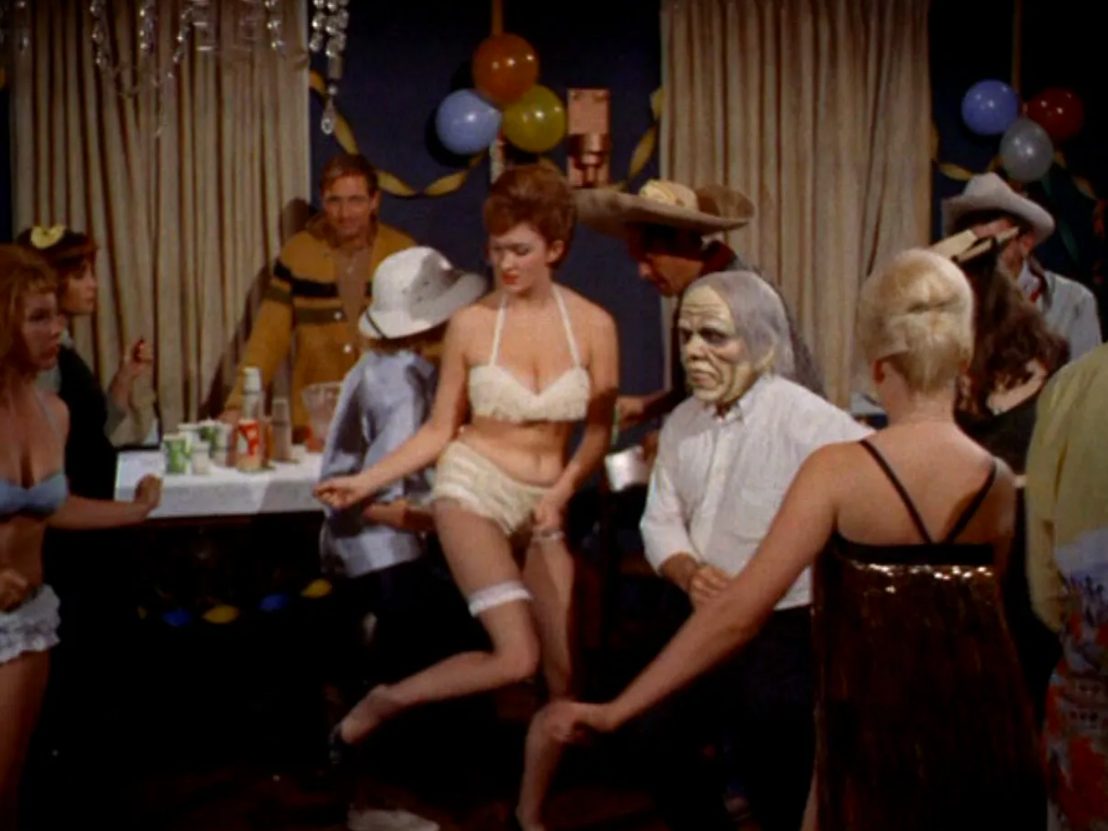 Sex has always underscored Universal’s most famous monster movies. For all that subtext, though, it wasn’t until the 1960s that Dracula, Frankenstein’s monster and the Wolf-Man would get to see a set of knockers that weren’t on the front door of a gothic mansion.

Released on the grindhouse circuit in 1962, House on Bare Mountain is a rambunctious nudie-cutie caper in which classic monsters mingle with Hollywood hardbodies. Laced with lowbrow comedy and featuring more flesh than a meat raffle, it was shot in ‘Nuderama’ and ‘Sexicolor’, nonsense terms with about as much substance as the skin flick’s plot.

The film unfolds at Granny Good’s School for Good Girls, a mountaintop finishing college where it’s not so much class as ass that’s in session. The closest anyone comes to ‘learning’ here is when a student is tasked with reading the dictionary – which she duly does, topless. Compared to the more sordid ‘roughies’ that would follow, though – and even some films of today – the whole thing remains relatively innocent, its tone more Benny Hill than The Big Snatch.

The school is presided over by Granny Good, played by fabled sexploitation producer Bob Cresse in dime-store drag. The headmistress parades her chest-blessed students around the grounds and for the full contemplation of the camera, with au naturel aerobics naturally leading to a long shower scene. That’s not all there is to the school, though. Granny Good is running an illegal hooch distillery in the basement with the help of the Wolf-Man. Worse still, she’s paying him a non-union wage. Not to worry; new student ‘Prudence’ is an undercover cop enrolled to expose the entire charade.

The plot is immaterial, as gossamer-thin as the girls’ outfits. Like many exploitation films, this is a picture whose come-ons promise more than it comes up with. “No monster ever had it so good!” and “You’ve never seen more… let us prove it to you!” were just two of the lines used to advertise the movie’s nudie union of woman and ghoul. Audiences got nothing of the sort.

Though the Wolf-Man gets some screen time down in the basement, the others are only briefly seen during the climactic costume party, Dracula gurning beneath an exaggerated widow’s peak and Frankenstein’s monster in a naff mask that doesn’t cover the actor’s neck. Which begs the question: is it even meant to be them?

According to the credits, yes. They’re billed as ‘Frankenstein’, ‘Dracula’ and ‘Wolfman’… but the fact that their actors are listed as Percy Frankenstein, Doris Dracula and Abe Greyhound suggests it’s best to take such nomenclature with a few buckets of salt. So why feature the characters anyway if they’re barely going to participate? 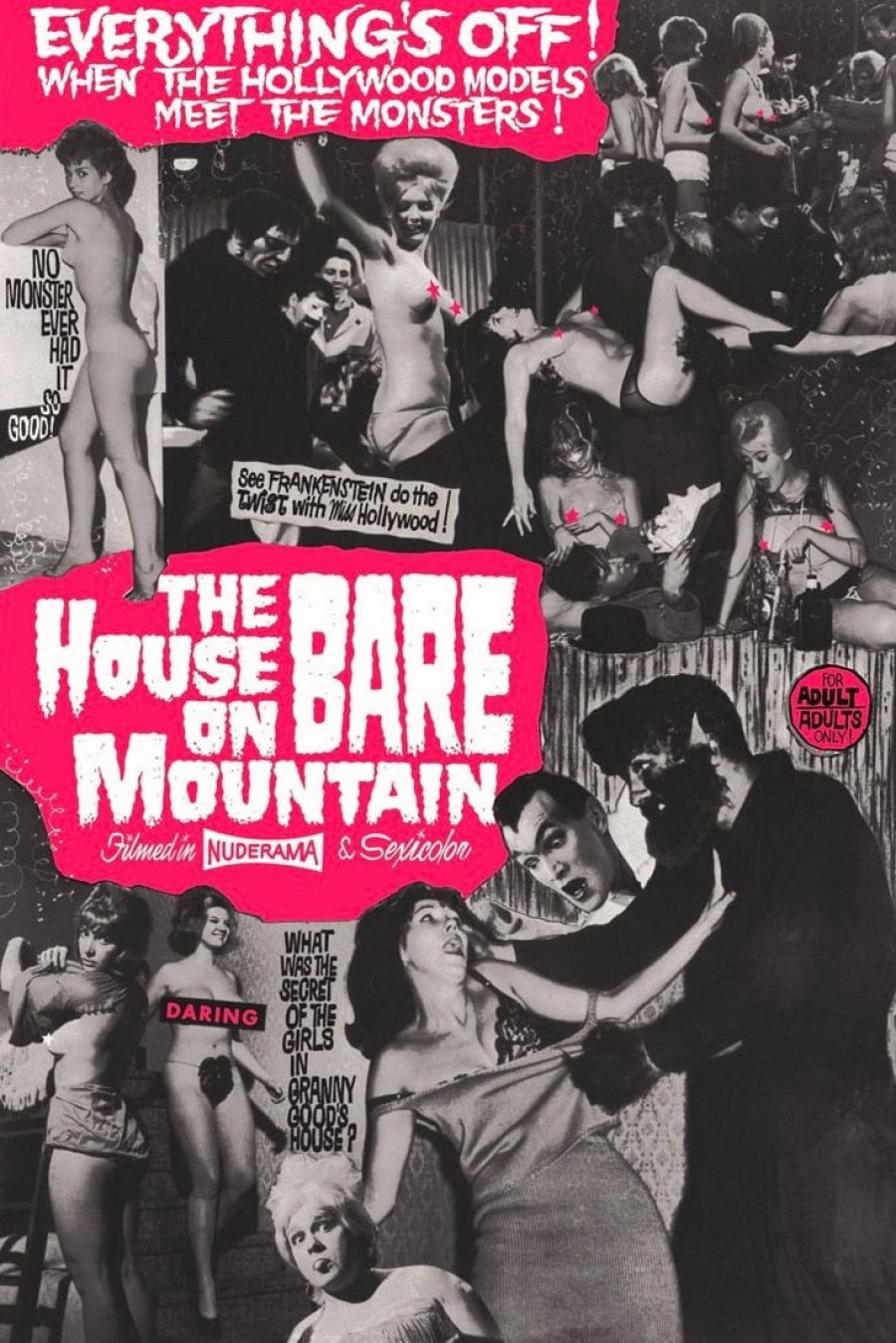 ‘Lovable’ Bob Cresse was a shrewd man. Shrewd in that he knew how to make a profit but also in that he’d stick a .38 in your mouth if you didn’t pay him. He would go on to produce the sensationalist 1966 travelogue film Mondo Bizarro and the 1969 Nazisploitation flick Love Camp 7, but Bare Mountain would be his first big hit.

Following their 1930s and 1940s heyday, Universal’s monsters were on their way to being forgotten. In the mid-1950s, television ensured they wouldn’t be. With Universal films in regular TV rotation, the Count and co were welcomed by a new generation. By the late 1950s, Universal horror’s second wave was reaching its peak. In the same year Bare Mountain was released to grindhouse theatres, Bobby Pickett released the immortal novelty song Monster Mash. For horndog horror fans of the early 1960s, then, few things could’ve been more exciting than taglines like, “Everything’s off! When the Hollywood models meet the monsters!”.

The monsters were more marketing tool than necessity of narrative. But as inconsequential as their presence here is, it’s not as incongruous as it might seem. By 1962, they had already co-starred in multiple mash-ups – including House of Frankenstein and House of Dracula – and each already had a history as a sexual deviant, even if they hadn’t been allowed to show it.

Christopher Lee’s Count was positively ravenous. He swans around the 1958 adaptation reeking of sex. His animalistic performance, though, is clearly one that the cast of Bare Mountain had never seen. Dracula looks uniquely bored during the film’s costume party, his only contribution coming when he pours a bottle of liquor into the punch. Lugosi made clear that the Count never drinks… wine, but here he’s clearly enamoured with vodka.

The eroticism of Frankenstein’s monster is defined more by the absence of love than its presence. In his 1931 debut, he lusts after his creator’s fiancée. In its sequel, 1935’s Bride of Frankenstein, he is immediately spurned by the woman literally engineered to be his mate. The monster perhaps comes closest to getting his end away in Bare Mountain, in which he does the twist with Miss Hollywood (so says the tagline anyway). Unfortunately the party gets interrupted by the cops before they get the chance to cop off.

Equally tragic is Lon Chaney Jr’s Larry Talbot, who first appeared in 1941’s The Wolf-Man, a broken man all too aware of what happens when the wolfbane blooms and the moon is full and bright. When Talbot transforms, man’s inner animal is let off its leash. His subsequent rampages bring harm to those closest to him, usually women.

The Wolf-Man has the biggest part to play in Bare Mountain, seemingly enslaved and set to work for 13 cents an hour. Despite his visage, here he’s more like Talbot the man than Talbot the beast, beaten down and emasculated by Granny Good. The film’s comedic highlight comes with the reveal that the man snooping around the school we’ve assumed to be a detective is actually the Wolf-Man’s union rep.

In the annals of cinema, too, these characters have scarcely had such miserable representation. Contrived as maximum titillation for minimum budget, House on Bare Mountain is cheap, cynical and about as arousing as that meat raffle from paragraph two. The film is little more than a hot flash on the sizzle reel of Universal’s most celebrated monsters but, 60 years on from its release, it remains their most salacious outing. It wasn’t the first time the trio had shared the screen, but they’d never been in a house of such ill-repute as this.