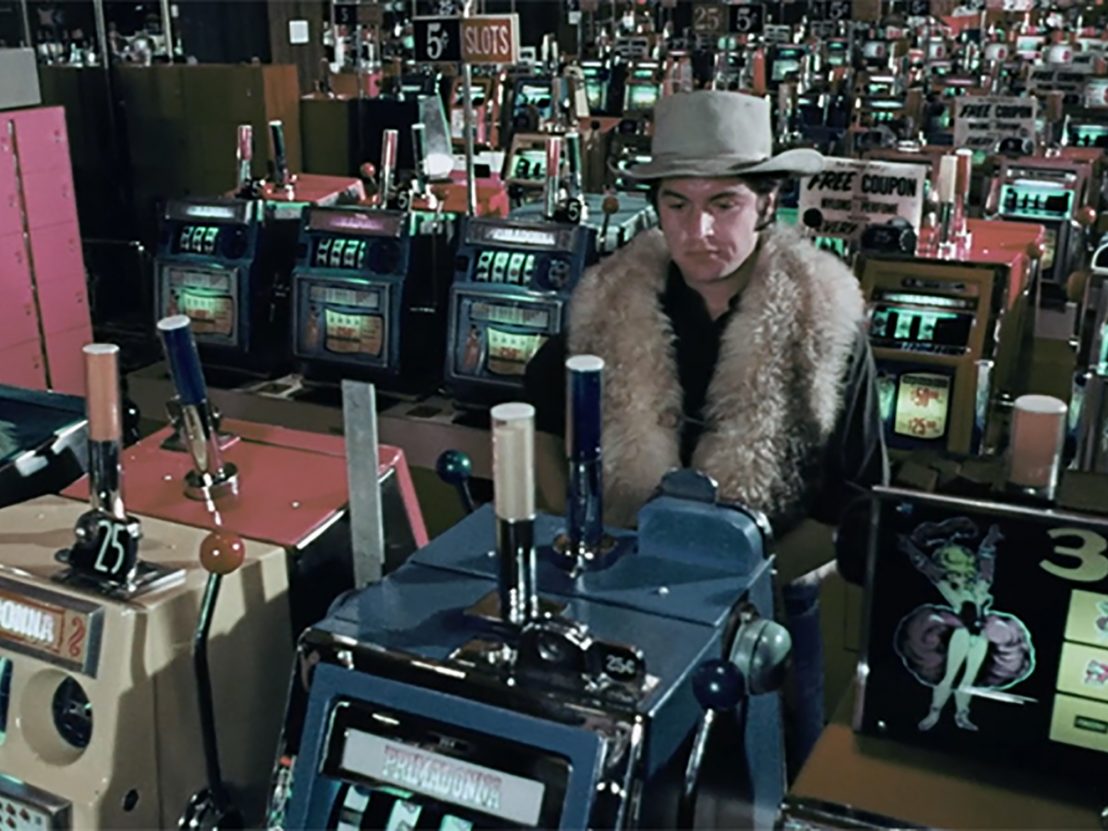 Right from its title, there is something weird going on in Fredric Hobbs’ Godmonster of Indian Flats. It is that word, godmonster. If it were just god, or just monster, the title might be more readily digestible – but the ungainly combination is harder to pin down. So is the creature to which they refer. The sheep rancher Eddie (Richard Marion) who, drunk late at night in his barn, first discovers its arrival, describes the experience in religious terms (“I looked up, and the sky was on fire – oh it was beautiful, like in the Bible – and then this little thing was born, screaming before my eyes, lit up so bright it blinded me to look at him”), like the celestial miracle of Jesus’ birth in the manger, only with Mary replaced by one of his ewes.

The scientist Dr Clemens (E. Kerrigan Prescott) prefers to rationalise the creature as a hybrid produced when a pregnant sheep inhaled organic gas issuing from beneath the earth. Townsfolk regard it as the ‘mining monster’ of local legend. And the mayor Charles Silverdale (Stuart Lancaster) just sees it as another indigenous asset, no less exploitable than the gold and silver deposits in the ground, and able to be captured and displayed as a freak exhibit (“the eighth wonder of the world”) for the much sought-after tourist’s (or viewer’s) dollar.

At first half-seen in its embryonic form, and then revealed as an ovine behemoth with a misshapen front leg, the godmonster also serves as a vibrant metaphor for Hobbs’ film itself, which is an equally hybrid genre mix of creature feature, revisionist western, and state-of-the-nation allegory, all sutured together in such a way that editor Richard Serly Brummer’s odd match cuts and disorienting visual segues forge provocative connections between otherwise disparate scenes. This creates the impression, possibly illusory, of a broader coherence linking all these ill-fitting storylines, and a method behind the madness.

Certainly it is difficult, at least at first, to synthesise the two very different seeming scenarios unfolding in parallel to engender Godmonster of Indian Flats. In the first, the anthropologist Dr Clemens struggles to keep the deformed embryo alive in his out-of-town laboratory while researching its origins in underground ecology and prehistoric fauna. Clemens is not quite a mad scientist, but certainly hubristic, pursuing the fame that he imagines his world-changing discovery will bring, while his assistant Mariposa (Karen Ingenthron) and Eddie are too in love with each other to care about much else.

In the second, outsider Mr. Chris Barnstable (Christopher Brooks) comes to town looking to buy up everyone’s leaseholds so that his employer, the multinational CEO Reich, can reopen the mines – but Mayor Silverdale, his slippery right-hand man Philip Maldove (Steven Kent Browne) and Sheriff Gordon (Robert Hirschfeld) have a different vision for the town, and will wage a vicious campaign of dirty tricks against Barnstable. 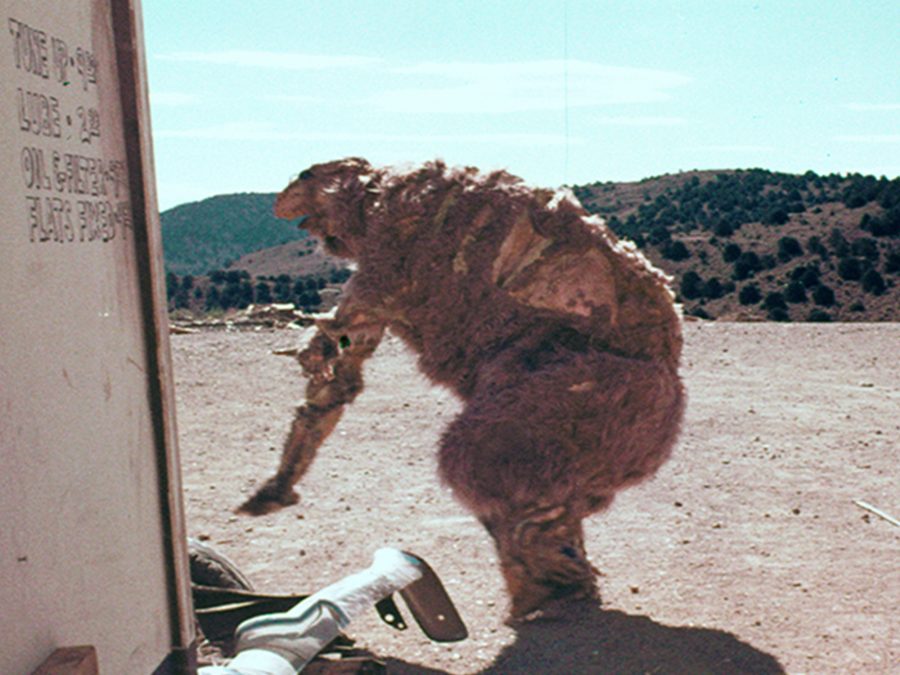 As the film’s title implies, what unifies these stories is place – although that too will prove a hybrid mix of fact and fiction. Most of Godmonster of Indian Flats is both shot and set in and around Virginia City, a very real (and expressly named) former silver-mining boomtown turned ‘old west’ tourist destination (the town’s real motto: “Step back in time”) in Storey County, Nevada, and located by Sugarloaf Mountain and the Comstock Lode (also duly namechecked in the film). Mayor Silverdale speaks of restoring the historic train line – and indeed a project to begin rebuilding it was indeed announced in 1972.

Dr Clemens appears to have been named for Virginia City’s most famous sometime resident, Samuel Langhorne Clemens, who adopted his better-known pen name Mark Twain while working as a reporter at the town’s newspaper in 1863. Yet even if at one point Eddie and Mariposa expressly visit the grave of Captain Edward Farris Storey, after whom Storey County was named, characters refer to the place as the fictitious Silverdale County instead, which is here reimagined as the mayor’s personal fiefdom.

“There’s people living in the Comstock nowadays kinda wish they could go back,” says Elbow Johnson (Terry Wills) near the film’s beginning, “Y’know, living in the past ain’t so bad, when you think about it.” Indeed ‘respected historian’ Mayor Silverdale, whose money has restored over half the town, is a sort-of MAGA proponent avant la lettre, obsessed with recreating Virginia City as it was in the nineteenth century, complete with saloons, brothels, staged gunfights – and his own horse-riding ‘vigilance committee’ as private muscle. Yet even as Silverdale and his friends cosplay their cowboy fantasies, his backward-looking ways do not stop him from having modern CCTV surveillance installed all over a town that he is surreptitiously turning into a police state.

As Silverdale recreates a partial history to match his own designs, Clemens digs even deeper and further back in the mines on a quest for the truth. For Godmonster of Indian Flats exposes not just the past as Silverdale idealises it, but also its darker side, hidden in the caves or buried in the garbage heap (locations which slyly mark the film’s ‘underground’ and ‘trash’ status). For as the title states, this monster emerges from an ‘Indian’ site, much as this area has a rich (if suppressed) Native history. Mariposa reveals that Captain Storey “was killed in an attack on Chief Winnemucca’s Paiute nation, after the Civil War ended” – and Eddie, relaying to Mariposa what he has heard from the brothel madame/clairvoyant Alta (Peggy Browne), tells of an ancient origin myth, as rooted in hybridity as the film itself, according to which local Indians emerged from “the marriage of a white wolf and a princess.”

Yet the Native-American population has been entirely expunged from Silverdale’s model town, but for a single life-sized statue forming part of the target at an outdoor shooting range. Virginia City is an all-white community, unwelcoming to otherness – and although nobody ever refers explicitly to the black skin that makes African-American Barnstable stand out as an alien presence, there are obvious, uncomfortable resonances in the trumped-up charges, baying mobs and hooded, hanging-happy posses that he must face. For, built over mines that, as Elbow Johnson puts it, “helped the Union pay for the War against South”, Silver City continues to be both an arena for racial conflict, and a microcosm of American history in all its public glory and concealed shame. Born partly of the earth, the Godmonster comes to symbolise an ugly, frightening return of the repressed, and of a more ancient brand of history that will not stay buried forever.

For a time, writer/director Hobbs was the owner of the real Virginia City’s Silver Dollar Hotel – and, five years after the release of Godmonster of Indian Flats, he co-wrote (with Warren Hinckle) and illustrated The Richest Place on Earth: The Story of Virginia City, and the Heyday of the Comstock Lode (1978). In other words, for Hobbs, this film was hitting close to home. Yet he was also a well-regarded fine artist with an interest in ecology, and here all these preoccupations intersect in a peculiar reimagining of living, local history as a parable for the violent values of the nation. “Time”, as Silverdale says more than once, “is the eternal judge of events” – and although Cobbs’ feature got very little theatrical play in its own day, time has proved very kind to it. Indeed, viewed now, its depiction of an America obsessed with nostalgic retrogression, and ever open to exploitation in all its forms, seems entirely prescient. It is also, in keeping with that title, one truly weird curio. 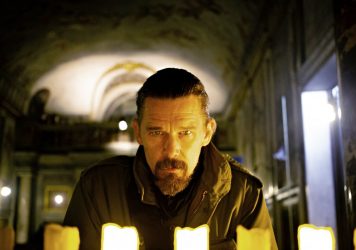 Ethan Hawke stars in this poetic and strange thriller about a military operative chasing multiple threads in Rome. 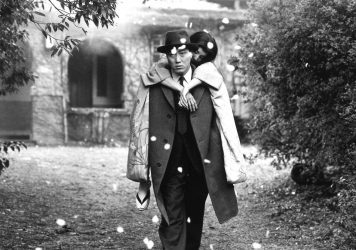 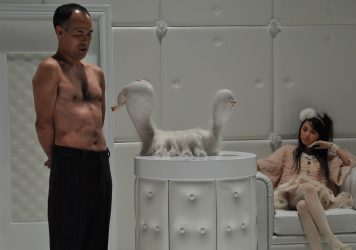 Discover the surreal provocations of this Japanese anthology comedy