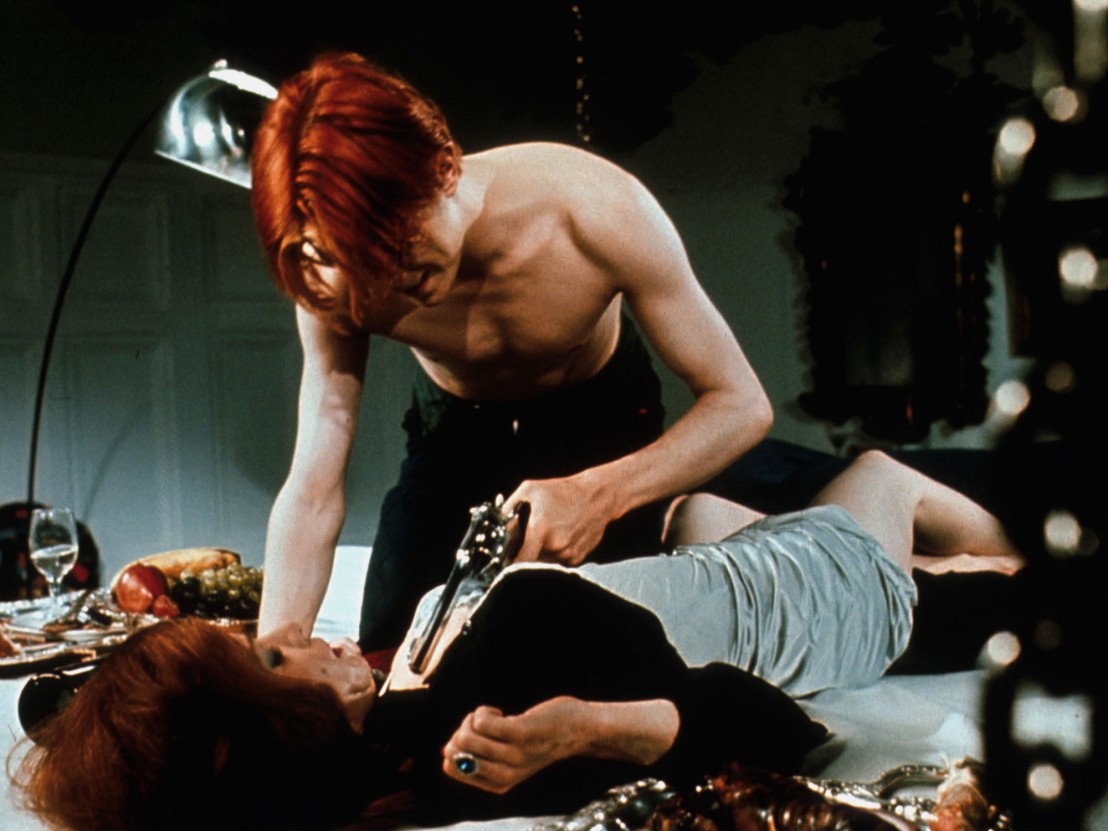 Tony Richmond has worked in film since the early 1960s, starting out from the very bottom as a clapper-board loader on From Russia With Love. He gradually worked his way up the ranks, becoming Nicolas Roeg’s assistant camera operator on John Schlesinger’s Far from the Madding Crowd from 1967, before becoming a cinematographer outright in the late sixties – one of his early solo efforts was with Jean-Luc Godard, on his intoxicating 1968 Rolling Stones film, Sympathy for the Devil.

Then, Richmond and Roeg became a team, working together on 1971’s Aussie chimera, Walkabout, 1973’s gothic classic, Don’t Look Now, and his experimental sci-fi feature, The Man Who Fell to Earth, in 1976. Richmond has worked as a cinematographer ever since, working on every type of movie you could imagine, from moody dramas like Sean Penn’s The Indian Runner, to glossy comedies like Legally Blonde and baroque horror films like Antonia Bird’s highly underrated Ravenous.

His hiring on The Man Who Fell to Earth was surprisingly quick and simple: “I got a call from Nic one day and he said, ‘listen, I’m in America. Go in to the British Lion offices on Monday, sort out a deal, and get out here by the end of the week.’ It was that quick.” 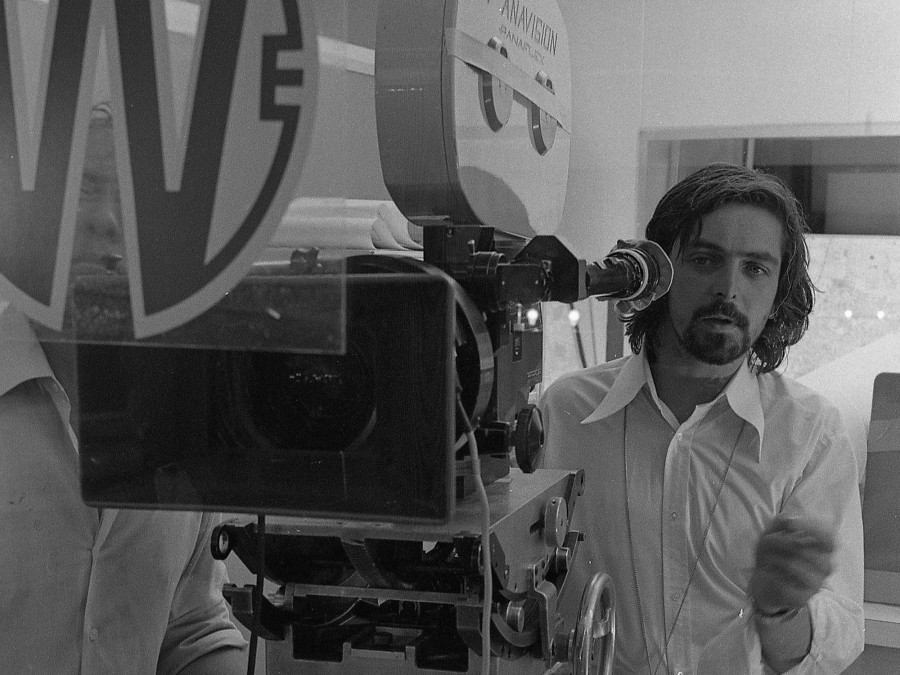 “Nic is obviously someone who initially worked as a cinematographer, so he would line the shots up and then leave them to me. But I knew Nic. I knew what he liked and what he didn’t like. I don’t have a style, most cinematographers, this isn’t to knock them in any way, have a style. I always think, let the story dictate the style. I think that’s very important because really the most important thing is the story, without a good script you can’t have a good movie.” 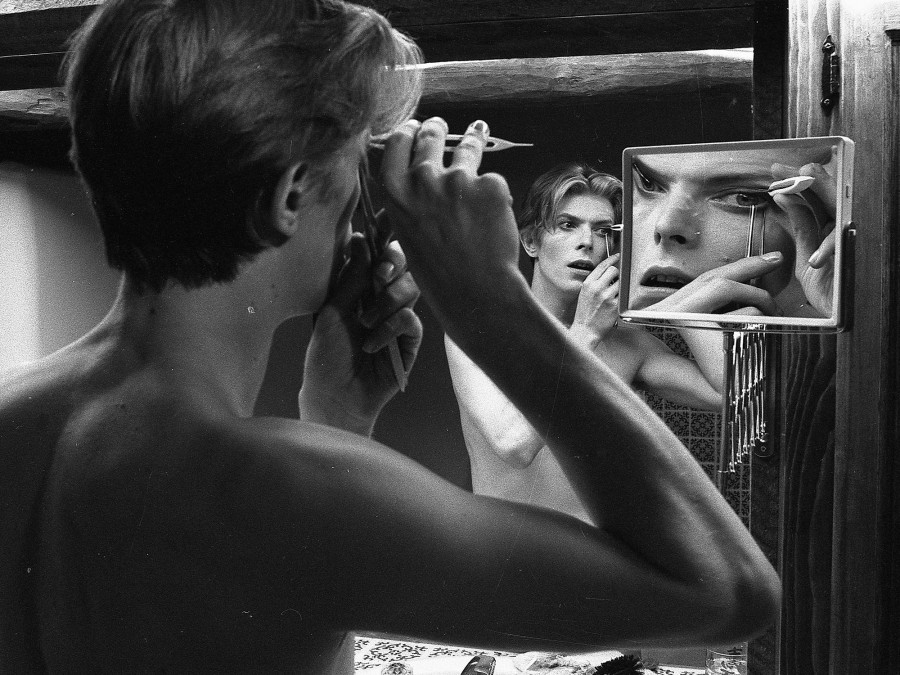 “In this shot, David is in his alien makeup. Everything we did on that movie would be very simple today. Obviously those prosthetics that David wears we bought them cheaply. No breasts, no testicles, no anus. They were all put on by our makeup department and it took hours. And also with the sort of stuff they were using, compared to all the stuff we have today, it would be so simple today. They would start work on David at about two o’ clock in the morning. My wife did the makeup, and she and her assistants would get a very high end dentist chair which they would work him up on the front, and then turn him over we’d get him ready in all those prosthetics like at ten in the morning, and we would shoot those as quickly as possible before they start to peel off in the heat.

“He was pretty strange because he’d just come off of a massive amount of drugs and alcohol. Apart from being very strange and weird, he had an assistant, I can’t remember what her name was who took care of him. Then you had Tony Mascia who was David’s bodyguard and who actually plays the chauffeur in the film. It was a strange shoot. And the limousine was Bowie’s own limousine. Bowie was wonderful, he was never late, he knew his lines he was always on time. Though he kept a lot to himself and he was very alien-like – what can I say?” 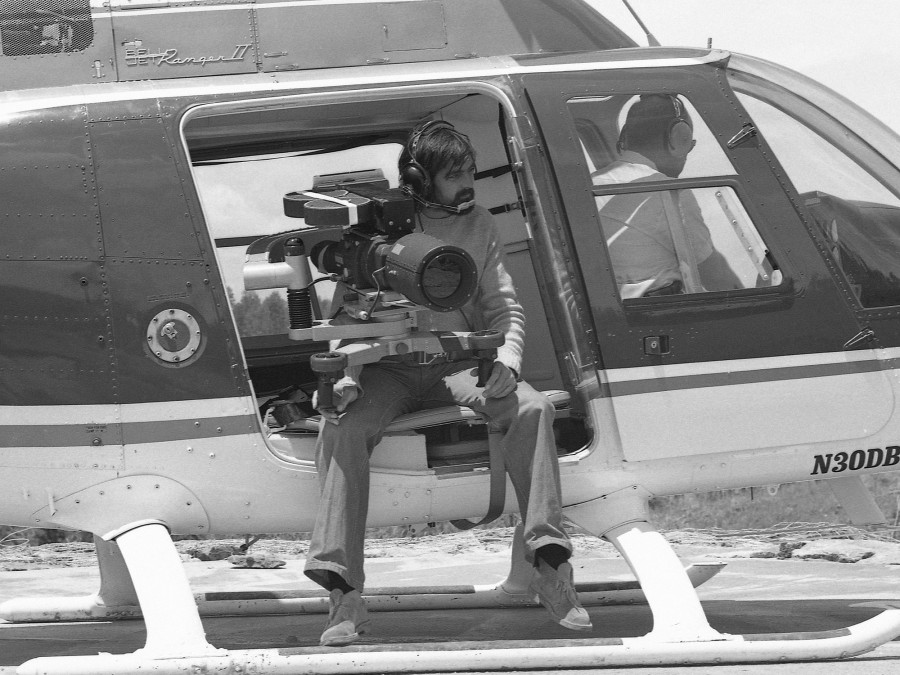 “I like to do the helicopter stuff rather than have a second unit do it. We did a 360 loop round the top of the mountains. Drones have really opened up these kinds of shots for everybody, because helicopters are really expensive. With the pilot and this and that, they cost a fortune. Here I was operating the camera and Nic was just sitting on the back of the helicopter. We were just talking to each other so we could see what we were doing.” 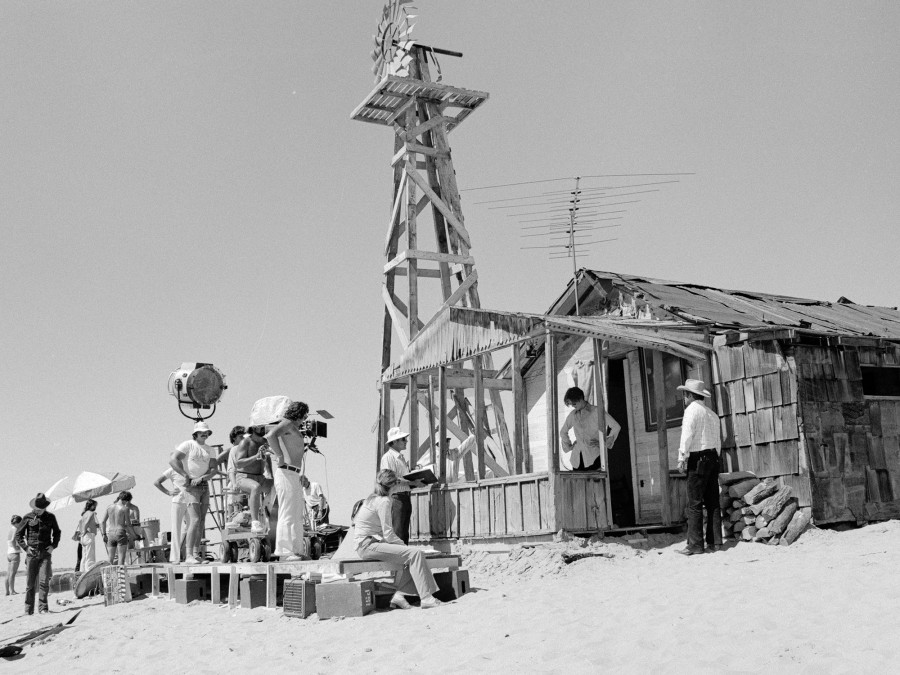 “I love this picture. This is from one of my favourite scenes. It’s just brilliant. It was an incredible location the whole crew was British so it was really fabulous for us all to be in New Mexico. It’s such an incredible place to shoot a movie because you go 15, 20 miles along the road and the landscape is completely different. I love that scene, it’s also got one of my favourite lines in the movie, when Rip Torn asks Bowie where is he from and Bowie points down at the ground in the distance and says, ‘Somewhere down there’.” 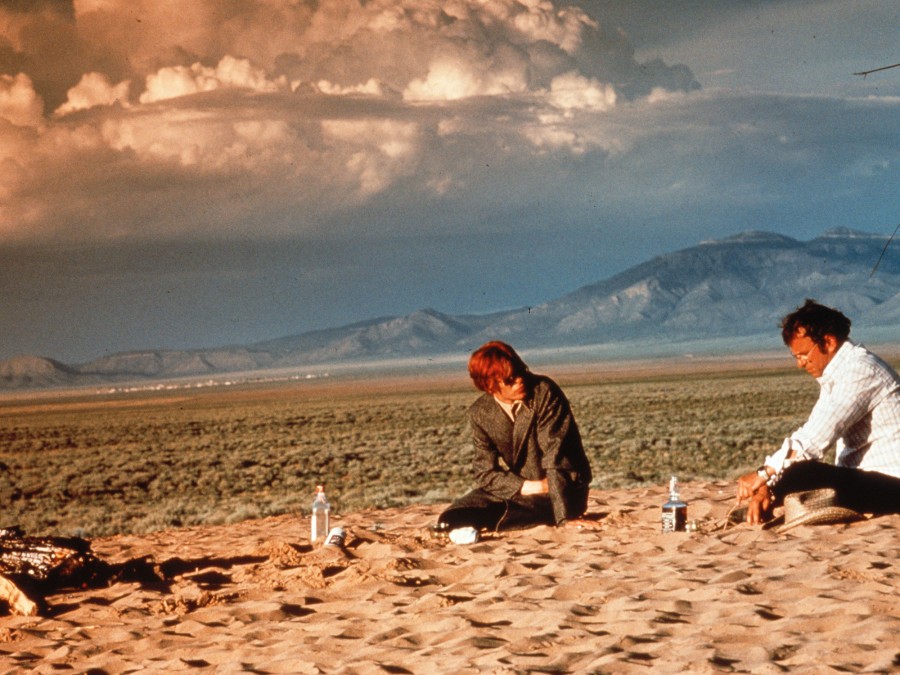 “There’s that huge cloud that’s. That cloud hung there all afternoon it was fantastic, we were really lucky. Probably most cinematographers would hate for me to say it but there really is a lot of luck involved. That cloud was just fantastic.” 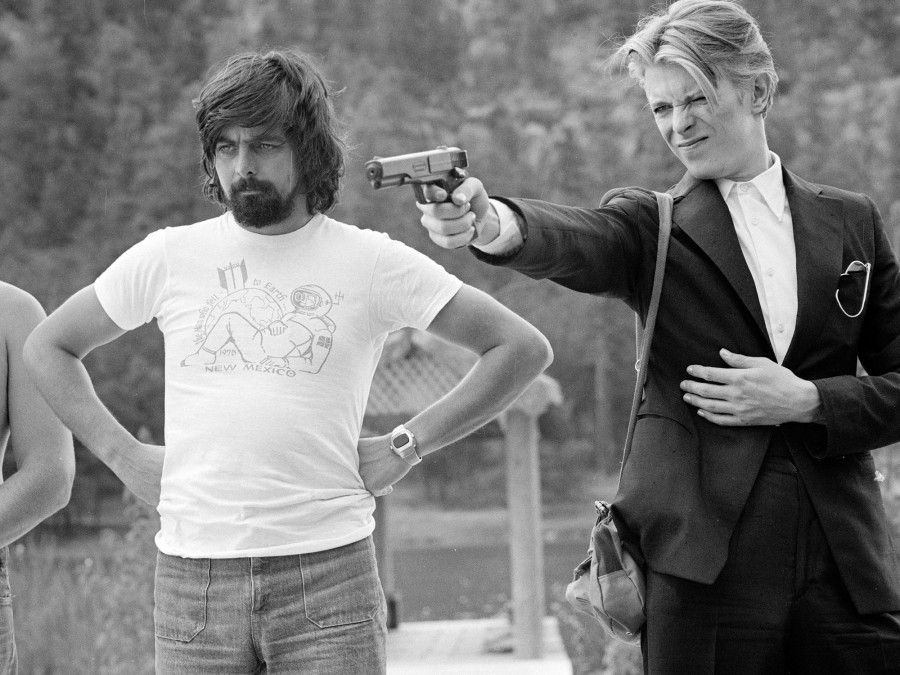 “Here, I think we were practising shooting the gun for what we call the ‘S&M’ scene. I don’t know why they call it that, I don’t think we called it that I think someone put a title on it. It’s quite a bizarre scene. When you’re on location on a movie, it’s really easy because when you’re shooting a movie in, say London or Los Angeles, you have an office and you prep and you talk and you go home at the end of the day. It’s so much better to shoot a movie on location, because everyone is always talking about the movie. Every cinematographer is different, but for me what I need to know is what the vision is.

“It was easy with Nic because we were friends. I’d known Nic for a long long time, as I started out as his assistant when he was a DoP. We used to hang out a lot and go to bars or have dinner and we were always talking about the movies. I knew what he wanted and that’s just the way it was. He used to get a general feeling of what he wanted, but he doesn’t do story boards. He might story board the odd sequence if it’s got special effects in it, but he didn’t do shot lists. Nic Roeg is probably the most organic director I’ve ever worked with, and one of the most incredible.”

The 4K restoration of The Man Who Fell to Earth opens in UK cinemas on 9 Sept and is then available to own from 24 Oct.

Meet the veteran producer of a Nicolas Roeg masterpiece

Jeremy Thomas invites us to rummage around his trinket-littered office.