Walking into the Christine Blundell Make Up Academy that’s tucked away just off Camden High Street in London, you’re instantly bombarded with giant wall placards signifying a long, rich and successful career in the film industry.

Across from the main reception, there’s a snapshot of Mike Leigh standing on a pitch and put golf course in Lea Valley, taken during the shooting of his 2008 film, Happy-Go-Lucky. Then tilt your head to the right and there’s a life-size mannequin with the face of Robert Downey, Jr from work on the Sherlock Holmes movies.
Christine Blundell has been a mainstay of the British film industry since the early ’90s, her first job as a make-up artist and hair stylist being on Leigh’s 1993 film, Life Is Sweet. She has worked with Leigh on numerous occasions since, and is currently researching his forthcoming feature, Peterloo.

Guy Ritchie, Danny Boyle, John Landis, Ken Loach and even James Bond are among her other collaborators, and we met her in the weeks ahead of the release of one of her most recent triumphs, Legend, starring Tom Hardy as both of the Kray brothers. Along side working on film sets, Blundell also dedicates time and resource to imparting her vast knowledge to students at the academy.

With special thanks to Hilary Kavanagh. 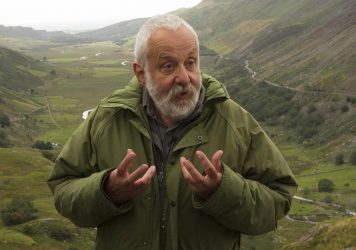 Mike Leigh announces the subject of his new film

The veteran British filmmaker looks set to get political with his latest project.