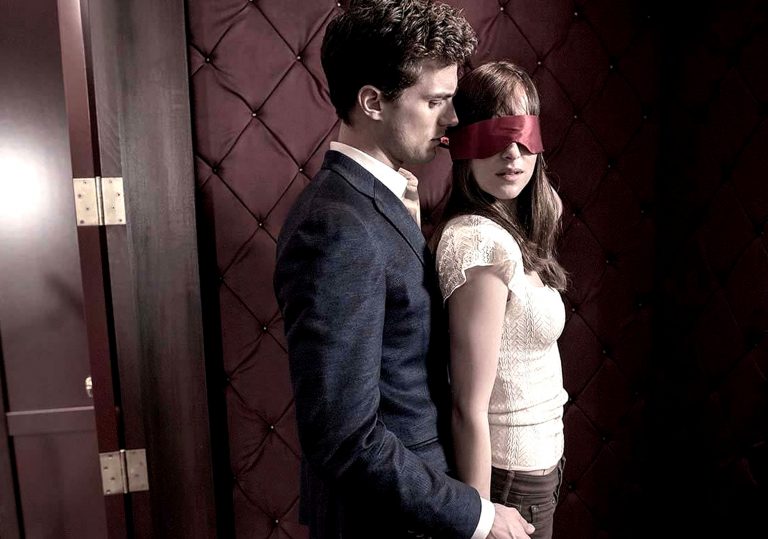 The first film ended on a major bombshell. Did we really need a sequel?

Hells no. A virtual shot-for-shot re-run of the original. And no-one needed that.

“Take off your panties. Right. Now.” That’s right – the kids are back together. After hard-cucking him at the breathtaking finale of 2015’s surprisingly radical Fifty Shades of Grey, Anastasia Steele (Dakota Johnson) returns looking for something a little more “vanilla” from her spank-happy billionaire admirer, Christian Grey (Jamie Dornan).

But it’s not long before she’s tip-toeing coquettishly around his luxuriant penthouse/man-cave, and peeking through the keyhole of the master’s own private sexual forbidden zone: the Red Room. Grey himself is, again, a comically over-jacked composite of the Milk Tray Man, Ron Jeremy and some kind of awful, braying narcissist who likes nothing more than to work a pummel-horse in front of a giant bay window. The big reveal in this film (and perhaps the only sign that Grey might have a tacit genetic connection to the human race) is that he has a Chronicles of Riddick poster on the wall of his childhood bedroom. This is the sort of high-calibre character shorthand you simply don’t get at film school.

But aside from the Riddick poster, this is gruelling, dull and not of this Earth. Any sequel worth its salt, particularly one that follows up a successful original, identifies the quality material from the original and then goes for broke in amping it up. Fifty Shades Darker is all but unidentifiable from the opening instalment, save the fact that it feels inferior in almost every way that matters. It takes trashy daytime soap at face value, and fixates on the type of petty relationship power plays which would make the casual observer want to reach for the nearest Katana blade and wooden spoon. It’s like watching two under-dressed, over-paid airheads send ‘I wuv wu’ messages over WhatsApp and then smile in smug self satisfaction. Then they meet and shower together.

Worthy of mention is the appalling music selections that are cranked up over the hanky-panky sequences. It’s hard to imagine that a group of creative, well-paid people sat in a darkened room, examined the footage and thought, yes, that’s the music we need playing over this scene. Another over-produced slow jam written for the school run. It’s like those old UHF tube televisions where, occasionally, the sound from another station interferes with the programme you’re watching. And there’s also a bit where Ana, once more Mr Grey’s lover, decides to come over, and on the soundtrack we hear Jeff Buckley’s ‘Lover, You Should’ve Come Over’. The highlight of the film, however, is undoubtedly the moment where Grey takes a helicopter to a business meeting in Portland and it looks like he’s bound for Jurassic Park.

The problem here is that the film too often feels like it’s making desperate and forthright attempts to connect to a demographic, a strategy it clearly prizes over tying to lift something dramatically workable from the garbage-fire that is EL James’ source material. So prevalent is the cinematic motif of a film character walking by a prominently placed brand name, or delivering a heartfelt monologue with a garish corporate logo dragging eyes away from the matter at hand, that it no longer seems worthy of critical deliberation.

Yet director James Foley is desperate to contextualise this wannabe sordid tale into the real, capitalist world. ‘This could be you,’ is what the film worryingly assures, over and over. And to help you along the path to suburban sexual ecstasy, why not take a glance at some of these fine products and services… These chrome love balls are for sale. Product placement is a fact of life, but stacking it up here serves to subdue any mythic quality this purportedly swirling, star-crossed love affair might have presented. And transforming the banal into the mythic is exactly what cinema is. So you do the math.

The first film ended on a major bombshell. Did we really need a sequel?

Hells no. A virtual shot-for-shot re-run of the original. And no-one needed that.