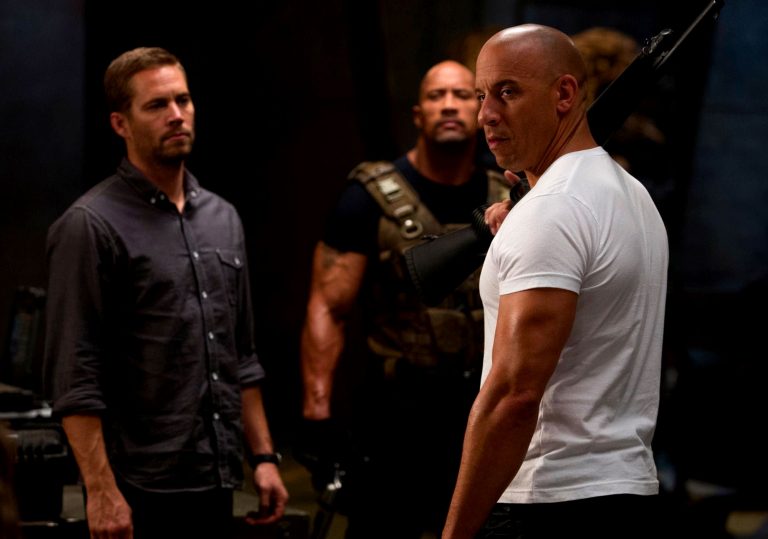 Will Dwayne Johnson and Vin Diesel move from flirting to lovemaking this time around?

The fun seems forced now and it’s not the guilty pleasure of Fast Five.

Insane and repetitive, but fans will lap (ahem) up this brainless, nitrate-injected sequel.

There are lessons to be learnt from this sixth instalment in the cars/quips/boobs franchise, such as, if a plot is getting bogged down in detail, whack a fight to spice things up.

With this movie, we can now confirm that, a) Gina Carano (star of Steven Soderbergh’s Haywire) is a great screen presence and that, b) screenwriter Chris Morgan believes a screenplay should have as many one-line zingers as there are minutes in the film (which are lots). We also shouldn’t forget that director Justin Lin is attempting to break Michael Bay’s record of continuous camera spinning.

Most important, however, is the world-changing realisation that Vin Diesel has apparently managed to harness the power of flight. In the most memorable sequence from this high-octane yet actually quite boring action epic, Diesel leaps jumps from a moving car across a bridge, tackling another character in mid-air before landing on another moving car. He does this all for “love”.

The addition of Dwayne Johnson into the bursting chassis of the Fast & Furious franchise gave a conked-out model some extra juice in the dumb, entertaining and extremely homoerotic Fast Five. Returning director Lin tries to pull off the same trick again but is so desperate to make the sixth film bigger, funnier and more explosive than the fifth, that the vehicle ends up spinning off the track.

Characters here are resurrected as readily and often as a WWE plotline – a brand with which the film seems to be involved in some mutual advertising push – the always-charismatic Johnson clotheslines a villain, uses his ‘guarandamtee’ catchphrase and even refers to the special move of fellow wrestler Chris Jericho.

But it’s not unreasonable to hope for a little consistency of tone. Don’t show Johnson shoot a vending machine in the same manner as Chief Wiggum changing the TV channel, or Diesel defying the laws of physics, or a 150mph pursuit through apparently deserted London streets, then expect audiences to even shrug when one character betrays another, or an effectively anonymous supporting player loses his equally forgettable loved one.

As for the plot, it’s less a narrative, more a loose framework within which to place as many pedal-to-the-metal fights, brawls and gags as possible. We open with a Canary Islands pursuit, revealed as Bryan’s (Walker) frantic effort to be on time for his first child’s birth before Dom (Diesel) intones, in one of humanity’s deepest ever voices, “Once you go through those doors, everything changes. Our old life is over”.

Except, of course, it isn’t. After a credit sequence which recaps the previous films (a tacit admission that this franchise has been on the road for too long), we travel to London where Agent Hobbes (Dwayne Johnson) has recruited Dom and his team to take on the terrorising Owen Shaw (a forgettable Luke Evans). There are beats about an all-powerful weapon, finding a car manufacturer, finding a gun, going undercover in a prison, etc. But Lin seems well aware that the film slows to a crawl when the plot mechanics kick in, and so tosses in wisecracks and punch-ups wherever possible to keep the momentum up.

That said, Chris Morgan’s screenplay doesn’t help – it’s effectively one long sequence of ‘And meanwhile, in…’ scenes, with a strangely high amount of recycled dialogue. In one Thameside showdown, Shaw explains his MO to Dom, but his motto isn’t even original – it’s the same as The Wire’s Omar. A ‘high point’ features the group listing engine components while another sequence sees Roman (Tyrese Gibson) losing a fight in front of dozens of witnesses then telling Han (Sung Kang), “No-one needs to know about this”. As McBain would say – that’s the joke.

Yet, weirdly, complaints like these are redundant: it’s easy to scoff at these films as idiotic acceleration-fests for the Friday night crowd, but if the preview audience with whom we saw the film is anything to go by, viewers sill enjoy these unwittingly camp, self-parodying, largely inexplicable scenes just as much as the intentionally funny or explosive moments.

You can quibble that it’s odd to make the ‘heroes’ of the film a career criminal and a Secret Service agent who almost beats an uncooperative suspect to death in his first scene. You can roll your eyes to the point of risking injury when Rita Ora makes a terrible cameo before a street race that’s somehow taking place on The Mall. You can feel anxiety that Gibson’s relative success as a comic device here means Universal will take the ill-advised move of green-lighting a Tyrese/Ludacris buddy comedy.

None of it matters.

For audiences who’ve signed up for the chase/stunt/joke/repeat formula of this franchise, Fast & Furious 6 does everything they ask. Fans want audacious set-pieces, a high laugh-count and a plot that steps on the gas until the chequered flag, and Fast & Furious 6 delivers at 150mph. And as a post-credits sequence reveals, there’s (at least) one more lap to go.

Will Dwayne Johnson and Vin Diesel move from flirting to lovemaking this time around?

The fun seems forced now and it’s not the guilty pleasure of Fast Five.

Insane and repetitive, but fans will lap (ahem) up this brainless, nitrate-injected sequel. 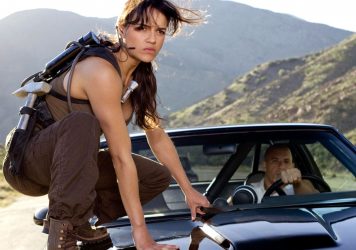 The biggest auto-based franchise around gets the high-spec reboot it probably didn’t deserve.