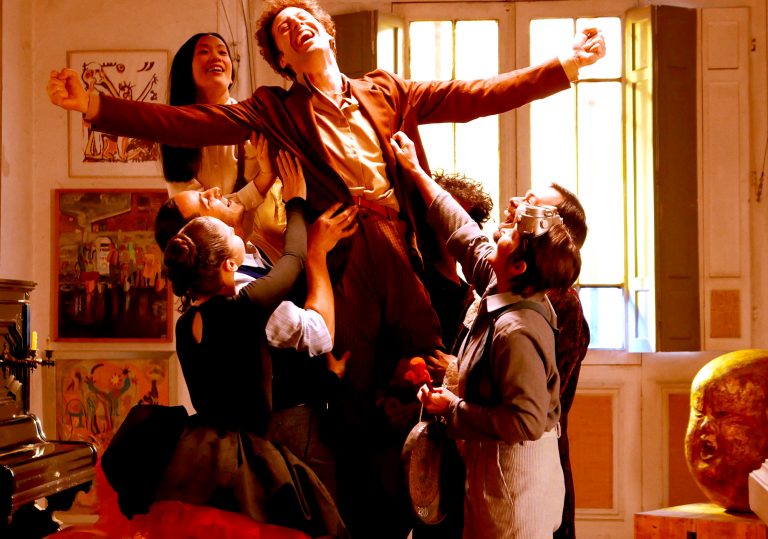 Jodorowsky is our main man!

Some fine touches of madness, but haven’t we seen this before?

An artist’s rite of passage, familial but also familiar.

“I thought you had changed, but you’re still the same man,” complains Sara (Pamela Flores), near the beginning of Alejandro Jodorowsky’s Endless Poetry, to her unloving, bullying husband Jaime (Brontis Jodorowsky). On one level Sara’s words serve as a reflexive joke. For, like every single film in Jodorowsky’s oeuvre (since he debuted in 1968 with Fando y Lis), this latest feature concerns the individual quest for identity, meaning and transcendence in a world of vanity and illusion.

After decades of experimenting in a variety of genres (from the western in El Topo to the slasher in Santa Sangre), and then a 23-year hiatus from filmmaking, Jodorowsky returned in 2013 with The Dance of Reality. As an autobiographical work tracing the director’s childhood in Tocopilla, Chile, it ostensibly marked a change in the man’s output, but in fact displayed the same spirit of metaphysical questing found in all his previous works, as both the young Jodorowsky and his father Jaime are shown undergoing transformative journeys. Plus ça change…

Endless Poetry is both sequel and sort-of remake to The Dance of Reality, as it shows the young Jodorowsky undergoing further formative rites of passage in Santiago – rites that, apparently, never really end, but are merely lent arbitrary calibration by closing credits. If it picks up exactly where The Dance of Reality left off, with Jodorowsky departing in a boat for a new future, that is also more or less where it ends: another boat, another future, another stage in the same journey.

In this circular portrait of the artist as a young man, Jodorowsky’s principal theme is the permanence of impermanence. Despite his past metamorphosis, Jaime has returned to being a petty patriarch, running his new little shop once more like a fascist regime, and hoping that ‘Alejandrito’ will become a doctor rather than a ‘faggot’ poet. Again Sara is a font of nurturing compassion, her separateness from the world’s cruelties and vices marked by the way that she sings her every line in a soprano voice.

In a fit of rebellious anger, Alejandro (Jodorowsky’s son, Adan) literally chops down his family tree in the back garden. It is a vain attempt to sever domestic ties and branch out on his own – but he can never quite shake his roots, and with his strivings for independence and change come certain fixed continuities. Accordingly his first lover, the poetess Stella Diáz Varín, is portrayed by the selfsame actress who plays his mother, while his father is played by another of his sons – and Alejandro’s failure, even now, to leave behind his parents’ influence is suggested by the very existence of two feature films devoted to their memory.

Jodorowsky appears as himself again, ghosting his younger incarnation as a guardian angel from the future, while also using this lm to stage his own psychological flotsam – in a Brechtian world where the Santiago of the past is evoked by an overtly set-dressed present, and black-clothed stagehands visibly pass props to the players. In this theatre of the absurd, though, the younger Alejandro proves so supine and unengaging a character that a different kind of endlessness quickly asserts itself.

Jodorowsky is our main man!

Some fine touches of madness, but haven’t we seen this before?

An artist’s rite of passage, familial but also familiar.