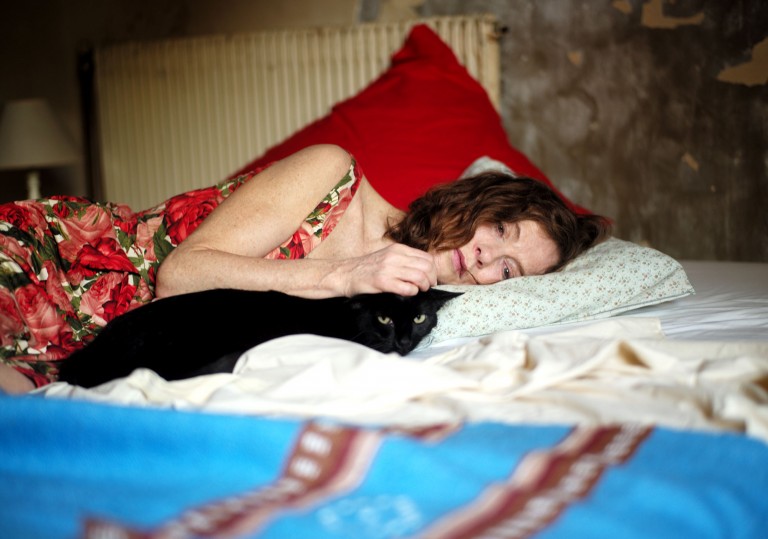 As a writer and director, MH-L is the best of the best. No question.

If you like Isabelle Huppert, you might want to block out a week in the diary for this one.

Confirmation, were it needed, that Mia Hansen-Løve is one of the greatest filmmakers currently plying her trade on this green Earth. Things to Come is her exquisite follow-up to her 2015 masterpiece, Eden. It suggests that making movies comes as easy to her as speaking or breathing or reciting a line of verse. It’s a reflex action. Her latest wayward opus is, somewhat surprisingly, a film about cats. Maybe not directly or even intentionally, but its story involves an overweight black cat named Pandora who is the philosophical nucleus of this rustic rumination on what it means to truly experience freedom in our everyday lives.

Isabelle Huppert is at her most Isabelle Hupperty (in a good way!) as Nathalie Chazeaux, a doting mother, a successful and well-liked philosophy prof, wife to an intellectual equal and daughter to an ex-model who cherishes her company. She has money, a holiday home and there are always fresh-cut flowers on the table. As with Hansen-Løve’s earlier works, Father of My Children and Goodbye, First Love, this one takes a dramatic U-turn at the mid-point and all these social givens are quickly removed from the equation.

A lesser director may have used this as an opportunity to turn the screws and ride the teary waves of a prolonged meltdown. But not this one. Nathalie remains calm and accepting of life’s unavoidable road bumps. She chooses not to draw on her vast repository of philosophical wisdom in an attempt to rationalise these natural disasters. And it’s not that she couldn’t, it’s that she knows it would offer her no real consolation. Suddenly she has gone from having everything and being tightly locked into a system, to having nothing and being entirely free.

Pandora the cat represents her life after the fall. She can now live by her own timetable. She can wander in the wilds and take in the elements. When Nathalie heads on a trip to visit one of her prize students, Fabien (Roman Kolinka), in a dilapidated farmhouse down Grenoble way, she’s more concerned with the wellbeing of her furry travel companion than she is about the sweetly juvenile musings of her protégé. When she accepts that this newfound freedom has its downsides, particularly during late middle-age, the cat becomes a physical symbol of her quandary and the source of much upset.

The magic of Hansen-Løve’s cinema is that she doesn’t so much tell stories as she carefully collates details and understands how they are able to enhance one another when placed together. A scene in which Nathalie’s husband admits to his extra-marital hanky panky is entirely stripped of melodrama. Savage blows are dealt with a featherlight sense of diplomacy. It would almost be funny if it weren’t so sad. Yet a few scenes later, when Nathalie comes home to find a conciliatory bouquet on the coffee table – a weak attempt at an unspoken apology, or an affirmation that this spilt is believed to be no biggie – she explodes in a rage. Suddenly, the showdown receives its belated aftermath.

Nothing here is forced, and the title offers a no-nonsense reminder that everything Nathalie experiences, we will likely look forward to ourselves. The sadness at the core of the film is her realisation that she has no answers, and that perhaps there are no answers. The film’s relationship to philosophy, the belief that we can ascribe meaning to action or that we can ever hope to understand the inner workings of another person, is suspect, bordering on the critical. Hansen-Løve never feels the need to state this – she allows the images do all the talking. A recitation from Blaise Pascal’s ‘Pensées’ at a funeral highlights Nathalie’s discernment and intellect more than it is able to define the tragedy of death. Perhaps the writer/director isn’t against philosophy as a purely poetic or academic form, but she seems wary of its value in the the modern world.

At times the film is so cautious, so defiantly delicate, that the meandering loses a sense purpose. There’s a sense that too much effort is being expended on making sure that anything even bordering on the overly-suggestive or symbolic doesn’t make it to the screen. Hansen-Løve takes the material to the very edge, but chooses not to push it over. Filmmakers set their own standards, and astonishing though this is, it doesn’t quite reach the heights of her formative works. It ends up offering the cute suggestion that the cycle of parenthood is what saves us from the tedium of liberty.

The film opens on a visitation to a hilltop graveyard and ends on the birth of a baby, suggesting that while some may see life as merely the drawn-out process of dying, others might choose to view it as a chance to keep being reborn. Chaos is cute on the page and around the dinner table, but best leave that to the cats.

As a writer and director, MH-L is the best of the best. No question.

If you like Isabelle Huppert, you might want to block out a week in the diary for this one.