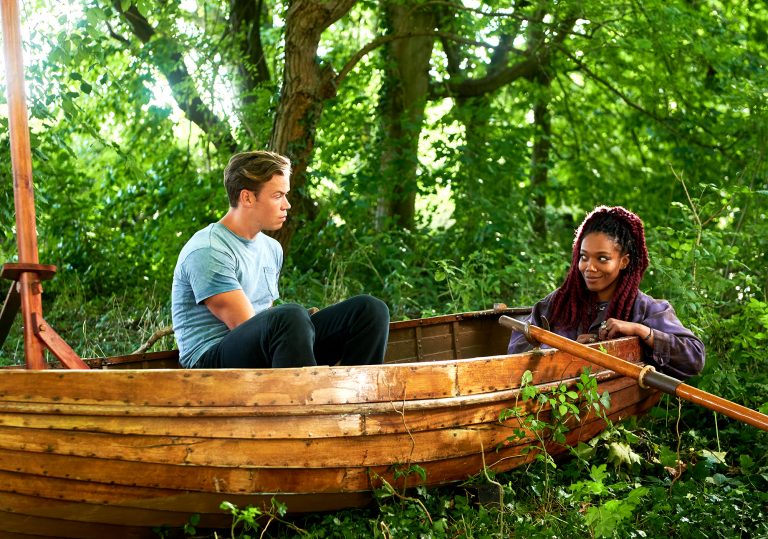 A heist that’s also a musical? Sign us up.

Sadly, this is time that you cannot get back.

Cracking cast but a tough watch due to its awkward genre fusion.

When we think about heist films, we conjur up images of fast car chases and men who think they are super hard. Scrap all that – apparently there’s a new way to do it. The Score, from writer and director Malachi Smyth, is a pandemic-made thriller that attempts to express its own meaning by disposing of the notion of
palm-sweating tension and opts instead for some Mamma Mia-esque outbursts of folk rock to ease its protagonists into its storyline.

The film stars Brit character stalwarts Will Poulter and Johnny Flynn as a pair of un-smooth criminals playing the waiting game at a roadside café. Their time is spent mixing hard-boiled bants with a number of musical interludes courtesy of Flynn himself, which lends the film a more theatrical than cinematic quality.

Proceedings open with a musical number performed by all of the main cast, which sets both the tone and the scene. Troy (Poulter) discovers a big bag of cash that was stashed away by his older brother who we later find out is incarcerated. Mike (Flynn) hands over a gun to his wife at the caravan park where they live. Meanwhile Gloria (Naomi Ackie) is just nearing the end of a shift at the café.

Given Flynn a chance to flex his musical muscles does feel like an interesting way to give this hard-worn material a fresh sheen – he’s a confident singer and performer. Yet Poulter and Ackie seem less comfortable in this context, and the eccentric songs end up dissolving any rawness the pair might have brought to their characters.

Much of the film occurs within a single location, and we see Mike and Troy waiting to pull off their deal. During this process, we also see a blossoming romance occurring between Troy and Gloria. Yet their romantic repartee comes across like flirty DMs on a dating app.

Gloria at one point says to Troy, “Tough guy?” to which Troy replies with, “me thinks”. The playful, catty dialogue serves to disconnect the plot and characters from any kind of believable tone, not to mention a sense that we should really care for these people.

This stripped back tale does generate a bit of tension in leaving various key details blank: how much money is in the bag?; Who is it for?; What is their personal relationship? Yet in the end, most of these intriguing questions are ignored, and if they are dealt with, the answers are hardly mind-blowing.

There’s a sense that Smyth’s writing only works in fits and starts, and all the fractured elements don’t ever quite fit together. Flynn’s musical contributions, too, are all lacking in lyric department, and where they might have made for a decent stand-alone solo LP, it’s hard to know what wider function they play in the film.

A heist that’s also a musical? Sign us up.

Sadly, this is time that you cannot get back.

Cracking cast but a tough watch due to its awkward genre fusion.