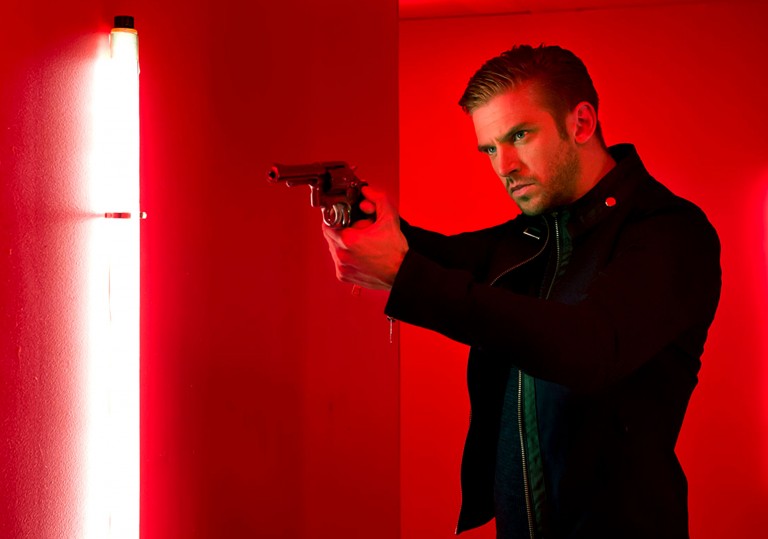 Adam Wingard’s previous seemed to prove he was more than just a genre journeyman.

A set-up rich with metaphorical potential is squandered.

No reasons offered to take another bite of this bitter cherry.

If at all inclined to catch director Adam Wingard’s follow-up to his mildly revisionist 2011 horror yarn, You’re Next, you’d do well to fold up this magazine and tuck it away for later reading, as The Guest is one of those movies whose entire plot has, what the kids are calling, “spoiler potential”. Yet, if you’re naming your film The Guest, you’re basically, if not fully disclosing, then certainly wailing through a bull-horn, the fact that there will be more than meets the eye to this eponymous visitor.

Downton Abbey alumnus Dan Stevens uses this opportunity to prove that he’s more than a fancy-boy fop, adopting a convincing Southern American drawl and going full Gosling for his lead role as David, a recently-discharged Marine who has opted to visit the desolate family of a brother-in-arms who bit the bullet on the field of combat. Though father, mother, brother and sister have never heard of David, his Stepfordesque politesse and ultra-diplomatic manner — and not to mention he possesses the so-what buffness of an off-duty Chippendale — quickly earn him a place in the family nest. In the minds of the audience, though, it couldn’t be more flagrantly overt that he’s an odious turd with an ulterior motive.

Alas, Pasolini’s Theroem this ain’t, as Wingard appears to want nothing more from his film than a couple of passable jump-scares and to have Stevens administer a bunch of evil glances towards his co-stars. The action is haphazardly formulated so that for the first half of the film you’re simply waiting for the ball to drop, and when it does, it transpires that Wingard has dispensed with the metaphors entirely to give himself a free pass to orchestrate an arm-flailing glitter-bomb finale.

The essential problem with the film is that, on one hand, Wingard and screenwriter Simon Barrett are attempting to cultivate a mystery in order to maintain interest in the narrative, yet on the other, they congest the screen with thin characters whose grim fate is virtually a fait accompli from the first moment we set eyes upon them.

Its depiction of a working class family in the throws of depression could barely be more obvious, from the young son being bullied at school, to the militarist, overbearing and booze-dependent patriarch and his sad-eyed wife who, in the end, has very little to do other than be sad-eyed. The daughter, Anna, played by Maika Monroe, is the film’s sole point of emotional entry, though by the final chapters, even she is reduced to a pummelled rag-doll with the stock task of running, cowering and screaming.

Maybe the The Guest is intended as a hearty exploration of the grief that comes from losing a loved-one in war and the ghosts which inevitably emanate from the fall-out? Or it could be a sly satire on smalltown, working-class America and its collective, unspoken yen for violence and conflict? Or maybe a commentary on experimental military technology and the way it is secretly deployed in public? It would be nice to think that such depths were intentional, but Wingard’s case for The Guest being a hollow, schematic genre flick is far too compelling.

Adam Wingard’s previous seemed to prove he was more than just a genre journeyman.

A set-up rich with metaphorical potential is squandered.

No reasons offered to take another bite of this bitter cherry. 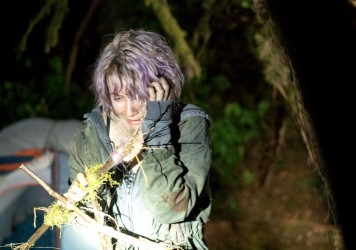