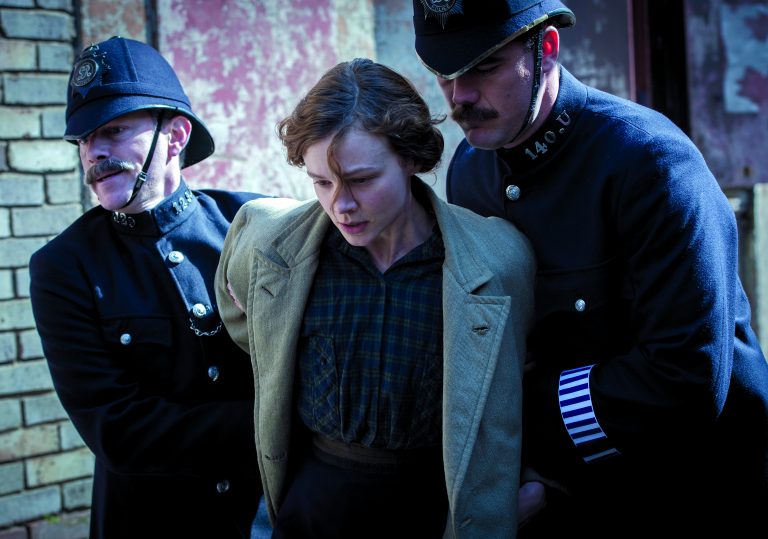 ‘The time is now’ scream the posters.

Reels a familiar yarn, but unlike its subjects, is wholly risk averse.

This would’ve made for a great TV serial.

For better and for worse, Sarah Gavron’s new film, Suffragette, is concerned with an anticlimax. On a literal, formal level, it presents history as agonisingly piecemeal, a series of loosely interconnected incidents which are undertaken at a moment’s notice and with only a cursory discussion as to their intentions and targets.

It’s anticlimactic, too, in that here is a film concerning arguably the most eminent congregation of female activists fighting for acceptance and equality in modern history, and we know with the gift of hindsight that the spoils at the end of their violent campaign are meagre at best. Certainly, change was impacted as a result of their heavy sacrifice, but the shady spectre of ingrained belief – that men and women are two separate species and should be treated as such – remains prevalent and, in some locales, unchallenged.

Screenwriter Abi Morgan has been saddled with the unenviable task of capturing and framing a victory – Pyrrhic or otherwise – to meet the demands of escapist movie audiences who require cause for celebration. Because we wouldn’t be sat here if the whole thing was a righteous blow-out. The title of the film is conspicuously singular, referring to Carey Mulligan’s Maud, a taciturn laundress with a glint in her eye, a Vera Drake cock-er-nee drawl, and a nice line in tilted navy berets. She is our conduit into Edwardian-era, proto-feminist empowerment, her innate sense of cheery subservience having been chipped away over the years by an ineffectual husband (Ben Whishaw), a lecherous boss (Geoff Bell) and tyrannical copper (Brendan Gleeson).

At its best, Suffragette is a film about taking heed of the benefits of democracy, even when that democracy isn’t working for you. It critiques politicians – harshly, but fairly – in their inability to see the problems that sit right at the end of their bulbous noses. You could switch out the cause of universal female suffrage with any hot button political concern, and the film would serve it amply. That’s both its great success and its great failing – in making this struggle feel generic, it betrays the bloody defiance in which these women were regularly engaging, as well as the fact that theirs was a specifically defined entitlement.

The problem with this movie, and with many movies like it, is a desperation to make it known that the people we’re watching are great, they are heroes and they changed the world as we know it. This is often attained by stating the fact point blank, though here it’s achieved by the strict dividing lines of all female characters being good and all male characters being bad. There are no Suffragettes in Suffragette who found fault in the methods of the illusive Emmeline Pankhurst (a gussied-up cameo by Meryl Streep), who assured that years of passive struggle had been useless and that civil disobedience was the order of the day. Only Marie-Anne Duff’s Violet Cambridge is shown as optioning out of necessary activities, though only due to a fear of returning to prison, nothing that might infer internal antagonisms.

It would seem futile to complain that this film wasn’t more like Steve McQueen’s 2008 debut feature, Hunger, that is to say an exemplary and nuanced depiction of the point where protest mutates into self-sacrifice. While their thematic aims are similar, the stylistic aims couldn’t be more different. The former involves gruelling lassitude, while the latter is packed with incident. The most effective sequences in Suffragette are those in which Gavron chronicles the process of horrors that befell these women, such as being force-fed in prison. But this can’t be that film. It’s not built that way. That’s not its intention.

A few horrific connective fudges to make sure that certain characters are all in the same place at the same time sours the experience during a rushed final stretch. It’s a strange positive, though, that you’re left with the bittersweet feeling that these are people you want to spend more time with, to learn more about, that the film cuts you off short. Mulligan’s indomitable everywoman is a humdrum character imbued with life and warmth via the actor’s apparent refusal to succumb to garish melodrama. She makes certain itʼs a tougher film than expected, with regular bouts of suffering seldom lingered over.

The film’s most moving moment, however, is a climactic hard-cut from a staged funeral procession for a fallen conscript to newsreel footage of the real event. It’s not just the twisting phalanx of women in wide-brimmed hats soberly march through the streets, using the body of a martyr as a political bargaining chip. It’s that film is itself a political tool, and that Gavron and Morgan at least attempt to wield it in the same confrontational manner as their forebears.

‘The time is now’ scream the posters.

Reels a familiar yarn, but unlike its subjects, is wholly risk averse.

This would’ve made for a great TV serial.