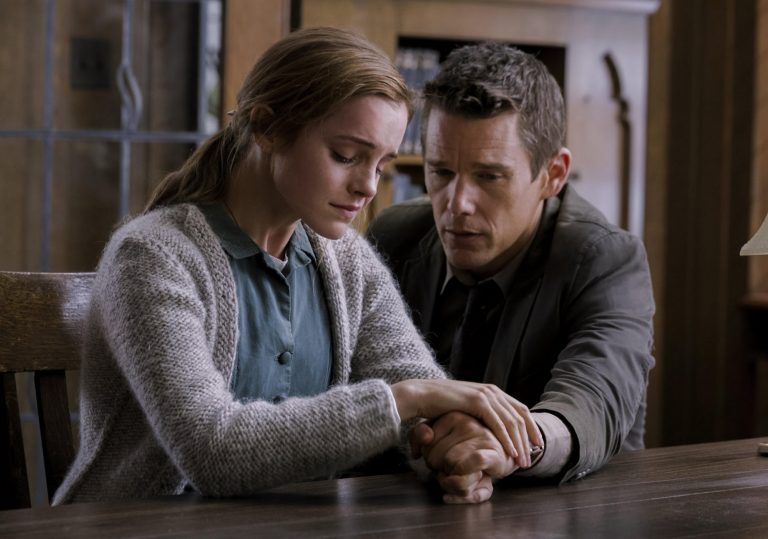 Is Emma Watson having her House at the End of the Street moment?

Some effective chills but certain aspects of the story will raise eyebrows.

Emma Watson falls foul of a satanic cult in this pulpy potboiler from Alejandro Amenábar.

The curious, often confounding relationship between the crucifix and the gun – those most enduring of American symbols – is superficially explored in this silly but entertaining psychological thriller from writer/director Alejandro Amenábar (The Others).

Set in smalltown Minnesota circa 1990, Regression concerns a God-fearing community’s obsession with a mysterious child abuse case centred around 17-year-old Angela Gray (an underused Emma Watson) and a sect of devil worshippers. Her father (David Dencik) has confessed to the crime, but his inability to accurately recall the events in question muddies proceedings. So what’s really to blame here? A sick patriarch suffering from amnesia? Satanism? Or is it collective hysteria? Leading the investigation are detective Bruce Kenner (Ethan Hawke) and psychologist Kenneth Raines (David Thewlis), who practices regressive hypnosis and preaches pragmatism. Which is easier said than done when religion and science collide.

From the outset it’s clear that Amenábar isn’t actually all that interested in the hows and whys of satanic ritual abuse, a dangerous moral panic which swept across the US throughout the ’80s and ’90s. By definition, SRA was deeply controversial, with the shocking nature of the allegations, testimonies and evidence often clouding the judgement of the police officers and therapists directly involved, as well as the wider public who inevitably became invested in high-profile cases. Of course, as with any sensationalised cultural phenomenon, the media had its part to play, and perhaps the biggest trick that Regression misses is not providing social commentary on the 24/7 news media’s propagation of conspiracy theories and pop psychology over common sense and scientific research.

Without giving too much away, there’s also a major issue with the timing and manner in which victim blaming is introduced to the story. What Amenábar’s twisty procedural lacks in logic, tact and fresh ideas, however, it makes up for in genuine suspense, though more often than not this is manipulated via an assortment of stock genre motifs – black cats, twinkly music boxes, creaking barn doors, cloaked apparitions, silent callers. For a less trashy, more authentically chilling experience, seek out Ti West’s The House of the Devil instead.

Is Emma Watson having her House at the End of the Street moment?

Some effective chills but certain aspects of the story will raise eyebrows.