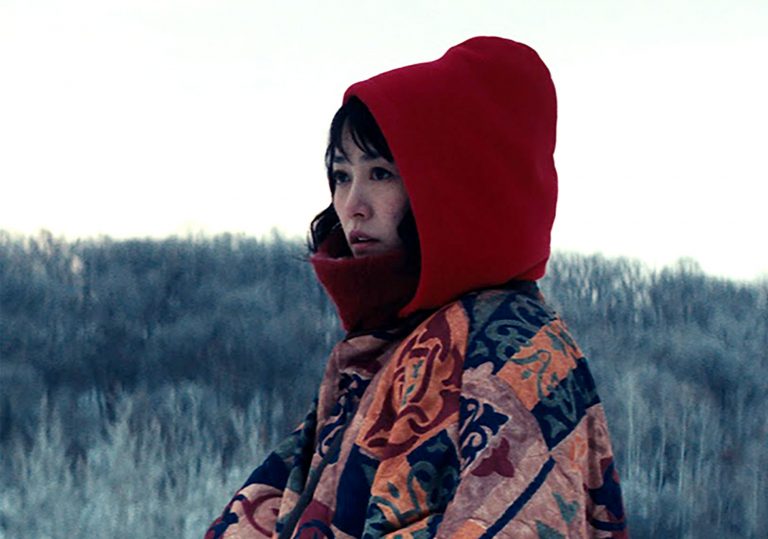 A major step up. A road movie which transcends its ultra-quirky log-line.

Bunzo the rabbit is an icon in the making. Spin-off franchise all but assured.

Cast your minds back to the Coen brothers’ 1996 film Fargo, where Steve Buscemi’s ratty hood, clutching a weeping gunshot wound to the cheek, hurriedly buries a briefcase full of banknotes in the deep Minnesota snow somewhere along an anonymous country road. Now, return to present day, and “reality”. Kumiko (Rinko Kikuchi) is a put-upon secretary in modern day Tokyo who self-identifies as a treasure hunter. With her rabbit sidekick, Bunzo, she spends her down-time trying to decipher cryptic maps, one of which leads her to a battered VHS copy of… Fargo.

Resuscitating the tape as best she can, she is able to spy through the electric mist a vision of a man burying a suitcase of cash. Fate has spoken: this is her next mission, and there’s nothing that can stop her from completing it.

Though it seems exactly like one of those movies which is far more fun to read about than it is to actually watch, credit must go to its makers, David and Nathan Zellner, for using this eccentric set-up as a way to discuss their own mystery: is Kumiko clinically insane to want to achieve this goal or is her odyssey any different from anyone seeking personal validation through some random achievement? And what is life if not a journey towards an ill-defined and probably non-existent goal? The reason why the film works so well is down to the immense empathy the Zellners extend to their characters.

Kumiko, a damaged young woman whose actions might be a reaction to her swaddling mother or sleazy boss, puts herself through immense psychological strain to reach her goal. The people she meets along the road are determined to help her despite having no real conception of what she wants, and this isn’t just due to a sense of cultural alienation.

A major step up. A road movie which transcends its ultra-quirky log-line.

Bunzo the rabbit is an icon in the making. Spin-off franchise all but assured.