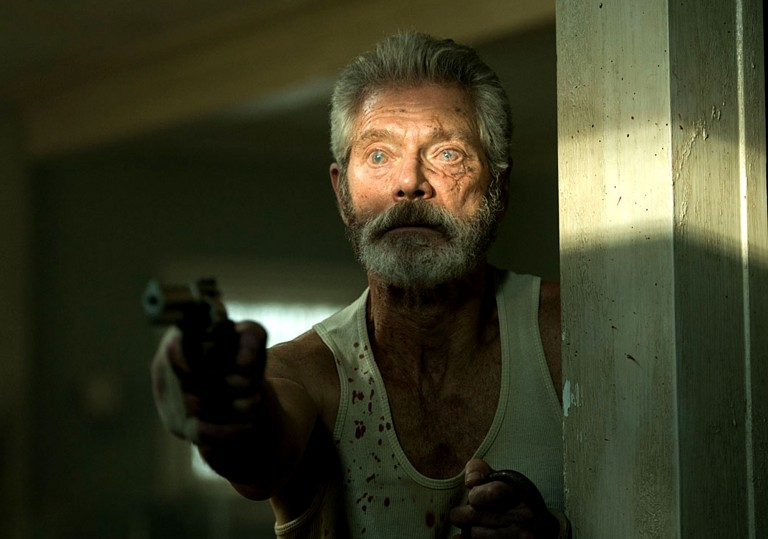 The Evil Dead director hangs up his supernatural hat and gives home invasion a go.

This cat-and-mouse horror serves up plenty of chills.

A trio of wayward twentysomethings plan one final robbery before getting out of the game in Fede Alvarez’s grisly home invasion thriller. Their target is a seemingly easy one: a war veteran who lost his sight in battle (Stephen Lang). He proves anything but – as Money (Daniel Zovatto) forewarns, “just because he’s blind, doesn’t mean he’s a saint”. Indeed, the blind man soon reveals himself as a slaughter-happy psychopath, ready to break the rules to protect a grisly secret. He locks the doors, board up the windows and turns out the lights, initiating a deadly game of cat and mouse.

An absent mother and a revolving door of stepfathers have hardened ragtag Rocky (Jane Levy). As she navigates this dark labyrinth – a kind of under construction Amityville with a ludicrous ratio of creaky doors and floorboards – the choppy editing style and low-lit cinematography amplify the film’s unsettling tone. Added to this, the man’s visual impairment doesn’t diminish the threat he poses to the would-be thieves. So does Don’t Breathe unexpectedly provide a positive representation of disability? Not exactly.

In fact, Alvarez employs some pretty insensitive stereotyping. The film’s antagonist creeps around on all fours, sniffing his victims’ shoes and covering his ears in agony to block out the slow hum of a washing machine. Even the film’s tagline, ‘he can’t see you, but he will find you’ appears to speak to his canine characterisation. Blindness is celebrated here only as a practised tool for the hunt, but putting that unfortunate detail to one side, this is a genuinely disturbing addition to the genre.

The Evil Dead director hangs up his supernatural hat and gives home invasion a go.

This cat-and-mouse horror serves up plenty of chills.