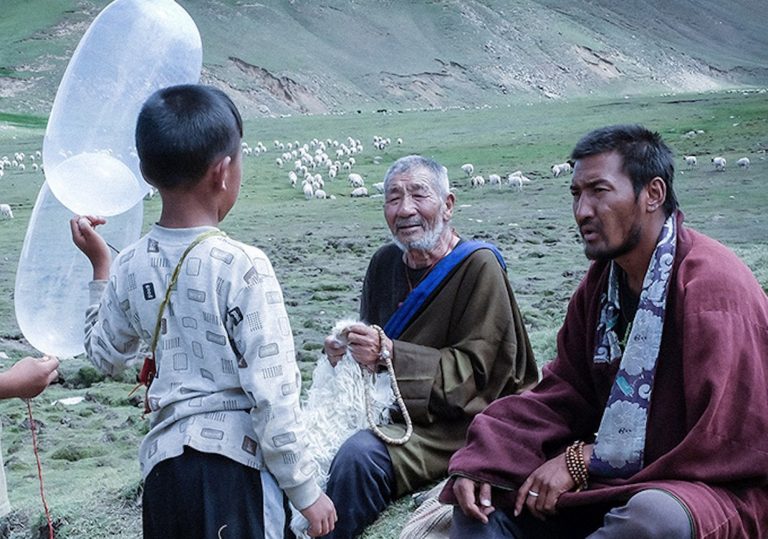 A little trip to Tibet for some social realism of a lightly sexual nature.

A small, perfectly poised film that doesn’t shoot for the moon, but also doesn’t put a foot wrong.

You come away not knowing if what you’ve seen was comedy or tragedy. Or maybe something else entirely.

This gentle sex comedy set among a Tibetan rural community explores intimacy, family and the hardships of life.

The sex lives of rural Tibetans are laid bare in Pema Tseden’s quaint but insightful Balloon, a film about the clashing ideals of free will and strictly abiding by the laws of the land. There are no actual sex scenes (of the conventional red light/sax music variety) in the film, and yet sex is omnipresent in the lives of these rich characters, from the scenes of a ram doing his biological duty in a pen full of ewes, to the young kids who mistake their father’s stash of prophylactics for a fun toy to be blown up and paraded around the steppe.

Drolkar (Sonam Wangmo) is pregnant with Dargye’s (Jinpa) fourth child, which must be aborted due to a nation cap on child rearing. Yet Drolkar, believing the unborn foetus to be the reincarnated soul of his recently deceased father, has other plans. Meanwhile, in a duelling plotline, Drolkar’s Buddist nun sister is mortified to discover that an ex she now despises has written a book about their relationship.

Tseden directs with a low-slung commitment to a dramatically heightened form of social realism, and this deceptively simple story ends up speaking volumes about how love, sex, marriage and parenting sit at a paradoxical remove from the dictates of the state, and the parochial attitudes of the older generation. The film is also militantly unsentimental, choosing to paint its characters in shades of grey rather than as lovable dirt-poor heroes that we’re asked to blindly root for.

A little trip to Tibet for some social realism of a lightly sexual nature.

A small, perfectly poised film that doesn’t shoot for the moon, but also doesn’t put a foot wrong.

You come away not knowing if what you’ve seen was comedy or tragedy. Or maybe something else entirely.