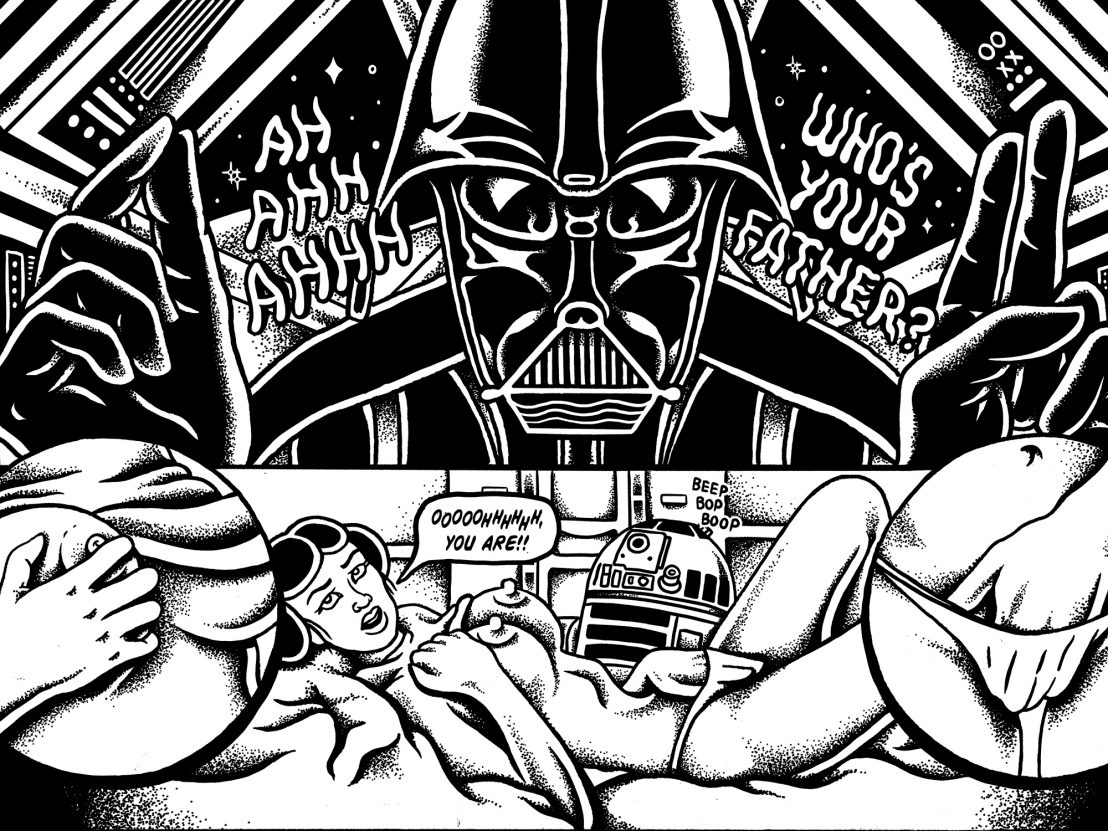 As one of the most pervasive pop cultural icons of the past one hundred years, Star Wars has o ered up ripe material for all kinds of mockery. One of those, inevitably, was the time-honoured porn parody. The rst wave of parody pornography arrived in the 1970s when American obscenity laws had softened to the point where major cities were able to screen feature length erotica such as Deep Throat, Debbie Does Dallas and The Devil in Miss Jones. The landscape of pornography, which was once hidden away behind closed doors, was suddenly out in the open. While the majority of audiences were still wary to be associated with an industry tied to the counterculture and, often, the Ma a, those sitting on the fence appeared to nd pornography wrapped up in a light comedy narrative more socially acceptable.

Companies like X-Play focus on parodying pop culture that has cross-generational appeal. Products like Star Wars and The Brady Bunch were able to connect with as wide an audience as possible. While there have been similar porn parodies of recent political events, such as Hustler’s infamous 2008 film, Who’s Nailin’ Paylin?, they don’t command the same budget or sustainable audience as a popular television programme. The high production values of some of these films have meant that most DVDs are bundled with alternative versions with the adult sections edited out so that home viewers can enjoy the parody without the sex.

Over the past few decades, pornography has only increased its presence in cultural and social circles. It does, however, remain a solitary and uncritical enterprise. Most discussions of porn are reduced to a question of ethics, while the discussions of artistic or even titillating merits saddle up with Justice Potter Stewart’s 1964 proclamation in the landmark Jacobellis v Ohio obscenity ruling: “I know it when I see it.” It almost seems unquestionable in 2016 that a film like Louis Malle’s notorious 1958 work, Les Amants, would be subject to an obscenity case, but what kind of critical advancements have we made since then in the discussion of eroticism and sex on screen?

As filmmakers like Gaspar Noé and Catherine Breillat tease the boundary between obscenity and art, it seems pornographers are doing the same. Porn parodies which bridge the gap between gratification and entertainment might actually offer an opening for critical engagement with pornography. In pornography and beyond, issues of desire and sexuality still seem glossed over, in particular in terms of aesthetics and thematic implication. As these filmmakers themselves strive to create better products, some of which are presented sans sex, this should be seen as a challenge to critics to follow suit and flex their sexual imagination in writing about eroticism on screen

A guide to five decades of…

Set in 2080, Star Babe was released the same year as A New Hope. In the lm, three sparkle covered Star Babes are sent to Planet Phallus where they need to recover some secret plans and prevent an alien takeover of planet earth. Very tangentially a parody of Star Wars, the movie does feature a Darth Vader costume, a stormtrooper mask and a cantina scene. Neither funny nor particularly sexy. It’s certainly an oddity in the annuls of cheaply made pornography of the 1970s. Extreme close-ups that completely abstract the body parts and actions they portray seem like a bizarre relic of the avant-garde rather than an erotic impulse. Disembodied genitals peek out of cheap Halloween costumes (including a gorilla, a werewolf, and Nixon) and are matched with the performers’ nonsensical impersonations of classic Universal monsters. With a mercifully short running time, this parody is a great document more than a great film.

Sex Wars is perhaps the most famous of the first wave of Star Wars parody films. Made just a few years after the release of Return of the Jedi, it arrived during the perfect storm of most SW superfans hitting early adulthood with the newfound accessibility of the VHS tape. Running up against what will become a major problem in most of these parody films, the movie splits the role of Leia over several women, making up for the gender disparity of the original series. Familiar as both pornography and parody, the movie has recognisable Star Wars iconography such as Admiral Ackbar and the crawling text that goes on and on and on. Remarkably, the film does have some expressionistic edges, including a blowjob intercut with a percolating volcano. And, in a subversive move, rather than shy away from the underlying incest inherent Luke and Leia’s sexual attraction, Sex Wars embraces it.

This seems to be more of a riff on Spaceballs than Star Wars, which make it a porn parody of a parody. Running at nearly three hours, the film features not only a whole lot more sex than the other films, but far more plot as well. Seemingly made by cinephiles, Space Nuts takes as many hits at Kubrick as it does Star Wars, including a funny extended sequence with Hal from 2001: A Space Odyssey. Fitting in as many sex jokes as possible (this is episode 69 and is centred on a ball-shaped chin Palpatine knock-off and Princess Hubaba), the combined running time of all the sex scenes eclipse the two previous parodies combined. The sex scenes often seem dropped in rather than integrated, and, inexplicably. all feature an overwhelming guitar shredding soundtrack. Hardly great cinema, this one is fun, though way too bogged down with lifeless and uninspired grinding.