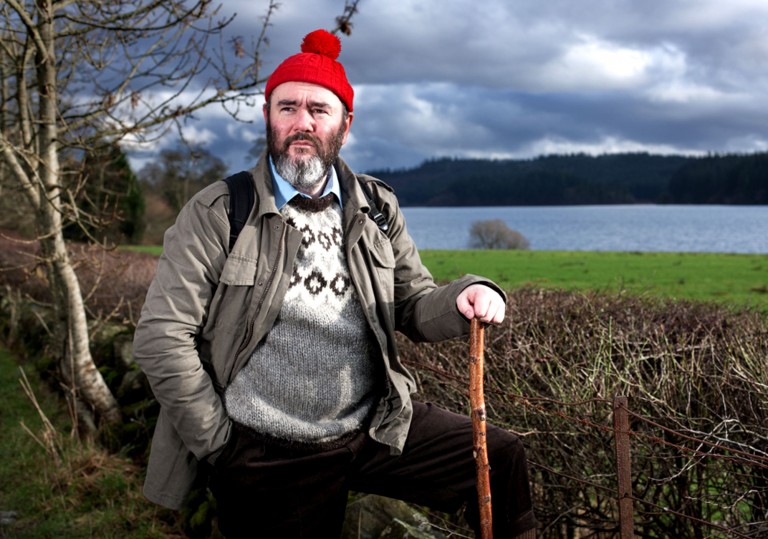 A Scottish cult hero teams up with a first-time director.

An infectiously entertaining, lyrical folk odyssey that reveals something unexpectedly profound about culture, language and storytelling.

One of those rare films that makes you sit up and take notice of something you didn’t even realise you cared so much about.

Why do we tell stories? For his debut documentary feature, Where You’re Meant to Be, director Paul Fegan embarks on a quest to crack this perennial conundrum with the help of former Arab Strap frontman Aidan Moffat. But what starts out as a ramshackle whistle-stop tour of Scotland gradually evolves into a disarmingly transcendent spiritual odyssey, as the pair distil a thousand years of Celtic lore into a simple, soulful ballad.

Thematically speaking, there are obvious comparisons with Welsh musician Gruff Rhys’ similarly charming and enlightening 2014 road trip, American Interior. Like Rhys, Moffat is a seasoned raconteur and a lyricist of great candour and wit, and there’s an irresistible romance to the way he sets about tracing his cultural heritage. Scotland may be known around the world for its whisky and curious proclivity for deep-fried confectionary, but the true essence of Scottishness, Moffat reasons, lies in his homeland’s rich tradition of passing down stories through the medium song.

As he travels around conversing with a miscellany of eccentric characters, from Highland battle re-enactors to Loch Ness myth-stirrers, the real star of the show emerges. Enter stage right, Sheila Stewart: a 79-year-old singer who, as the last in a long line of travelling folk royalty, is introduced as a proud bastion of a bygone era. Early on in their meeting, she clashes with Moffat over his insistence that the traditional folk songs she so dearly cherishes are ripe for a modern update, telling him in no uncertain terms that his proposal is tantamount to sacrilege.

Rather than allowing this unforeseen turn of events to derail proceedings, however, Moffat simply hits the reset button on his route planner and soldiers on, Stewart’s scathing rebuke still ringing in his ears but no less steadfast in his determination to bridge the gap between the past and the present. “Folk music needs a good editor,” he quips at one point, and you get the sense that he’s on to something. In the end, it doesn’t really matter whether the jaunty, salty tunes that Moffat strums out are more faithful to Stewart’s stories or his own. They could just as easily be about yours.

A Scottish cult hero teams up with a first-time director.

An infectiously entertaining, lyrical folk odyssey that reveals something unexpectedly profound about culture, language and storytelling.

One of those rare films that makes you sit up and take notice of something you didn’t even realise you cared so much about.