They Call Us Monsters 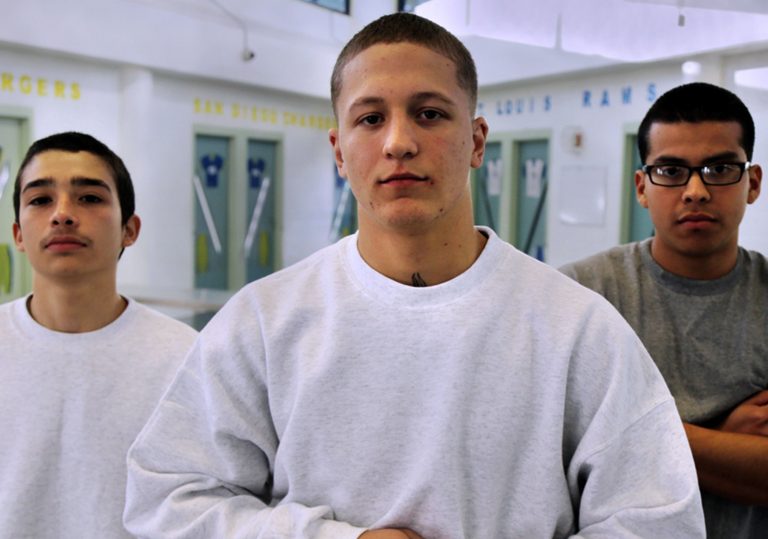 A film about the lives of young prisoners provides great dramatic potential.

The subjects are as compelling as they are disturbing.

Despite more than maintaining interest, the film could have delved even deeper.

Three young offenders open up about their brutal crimes in this revealing documentary.

This is a movie woven together from questions for which there are no answers. The subjects at its centre, all underage felons being tried as adults for acts of thievery and violence, are children in their joy and spirit, yet they seem at home with unforgivable actions in ways only monsters could be.

The movie asks three simple questions: 1) Which of the two are they; 2) To what end are they aware of the gravity of their crimes; 3) Does any of that matter? We leave the cinema torn apart for empathising with their youth even as we study the scar tissue they’ve left on innocent lives.

The Compound is a jail-within-a-jail, specifically designed to hold minors. Some of these inmates are too young to drive, yet many of them have already had children, dealt and been addicted to narcotics, and in some cases, even taken human life. We navigate this world through a screenwriting programme that allows three inmates to channel the emotions of their circumstances into a movie.

Screenwriter Gabe Cowan held weekly sessions with these inmates to gain a glimpse into their minds. Jarad, arrested at 16, faces 200 years for four attempted murders, one of which left a woman paralysed and wheelchair-bound; Juan, also arrested at 16, is serving 90 years to life for first-degree murder; and Antonio, arrested one month before his 14th birthday, faces 90 years to life on two attempted murder charges. Each of these young men displays supreme intelligence, sobering humility and preternatural self-awareness, yet they’ve frustratingly turned their virtues into instruments of mayhem.

It’s tempting to see these boys as being too young to fully grapple with the consequences of their actions, yet they show no naiveté in discussing themselves and their crimes. Rather than assigning blame, it’s easier to explain them away as products of their environments. All three grew up breathing in an atmosphere of impoverishment, living where there isn’t much to do but go to school or join a gang and sell drugs.

It might be a stretch to call them victims, but the film argues that they were born into and ultimately broken by a vicious cycle that long preceded them. If someone is nurtured in an environment in which violence is not merely acceptable but triumphed, are they entirely to blame for their follies? When Antonio very clearly expresses no remorse for his crimes, we suspect we’ve got our answer, even if it betrays our own feelings about human nature.

They Call Us Monsters raises some thought-provoking questions which are real and conflicting in isolation, but at a little or 80 minutes the movie as a whole feels like something of a missed opportunity. While it’s fascinating to see these young offenders open up via an ingenious script, it would have been even more so to witness their reactions to the finished cut. Imagine the quiet, vital revelations and added catharsis that might have been delivered by that scenario.

As it is, we’re left with a film that plays like the absorbing first half of a meatier, more penetrating exploration of these people and their follies. It contains a few unexpected turns, and it’s engaging from beginning to end, but in the end, we’re left with the crushing sense of story that had only just started picking up speed. These young men are as honest as they are hopelessly lost, and it would have been interesting to see a film that was brave enough to get lost with them.

A film about the lives of young prisoners provides great dramatic potential.

The subjects are as compelling as they are disturbing.

Despite more than maintaining interest, the film could have delved even deeper.