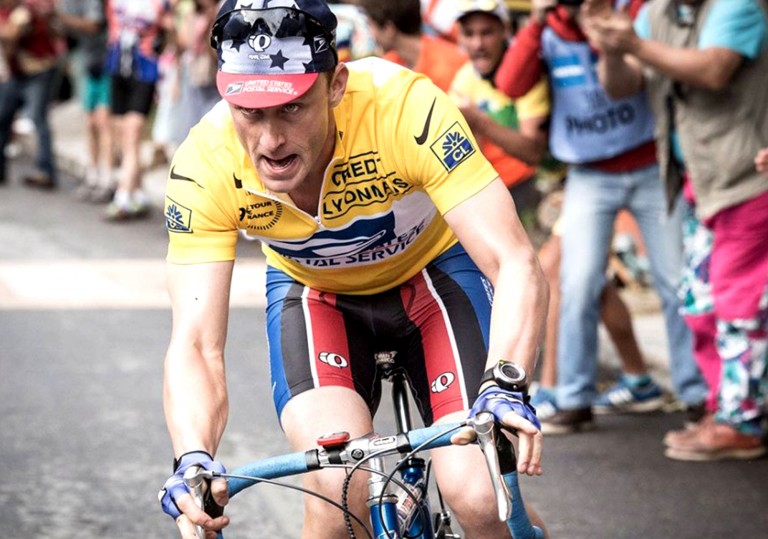 The Lance Armstrong story is one for the ages.

All the necessary components are there, but this slickly constructed machine only scratches the surface.

Can’t shake the feeling Lance is having the last laugh.

In most people’s eyes Lance Armstrong isn’t a cheat, he’s the cheat. The superstar who masterminded what the US Anti-Doping Association famously called “the most sophisticated, professionalised and successful doping program that sport has ever seen.” The all-rounder who rode to seven successive Tour de France victories, only to have his record ceremoniously struck out. The cancer survivor who helped the spread of a disease the race may never fully recover from. Cycling’s greatest winner and its biggest loser.

This is a sensational story about a spectacular fall from grace. It’s also a morally complex modern cautionary tale, the root and ramifications of which reach far beyond any individual or team. And yet, just three years after the USADA released its explosive statement on the investigation into the US Postal Service Pro Cycling Team, the Armstrong lie is already starting to lose some of its nuance.

It’s complicated. Armstrong is no victim, but it’s important that future generations keep sight of the wider context in which the man once affectionately known as “Le Boss” wound up trading in the yellow jersey for a pink slip. The media loves to boil a good scandal down to its binary essence, of course, and if the upshot of that is Armstrong becoming forever synonymous with the word ‘crook’ instead of ‘champ’, well, maybe that’s fair. He certainly hasn’t done himself any favours since being stripped of his Tour titles. Still, it must not be ignored that a systematic culture of doping existed within the sport long before Armstrong’s arrival.

How history remembers Armstrong will ultimately depend on which accounts of his triumphs and trespasses survive. Which brings us to The Program.

Though neither as exhaustive and urgent as Sunday Times journalist David Walsh’s 2012 book, ‘Seven Deadly Sins: My Pursuit of Lance Armstrong’ (on which this film is loosely based), nor as bluntly scathing as Alex Gibney’s 2013 documentary The Armstrong Lie, Stephen Frears’ slick, serviceable biography does a decent job of getting its message across. Fundamentally it’s a film that seeks to reinforce what is by now a widely accepted view: Armstrong was a brilliant athlete and a charismatic fraudster who discovered a way to rig the system. It’s what The Program doesn’t say that places it a safe distance back from the breakaway group (which includes Tyler Hamilton and Daniel Coyle’s ‘The Secret Race’).

During a clunky expositional preamble we’re introduced to a promising young rider from Texas who heads to Europe dreaming of glory, only to return home well and truly humbled. Years pass. Armstrong returns fitter, hungrier, more focused. From here Frears and screenwriter John Hodge waste no time seizing the opportunity to do something only a partly fictionalised version of the truth could: taking us inside Armstrong’s camp to expose the shady dealings, post-race blood transfusions and routine cortisone and testosterone injections that fuelled his success. All of which makes for fascinating if hardly revelatory viewing. Does it dig deep enough? Not by half. At least not if you’re looking for a genuinely insightful dramatisation.

Let’s be clear, Frears and Hodge aren’t guilty of fudging the facts. It’s more that The Program lacks the basic imagination, conviction and ruthlessness required to tell us something profound about Armstrong and doping at large. Perhaps that’s asking too much of a film that seems to have been precision-tooled to provide a clean and concise summary of events, especially when you consider that its release falls at a time when Armstrong is embroiled in numerous ongoing lawsuits. By no means the complete picture, then, but by all accounts an accurate character assessment anchored by a fittingly seductive central turn from Ben Foster – although we’re not convinced that an actor of his ability needed to go as far as taking EPO, as Foster confessed in a recent interview with the Guardian, to fully get to grips with the minutiae of performance enhancement.)

One area where the film gets it right is Armstrong’s conflicting public and private personas. The iron-willed fighter, the pathological egotist, the flat-track bully, the dedicated charity worker – Foster nails them all. Somehow, however, the real Lance Armstrong remains tantalisingly out of reach. To be fair, even Oprah Winfrey – queen of the televised tell-all – found him to be an evasive, combative customer. The real frustration here is that, for all that Foster’s uncanny transformation lends the film a superficial air of authenticity, this is the kind of oversimplified, unsympathetic portrayal you can imagine Armstrong eventually profiting from. Because if there’s one thing Tiger Woods has taught us, it’s that there’s big bucks to be made from delivering a convincing mea culpa.

In a late bid to keep us invested in a narrative we already know the outcome of, Dustin Hoffman pops up as Bob Hamman, the Dallas businessman and cards player (who Walsh describes in his book as “the Lionel Messi of bridge”) whose SCA promotions company paid upwards of $12m in bonuses during Armstrong’s career before successfully suing him and the now defunct Tailwind Sports Corporation in February 2015. Up to this point much of the dramatic thrust has been provided by the interaction between Foster’s Armstrong and Jesse Plemmons’ Floyd Landis, the wide-eyed understudy who finally blew the whistle years after being cut loose from his mentor’s inner circle having himself tested positive in 2006, yet it’s Hamman and his lawyers that dominate the third act.

A less conservative filmmaker might have explored the devastating long-term impact Armstrong’s actions had on the personal lives of people like Landis, as well as the professional lives of Hamman and Walsh (played here by Chris O’Dowd). And spare a thought (The Program doesn’t) for Armstrong’s masseuse, Emma O’Reilly, and Betsy Andreu, the wife of Armstrong’s former teammate Frankie, both of whom were publicly defamed for providing crucial testimony during the USADA’s investigation. That neither receives a generous amount of screentime isn’t such a big deal. That so little is revealed about the victims and their stories – Lance couldn’t have planned it better.

The Lance Armstrong story is one for the ages.

All the necessary components are there, but this slickly constructed machine only scratches the surface.

Can’t shake the feeling Lance is having the last laugh.