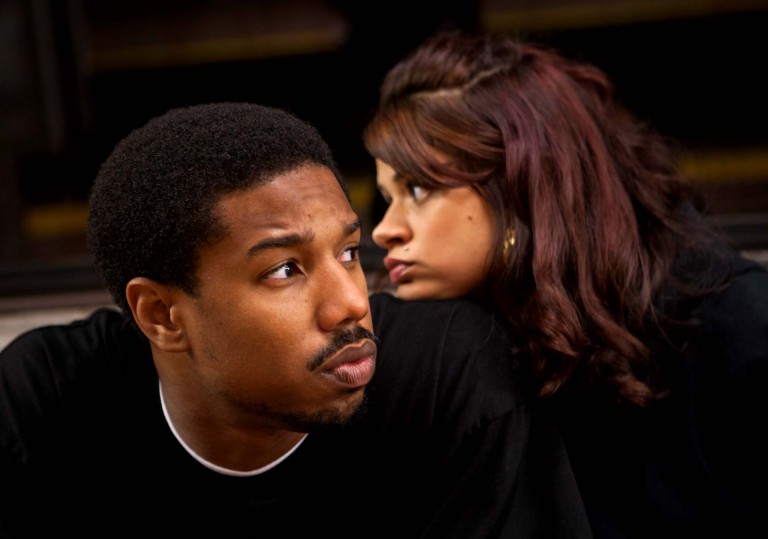 Just… no. This is heartstring-tugging hooey.

A technically strong, but also dishonest piece of filmmaking.

There’s an old Hollywood dictum which states, don’t shoot the puppy. With his debut feature film, writer-director Ryan Coogler does not simply shoot the puppy, he shoots two puppies. The first is literal, a stray mutt that gets smashed to bits when it haplessly strides into the fast lane. The second is figurative, an ex-con named Oscar (Michael B Jordan) who is the film’s Old Yeller. Coogler spends a good 90 minutes petting and prodding and hugging and ruffling his hair before mercilessly putting him under the gun.

Essentially a remake of Gaspar Noé’s Irreversible, but reversed, Fruitvale Station is an exercise in sentimental histrionics and battering-ram manipulation, with the moral of the story being, you’re never too lovable to get whacked. Try, if you might, to choke back the inevitable tears brought on by the climactic 20 minutes, but these are tears which have been earned via crooked means.

We join Oscar at the point where a new leaf has been turned. Prison has taught him a lesson, and instead of making a quick buck on a monster weed sale, he’s emptying the package into the wind so he can spend more quality time with his adoring wife and child. His violent past is used purely as a counterpoint to make this avuncular “changed man” appear all the more appealing.

The wistful naturalism of the performance makes the melodrama easier to swallow, but the film as a whole comes across as a parody of those war films where you hear a wide-eyed private proclaim how much he’s looking forward to seeing his wife and unborn child before embarking on a mission code-named “Total Annihilation”.

Coogler seems desperate to paint Oscar as a saint. If this brash film is part of a political protest to bring Oscar’s killer to justice, it actually might have done more to muddy the fine details of the case.

Just… no. This is heartstring-tugging hooey.

A technically strong, but also dishonest piece of filmmaking.