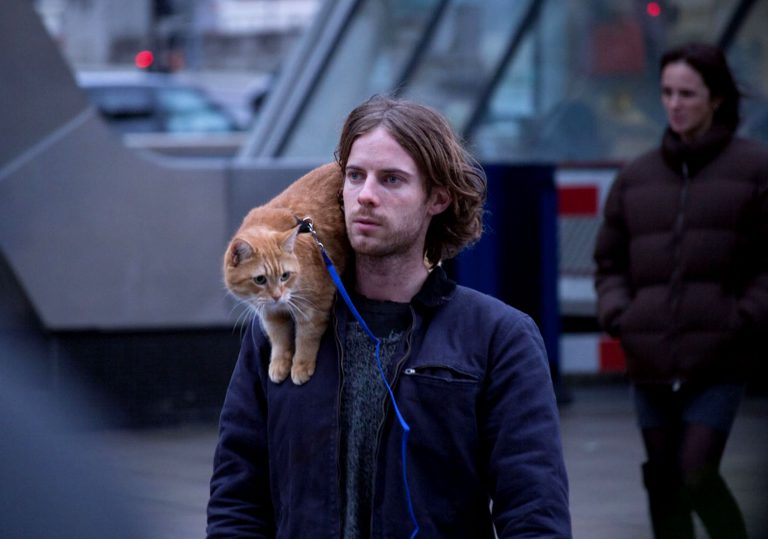 How can you not love a film about a cat?!

Can Bob really save this film?

Bob the cat steals the show in this unapologetically feelgood festive drama.

As anyone who owns either cats or dogs will know, after a long day at work there is no shame in returning home and talking to them. But if you engage in this patter, the instant thought occurs: is this just me? The silent wisdom of an animal, or our belief that they are really listening, can be a tonic for despair.

A Street Cat Named Bob is the story of James Bowen, a former drug addict who lived rough on the streets of London. Bob, a stray tomcat with whom he strikes up a happy friendship, becomes his hero and redeemer, transforming the life of this one-time transient. However this film, directed by Roger Spottiswoode, is no saccharine fairy tale. It may not sound like a child-friendly fable of hope and happiness, but as with the internationally best selling memoir on which it’s based, it is absolutely that.

Transposing this wispy tale to the big screen must have been no easy feat, but the director and lead Luke Treadaway grapple with the task admirably. Indeed, Treadaway’s fine central turn means that nearly 90 minutes of a one-sided conversation with a loveable moggy ends up being unfeasibly entertaining. The film’s achilles heel, however, is its struggle to be both hard-hitting and humorous. Style-wise, it’s also a mite clunky, swinging between seriousness to silliness at the drop of a hat. This unfortunately softens the humour and dampens the sense of emotional gravitas.

During the scenes of James going through cold turkey, it’s hard to accept all this dramatic weight after we’ve just been party to a comedic cat and dog chase through the London streets. In spite of its flaws, A Street Cat Named Bob remains a true-blue heartwarmer. The passion at its core is palpable and, of course, Bob purrs his way into infamy. When a lovely lady knits him a little scarf, cuteness levels cannot be contained. It’s a family film that raises real issues in a sensitive way. And for that it should be praised.

How can you not love a film about a cat?!

Can Bob really save this film?