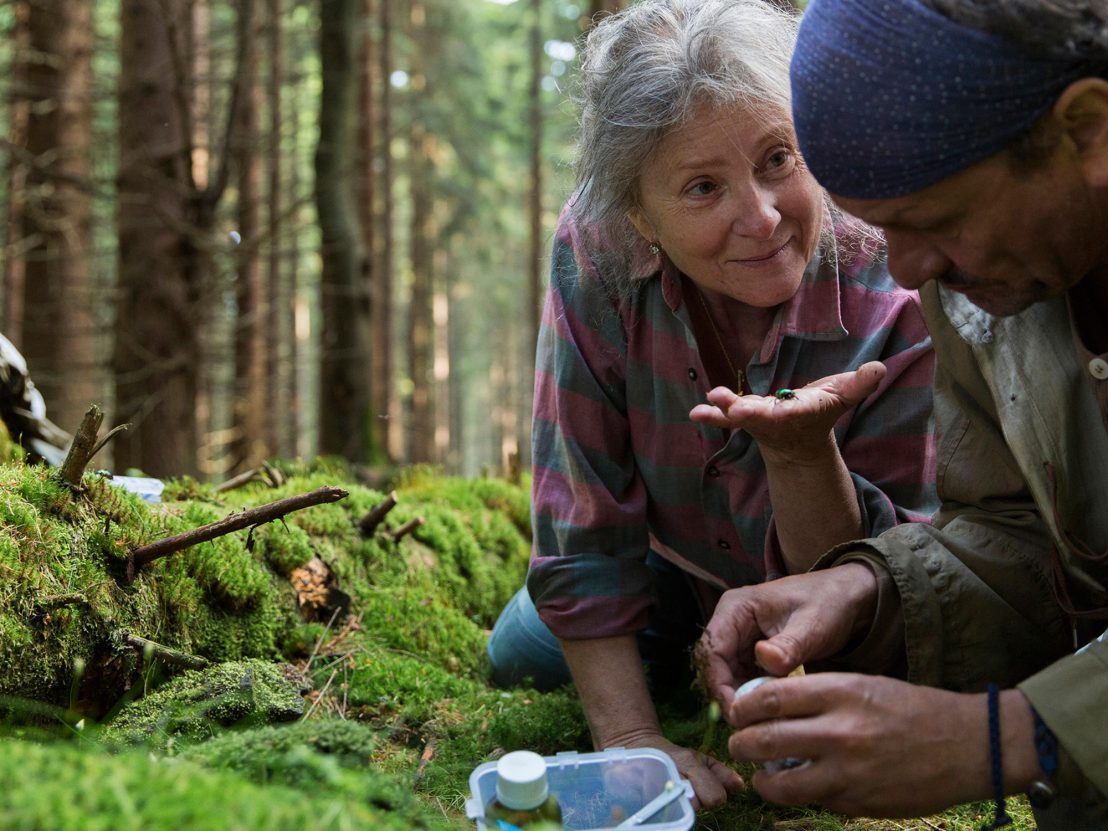 A quaint, bordering on surreal, murder mystery is the latest from veteran Polish director Agnieszka Holland, but it’s a film that, formally speaking, bares signs of her latter-day work in television. All eyes are on the rosy-cheeked, lank-haired Janina Duszejko (Agnieszka Mandat-Grabka) who lives alone in a tumbledown cottage, out on the punishing plains of the Polish countryside. The furniture she owns (collects is a better word) is browned and distressed, while all surfaces are festooned with random trinkets that she just doesn’t have the heart to throw away.

She is also a militant advocate for animal rights, and it’s soon revealed that her house is smack dab in the middle of a state-sanctioned hunting zone. Her natural interest in the surrounding flora and fauna is only interrupted by gun-toting scallywags looking to cause GBH to anything with fur that moves. Her protestations that animals should be included under the auspices of the commandment “Thou shalt not kill” are laughed off by poachers, police and even the local priest, who assures that God’s word was intended solely for a human audience.

Janina (though she prefers to be referred to as Duszejko) makes for a fascinating, enigmatic hero, and the true extent of her wily nature, and just how far she’s willing to stick her oar in to save the critters she loves, is revealed slowly. Holland doesn’t present her as a barmy lone-gun activist, more as someone willing to look at the realities of a situation and devise the best solution for each problem she faces. She springs from an old guard of political activism, harking back to a time when the stakes were a little higher. The film suggests that these young punks don’t know how good they’ve got it, or that a robust resistance could pounce from nowhere. Matters in the past were worse, and she sees the wheel turning around once more.

Although Holland’s film doesn’t wear any brazen allegorical tendencies on its sleeve, it plays the genre elements of the material with a relative poker face. Spoor is about how, sometimes, the only way to stop suffering (human and animal alike) is to inflict pain on the instigators as a way to demonstrate to them what it feels like. Moves are made to keep us on Duszejko’s side, and Mandat-Grabka’s warm central performance recalls Imelda Staunton in Vera Drake and, from certain angles, a Silkwood-era Meryl Streep.

The bad dudes (all the antagonists in the film are men), meanwhile, do have a moustache-twirling nastiness to them. Borys Szyc’s Wnetrzak is the major douchebag owner of a hunting lodge-cum-brothel, and he’s first seen taunting emaciated caged foxes which he skins alive for the pleasure of it.

Perhaps the obvious literary source (it’s adapted from Olga Tokarczuk’s amazingly-titled, ‘Drive Your Plough Over the Bones of the Dead’) and the larger-than-life characterisations could act as a barrier towards wider acceptance by those drawn towards the film’s more macabre elements, such as the moment where Duszejko is seen with a zombie-like flaking skin condition, which has cleared up a few scenes later and is never mentioned again. But the eccentric interludes and a predilection for low and lazy pacing help this homemade tonic slip down easy enough.